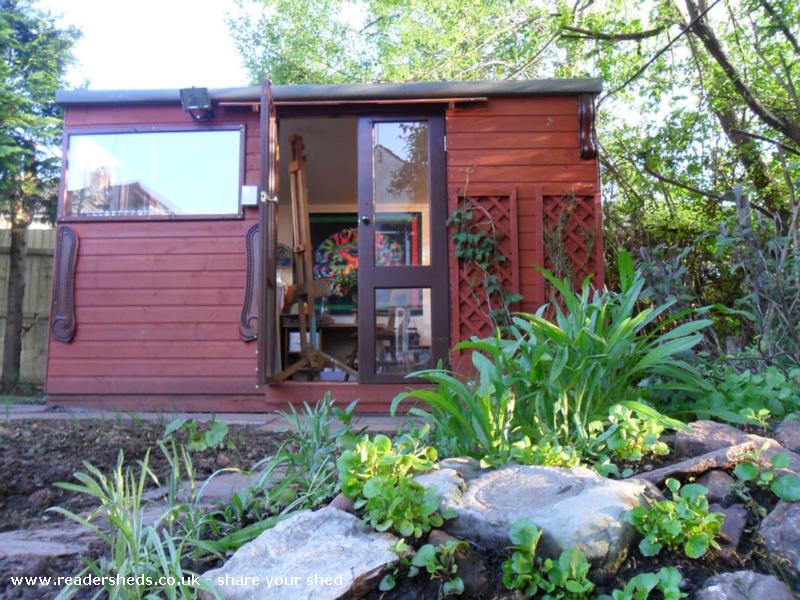 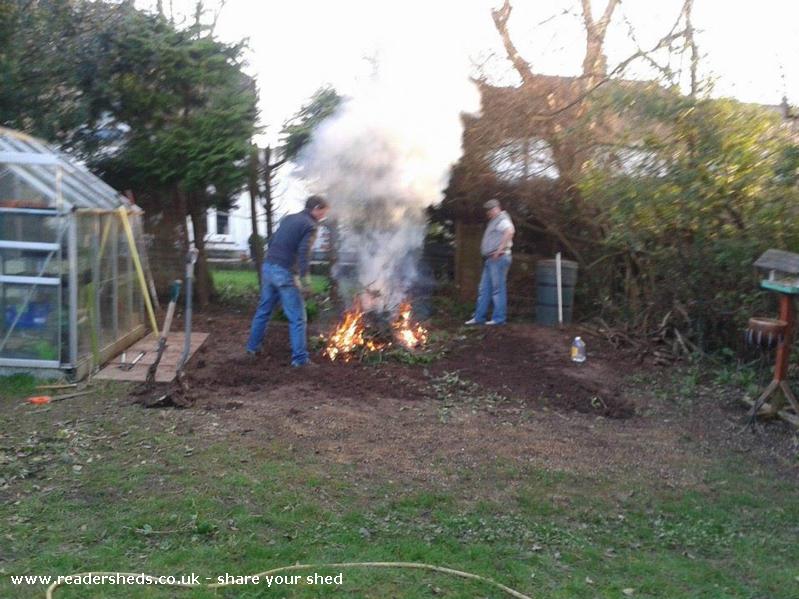 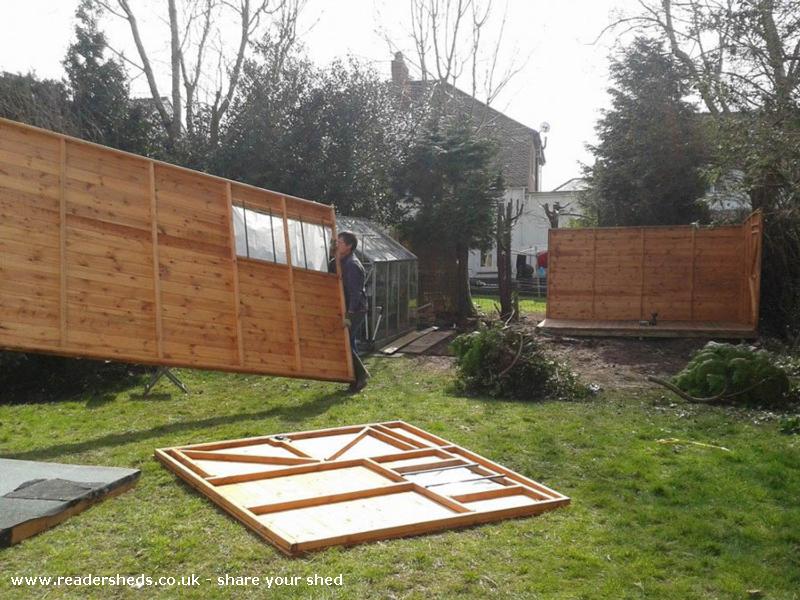 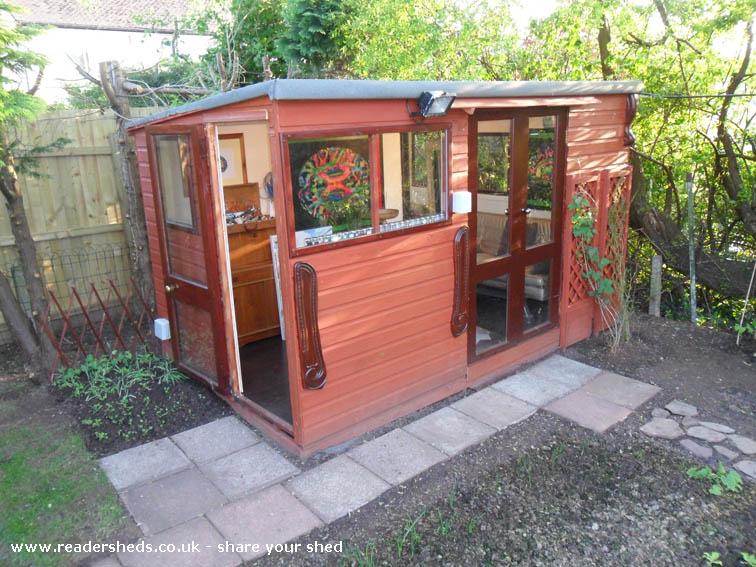 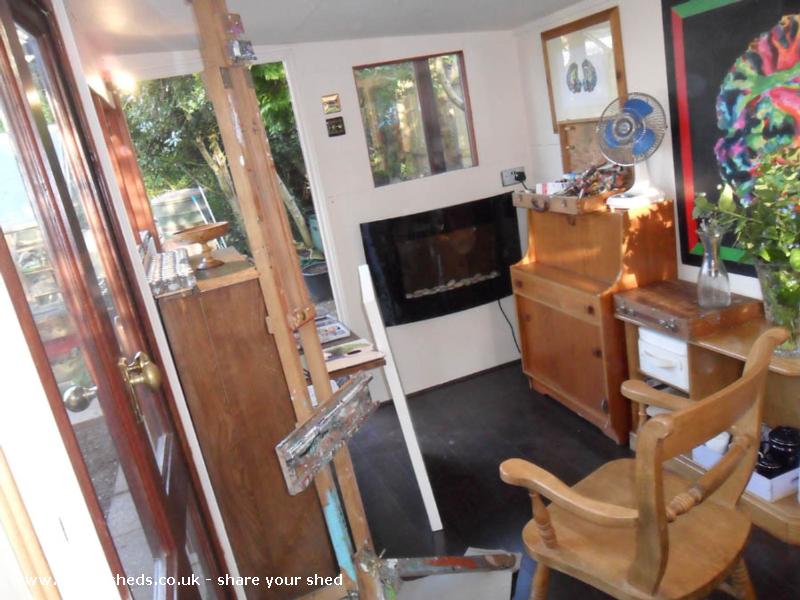 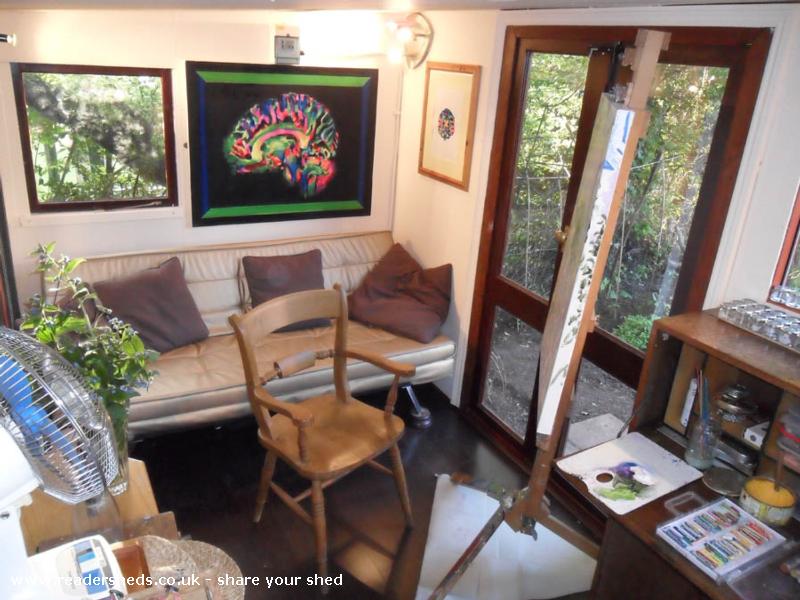 All photos are copyright of the sheddie Penelope Rose

My shed, The Cyncoed Fine Art Studio is all an artist could dream for. Put together with a sense of urgency as I had been with out a studio for seven months due to a sudden move just before Christmas from our previous house to the flat with a garden we are now living in. I was lucky to have a studio for the last six 6 years at the old house (the oil stunk the house out though).

The need to brush oil and pigment on the canvas is overwhelming and the wait was intense. In the interim my husband and I put all our energy into shaping up our new garden. In winter we began a charge, to the back of the garden, against the thick tall brambles, layers of leylandii prunings, roots, sticks, bricks and rocks gathered from six years of the garden lying fallow and neglected, according to all our lovely new neighbours.

We tore and toiled and fired up the earth, riddled tons of clay and top soil mixed with years of decomposed detritus. We gained an extra 20 by 30 foot ready to place the perfect She-space (the shed). Therefore, with a little budget that was drawn down from a small pension belonging to David, my husband, we began work only six weeks ago with help for the construction from our mate Lee (my daughters father).

All the materials were sourced meticulously by David via ebay, freecycle and gum tree. The shed and 9mm plywood was sold to us by our friend nicked named Jeff the Shed for obvious reasons at rock bottom prices for he knew our budget and wanted to help get me back painting again. I levelled the ground and Lee diligently assembled a timber framed base, floor, walls and pent roof, with a little help from us to hold stuff. He sawed out an extra hole for a new window and took off the old doors. I was very concerned that my studio should have enough light.

Placed south at the bottom of the garden surrounded by trees meant no south light. David and Lee made the best of this by sourcing and collecting; a beautiful old oak door from Bristol for a penny! With two glass windows the larger at the top and the smaller by roughly a third below dimensions inline with the golden ratio. Two mahogany French doors from Western-Super-Mare for ﾣ20 the style and ratio very similar to the old oak door. Two local 70s bureaus one free from Gumtree and the smaller for ﾣ35 from ebay. A cabinet found on the side of the road. An Electric fire from a lady ebayer whos husband had sadly died recently and did not know why he had bought the fire sold it to us for ﾣ60.

The insulation was an absolute bargain at ﾣ150 David found an ebayer selling job lots of Kingspan insulation he ended up buying three times more than we needed so one third we sold on at ﾣ150 still a bargain to a guy from Pembroke dock. Who is building his own house for his wife and kids. The rest we have given to a friend to finish his man cave. The flooring is engineered bamboo thin beautiful and strong and was sourced from Gumtree. The chap was just about to go abroad for a few months the so a quick sale was negotiated at ﾣ75 one Sunday morning the day before he left.

Davids father Ernie sadly passed away recently. With his fathers old tools, left over paving slabs, a tub of magnolia paint, a rose bush and Jasmine and a passion passed on from his father David sparked life into the soil and transformed the garden. The paint I kept for the studio walls. A local stables offered manure via ebay. We filled up a boot loaded in golden bags supplied by the lovely owner of the show horses super rich magic manure. We mixed this into the veg patch in front of the studio and David with the help of his son Martin built a path leading up to and around the studio. I created a rockery for the herbs and such. We generally tided up the area ready to plant all that David had started to grow in the green house.

Once all the fundamentals had been finished mainly by lee, I then painted the walls and ceiling magnolia. One of the first items David had sourced very cheaply was a box of shiny sockets, dimmer switches and funky spot lights which look superb now the walls are painted.

The studio is light, useable all year round come rain or shine. The north light refracting evenly to all corners. A gold sofa-bed bought locally second hand for ﾣ50 really looks stunning. The cushions that match the floor were bought for 99p from ebay and you can imagine our surprise to find out that the ebayer is our neighbour.

Just as I had finished arranging the last of my art material and hanging up my most recent art + science painting and pen and inks, David noticed an article about a week ago on Wales online for the Shed of the Year 2014 amazed by all the entries, we are proud to compete for a bit of fun and notoriety for our efforts. We love our shed!!

To show off our hard work we are having a grand unveiling of The Cyncoed Fine Art Studio this weekend with Pimms on the lawn.