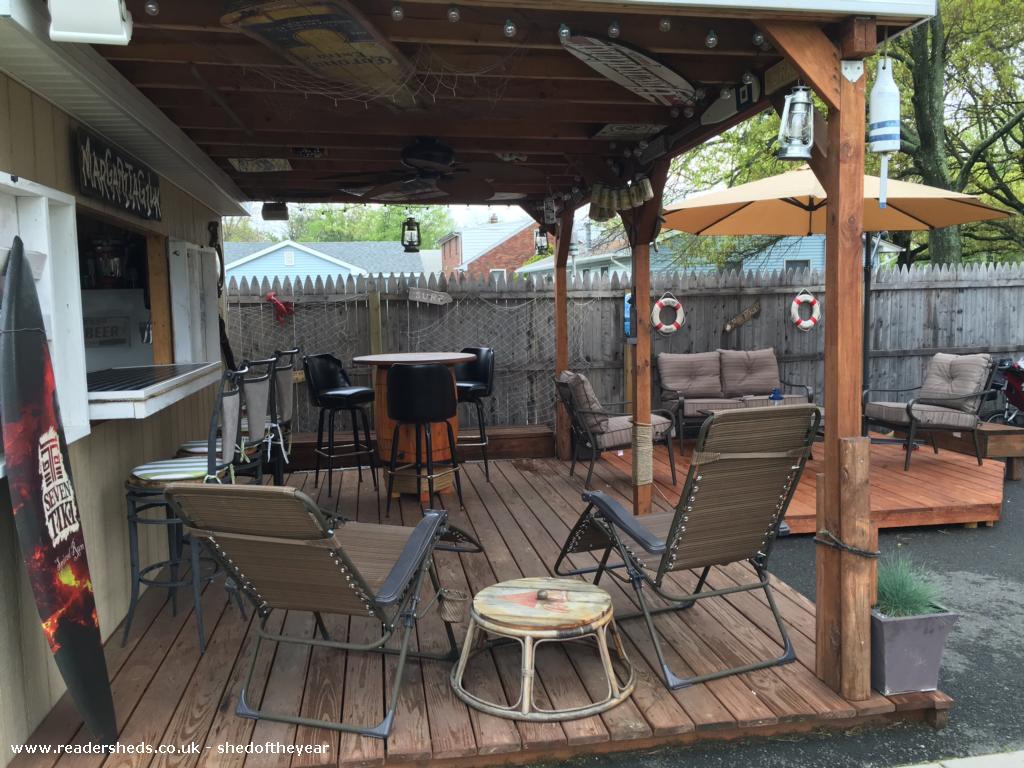 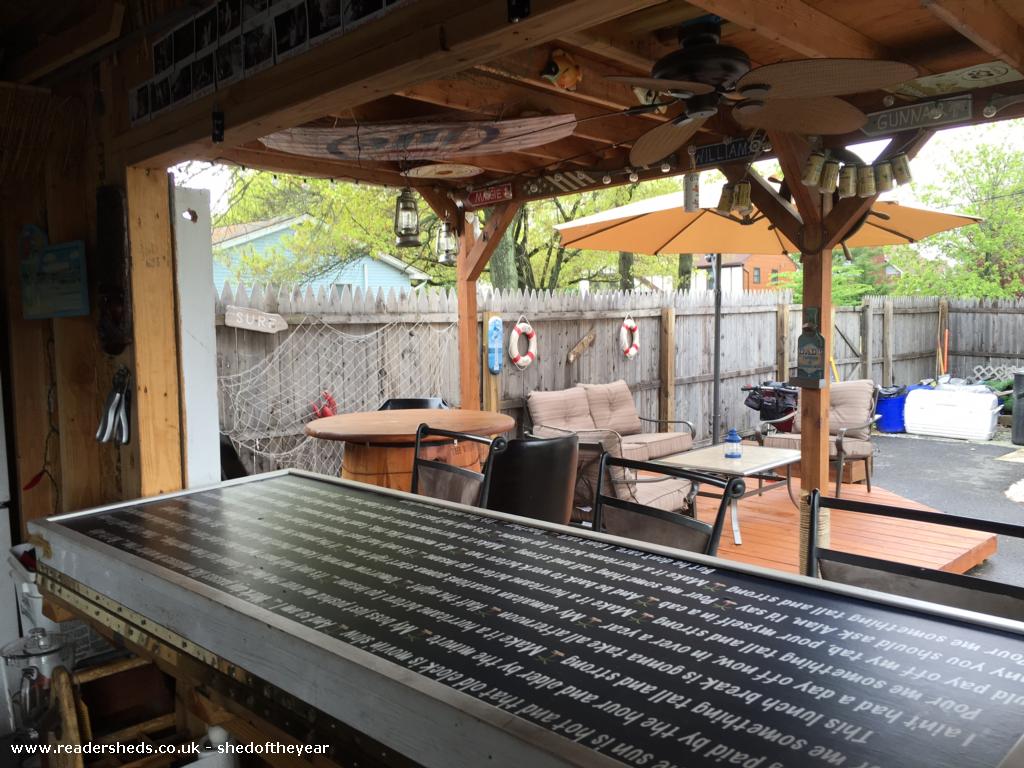 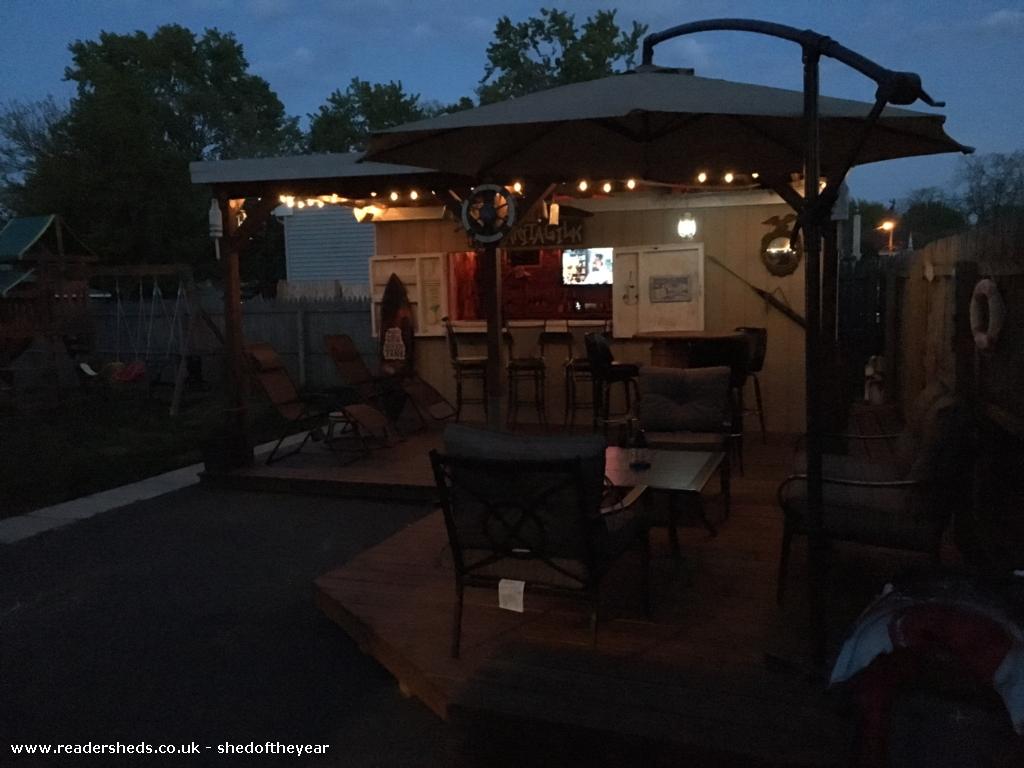 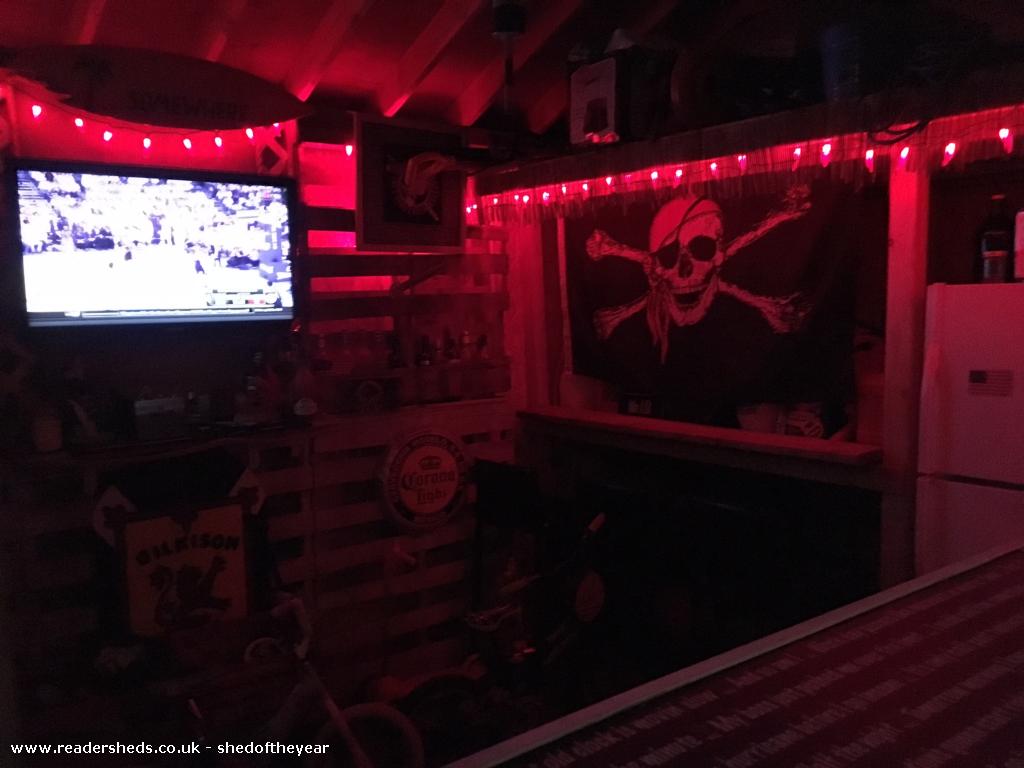 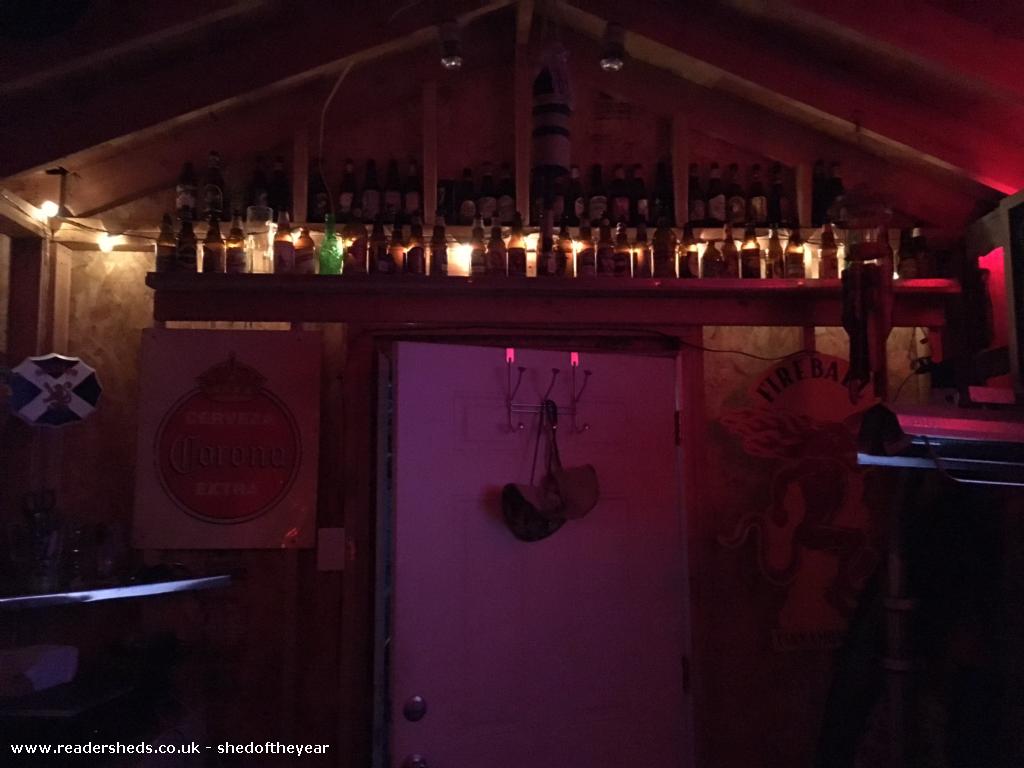 All photos are copyright of the sheddie William and Katie Gilkison

In 2012 we lost our shed in Hurricane Sandy here in Union Beach, New Jersey. We decided that we were going to build a wood shed, 16 x 10 to replace it. As we began the building process we had an idea. What if we cut a hole in the side of the shed to serve as a bar. Sounded like a great idea to start...but how would we be able to seal the shed in the winter. The answer...a bar top that was on a piano hinge so that it could be pulled back into the the shed as the side wall of the shed acted as window. This idea allowed us to open the bar up in the summer, yet, keep it sealed in the winter. Now that we had this great bar idea...where would we get shade from? We then decided to build a 16 x 10 roof that would extend off the of shed to create shade. Once we finished the roof...we had another idea...lets build a deck and create a dock like feeling. That is right a dock like feeling for a little back yard shed bar named "MargaritaGilk." An escape from the real world...our own little backyard paradise. Now we had the foundation for a shed bar inspired by Jimmy Buffett and the vision of something you might see sitting on an island somewhere in the Caribbean. It became a family project and a place that we could enjoy together.

What makes this shed bar unique is that it still acts as a shed. We tried to recycle items throughout within the design concepts of the shed. Pallets are used as not only decoration but shelving. Old bar stools, a beer barrel, and signage was all refurbished and used throughout the bar. We had a decal printed that we adhered to the top of the bar with the lyrics from Alan Jackson and Jimmy Buffett's "It's 5 O'clock Somewhere." The lyrics had meaning to them and helped tie the themes of the bar together. A lot of garbage picking took place as the bar took shape. New furniture was not in the budget, nor fit the feeling we wanted to have when utilizing the space. Plus it provided opportunities to do things as a family while we reconditioned and re-purposed the items we came across. Over the years, we have seen ideas we liked and have been able to apply them to our backyard setting. We added a Television to the area which was initially planned to utilize to watch sporting events, but actually turned into a movie theater like setting for our children. They could take a break in the shade during the summer and watch one of their favorite shows or movies without having to go inside to do so.

What really makes this shed bar unique is its ability to transform from an outdoor paradise in the summer....to an indoor man cave in the winter. The piano hinged bar top allows us to close the bar up and provide a heated entertainment space. While adding additional storage next to the refrigerator, we also added a bar ledge mainly to be utilized in the winter months. The shed has not only fulfilled our storage needs, but also has provided us with a space we can enjoy with each other!