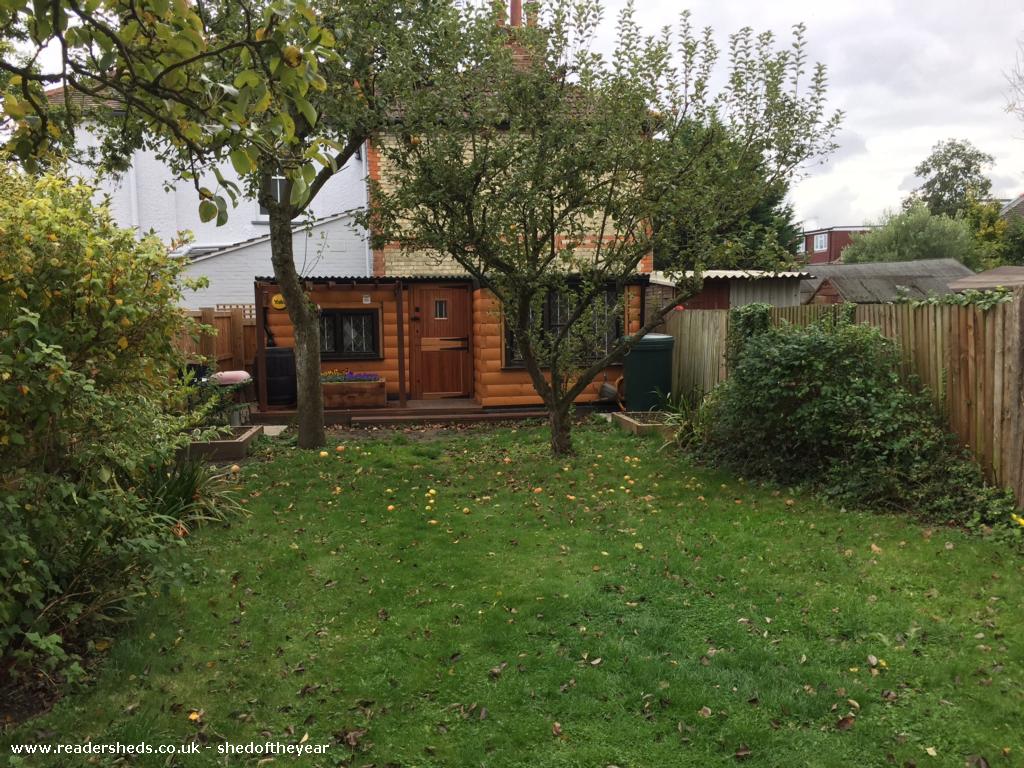 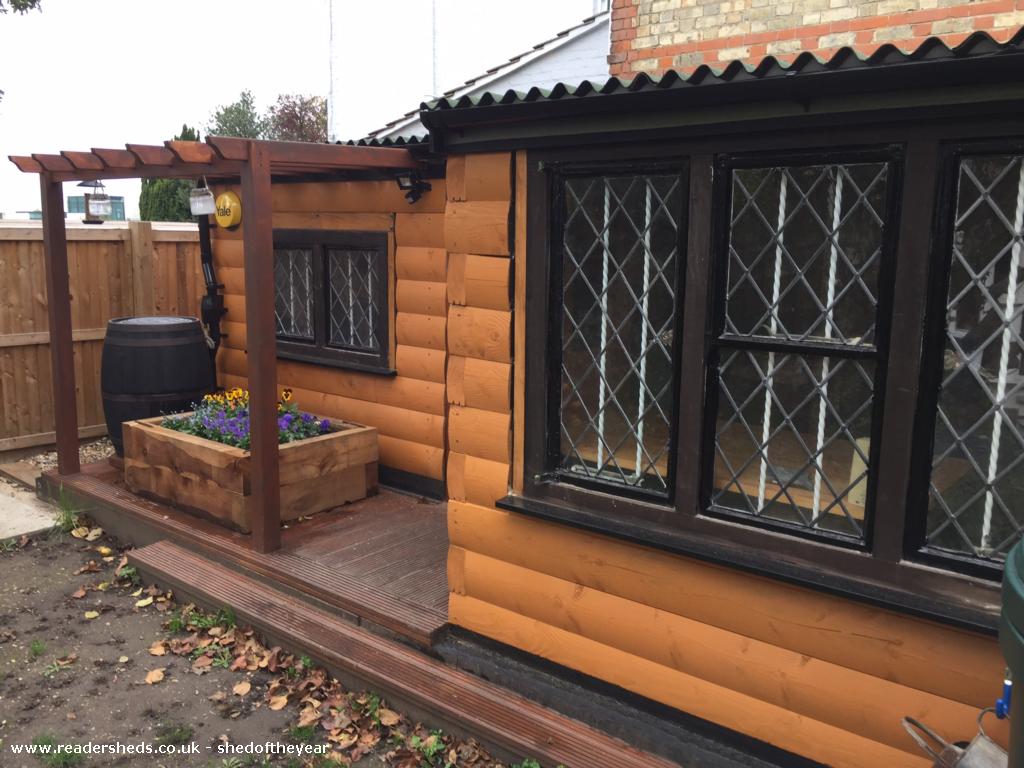 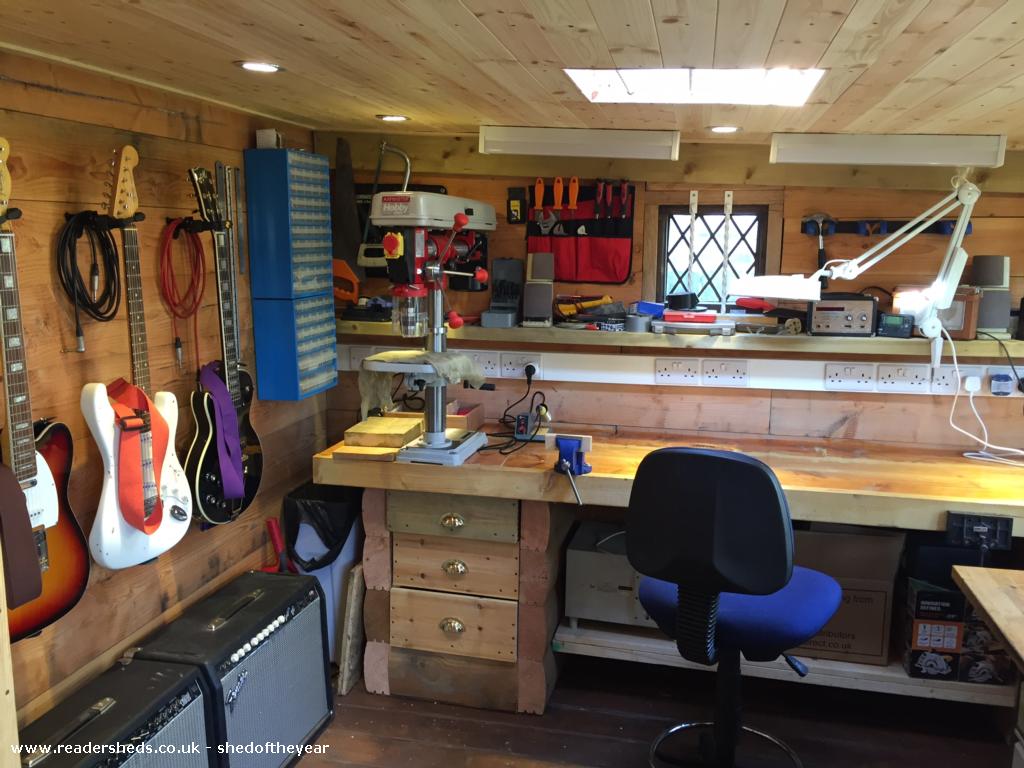 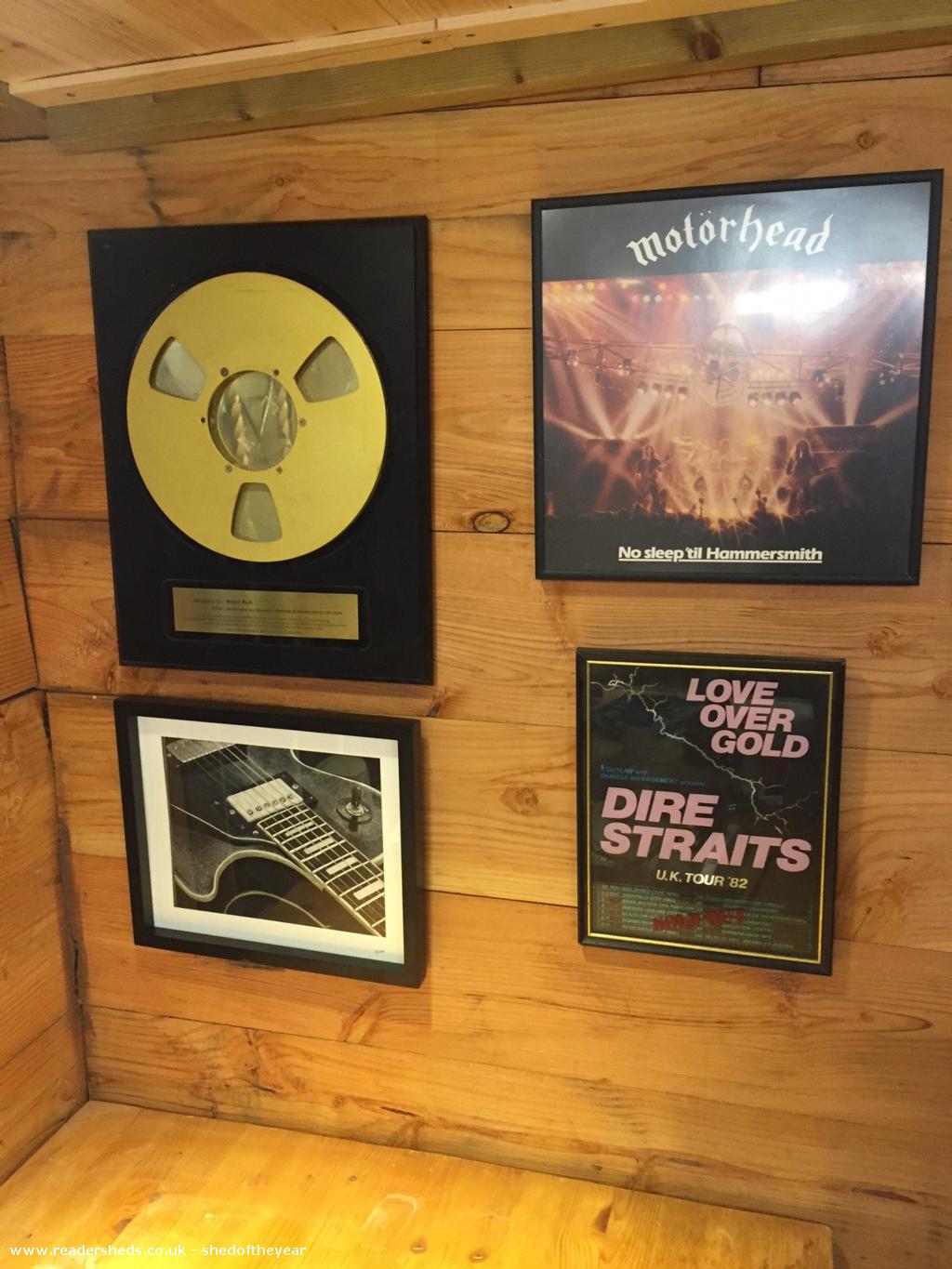 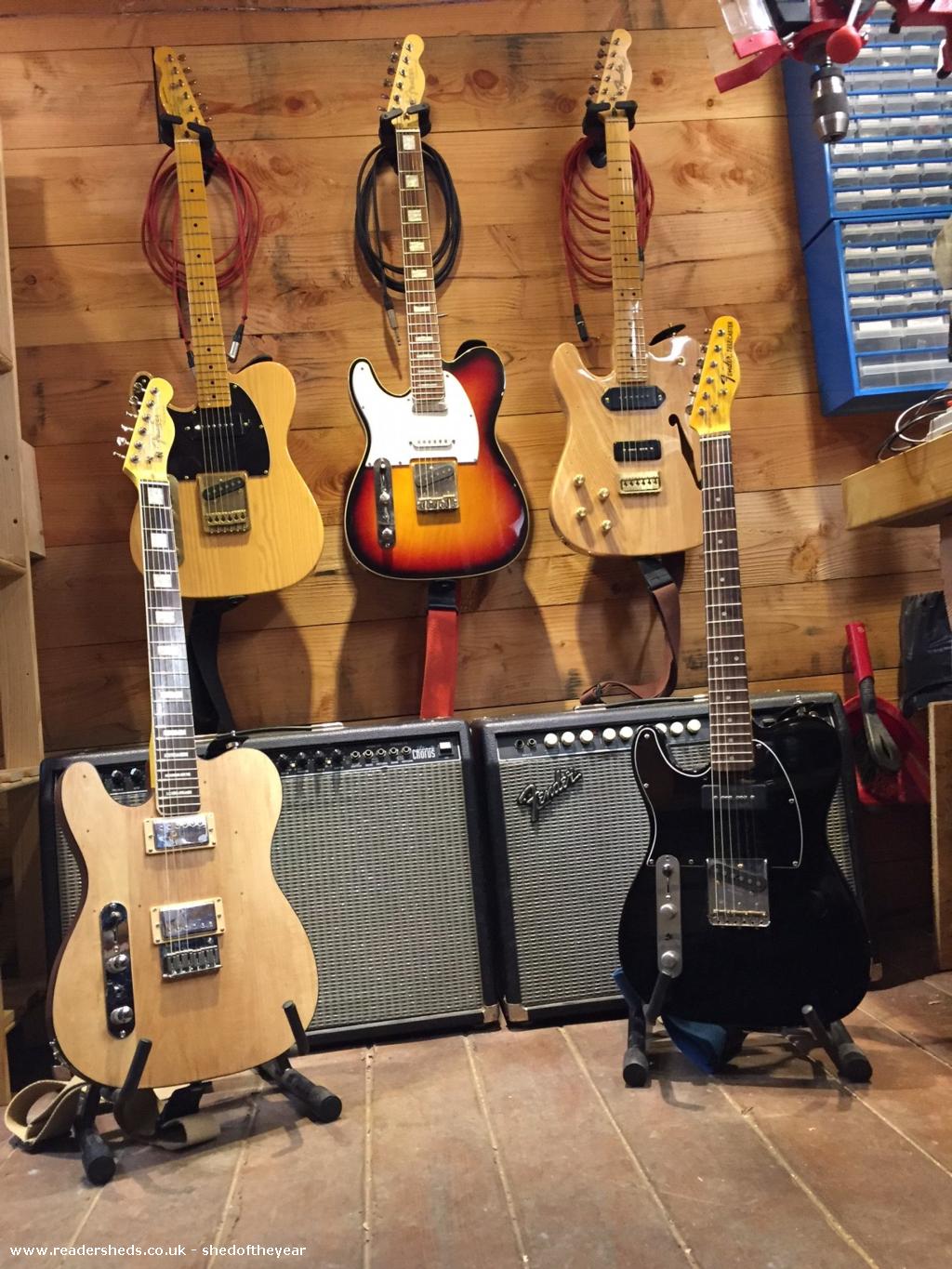 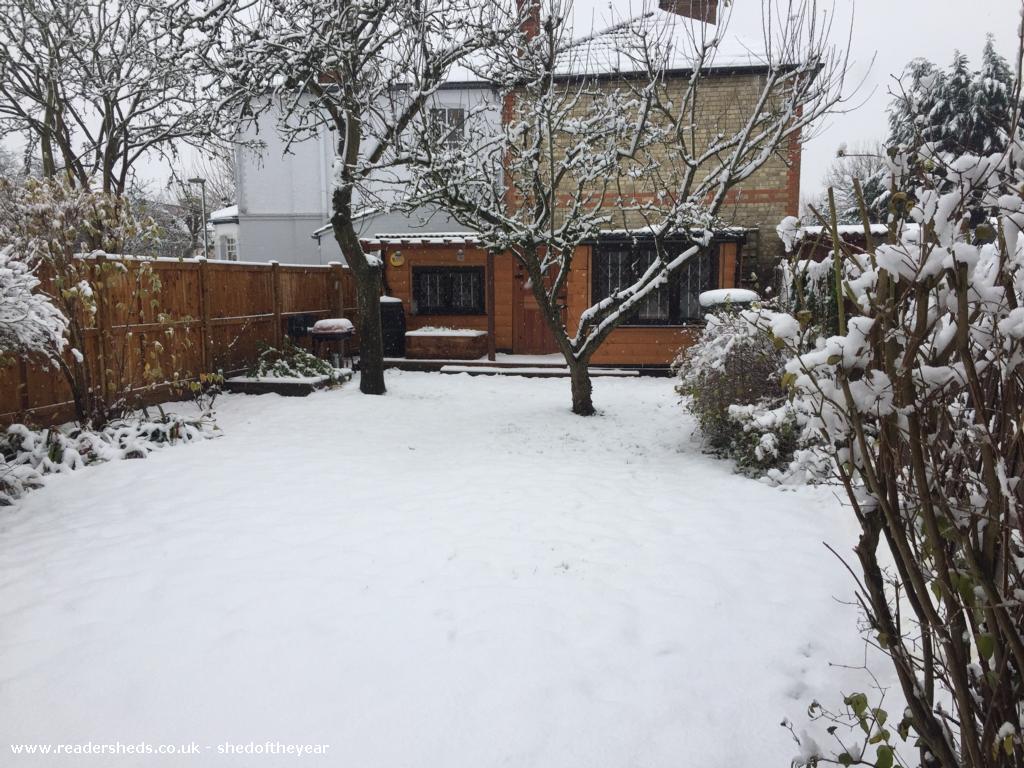 All photos are copyright of the sheddie Stephen Flood

The idea was to build a shed that felt like it had always been there, so it needed to feel a little bit old and a little bit wonky, hence the reclaimed heavy oak windows from a salvage yard and the corrugated roof. It is substantial and is of novel construction, built from machined tongue and groove sleepers stacked on edge and top bolted, making the walls solid 4" thick timber It was built single handedly with no real plan over a six month period in 2017.


This Shed has a Story behind it

So there was this period when I was spending a whole bunch of time at the office downstairs in the workshop doing stuff to Guitars (and amps and pedals and all those nice things and a second Hammond Organ was spread around in bits). Things finally came to a head when I came across this hulk of a Japanese Les Paul Guitar, no tuners, no bridge, no pickups, no nothing. It was basically a dog that needed rescuing. So I spent the week setting about salvaging this piece of junk, filing frets, T-cutting the body to try and revive it, and pulling in a bunch of cheap hardware to see if I could make it go, and paying no attention to business whatsoever as it all seemed quiet the guys were busy getting on with stuff. The Company turnover tripled that week.

By coincidence the fence in my back yard blew down (didn't take much) and my neighbors suggested that as they were getting the Landscapers in to remodel their Garden, a new fence, rather than my usual patch it job, might be a great idea. When they also said that they were demolishing their Garage down at the bottom, sensing a window of opportunity, I instantly agreed. This meant I could back a Concrete Truck straight into the back of my Garden to pour the foundations for a Shed. It would also keep me out of the office and allow the rest of the guys to operate totally unhindered by any management decisions coming from me, we'd make loads of money.

Now this wasn't to be just any Shed, it was going to be Byrdland, The Left Handed Guitar Shed. I had been following the sale progress of this Left handed Gibson Byrdland Guitar. As rare as hens teeth - 32 glossy photos and a price tag to match, it was in the US and the pound had gone into the dumper so it was getting more expensive by the day, and the price was just obscene, but business was good and the credit card company just kept upping that limit. If i was smart I should have bought that guitar, or if i was even smarter, I should have chosen the shed from a Catalog and had the man deliver it and build it - job done in two days. Not me. So I single handedly set about building a 150 sq ft fully insulated building on an 8" reinforced concrete base out of 8x4 inch two meter long railway sleepers, about 100 of them. About six months later, late for work every day, it was complete and Byrdlands with an S was born having cost me twice what that Guitar ultimately went for. Now I was ready to scale up as the madness of what was to ultimately become the Quest to build the Ultimate Left Handed Telecaster

Details of the quest can be found at www.iknockedupthistele.com