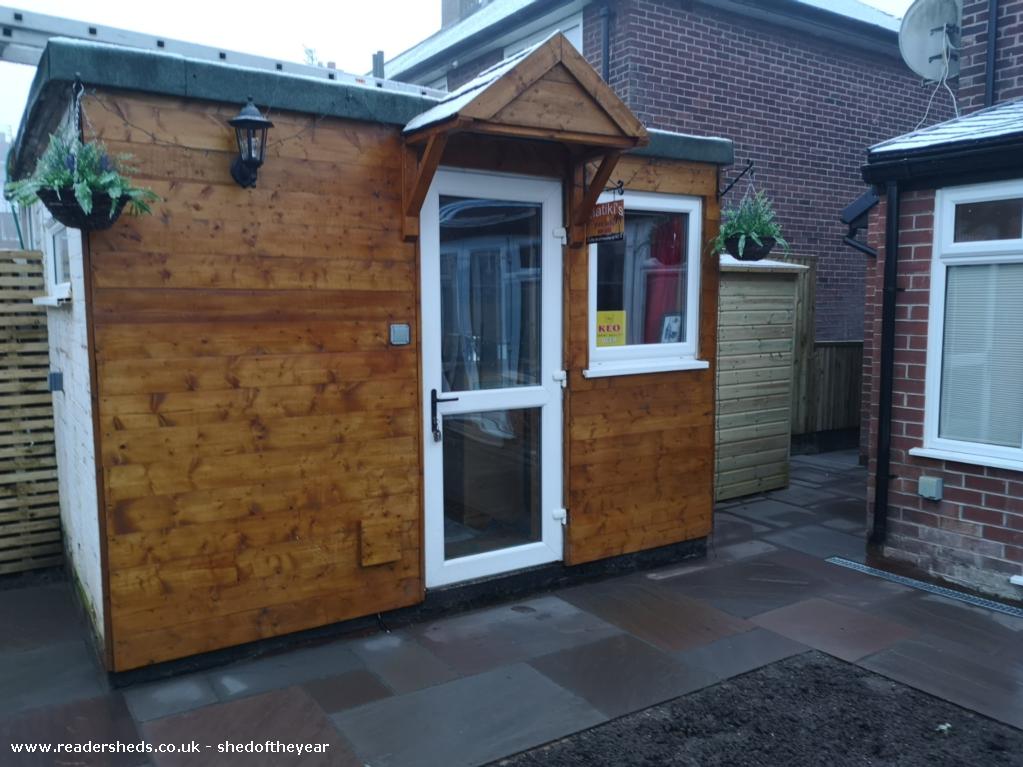 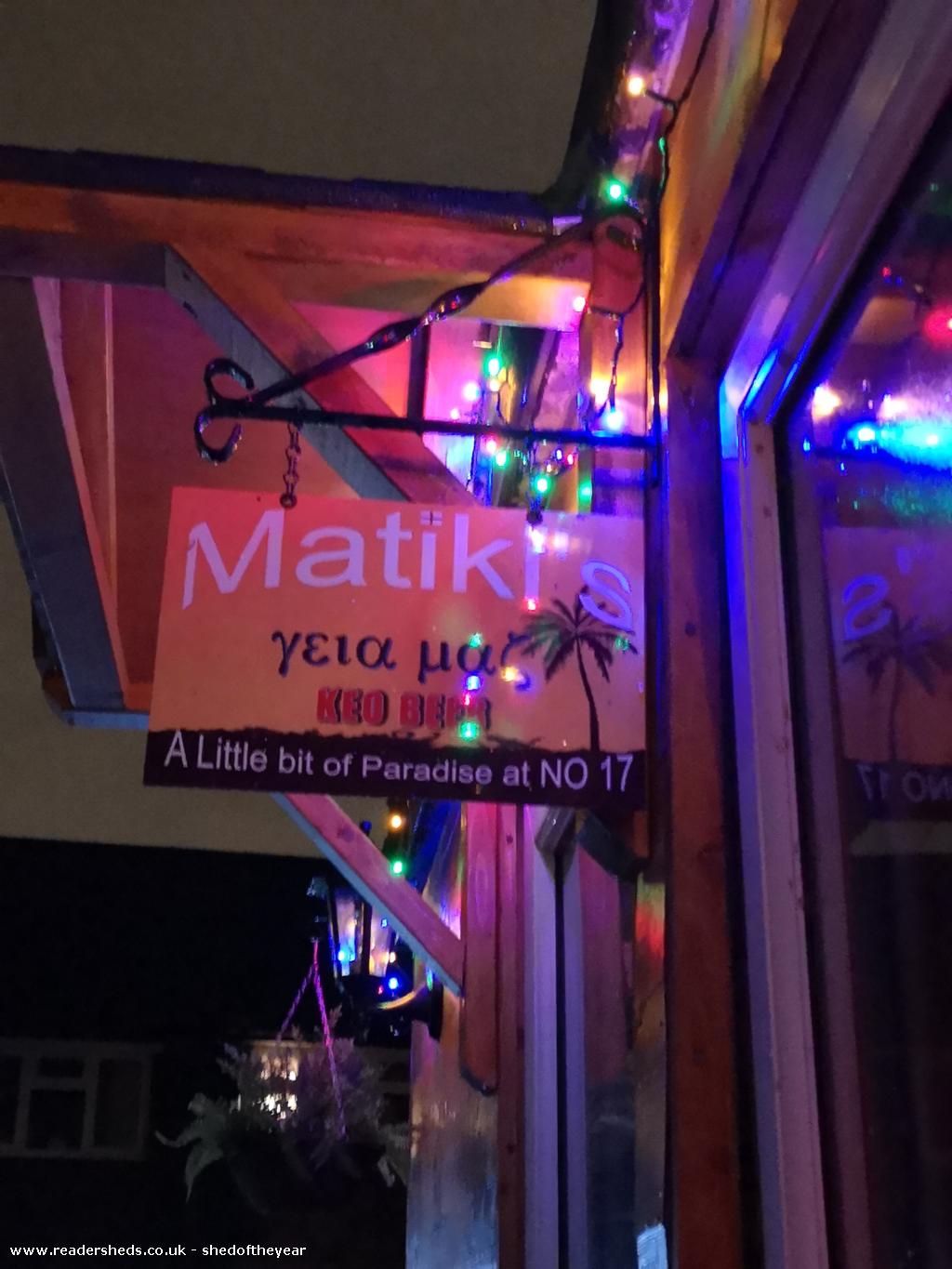 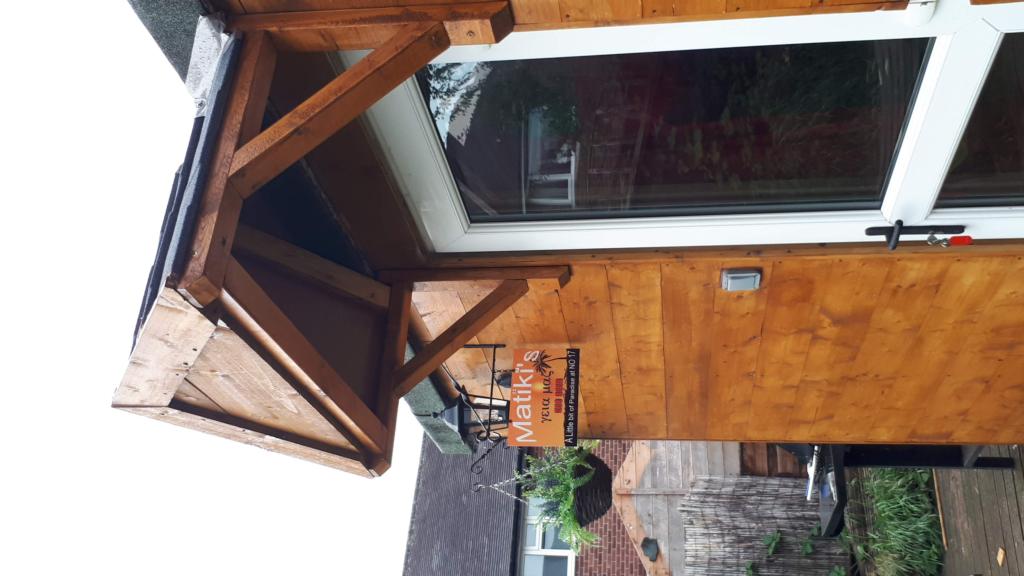 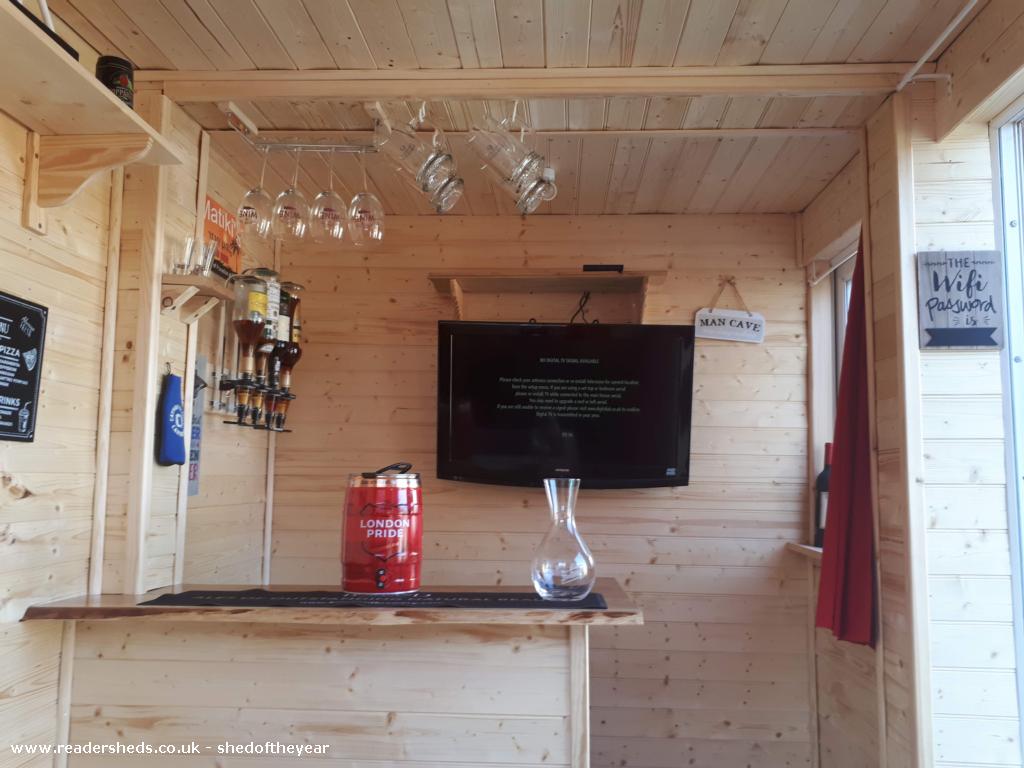 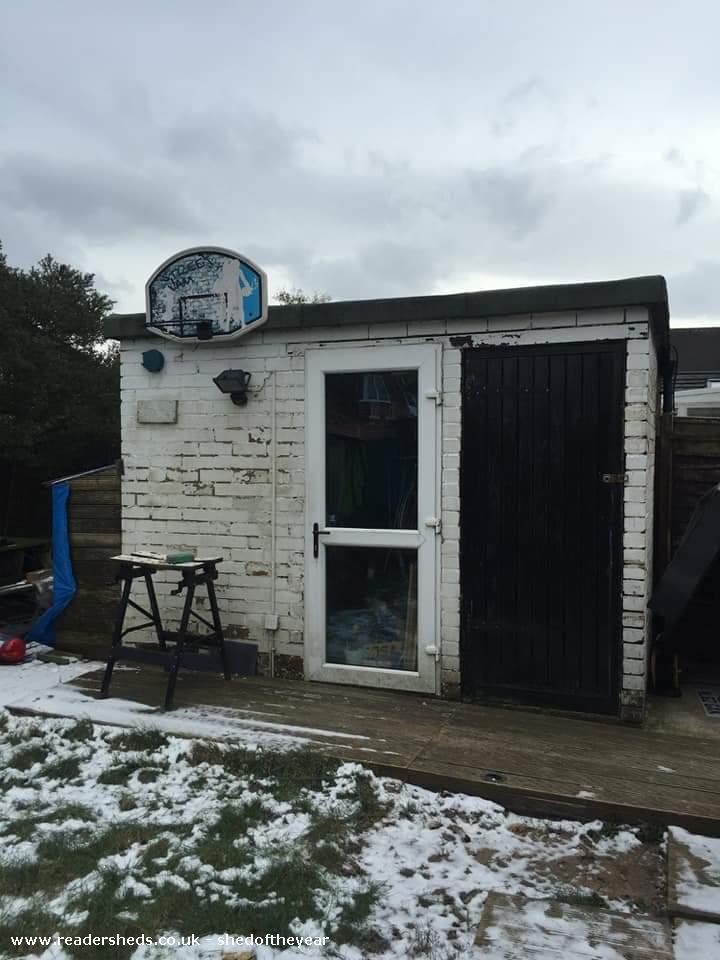 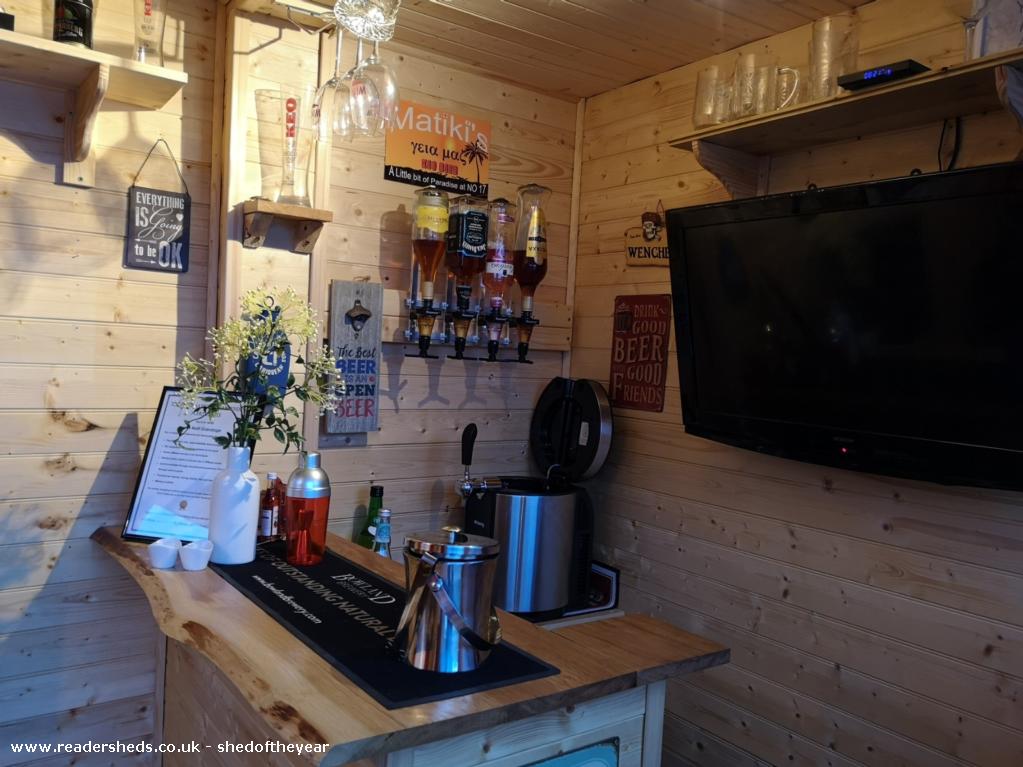 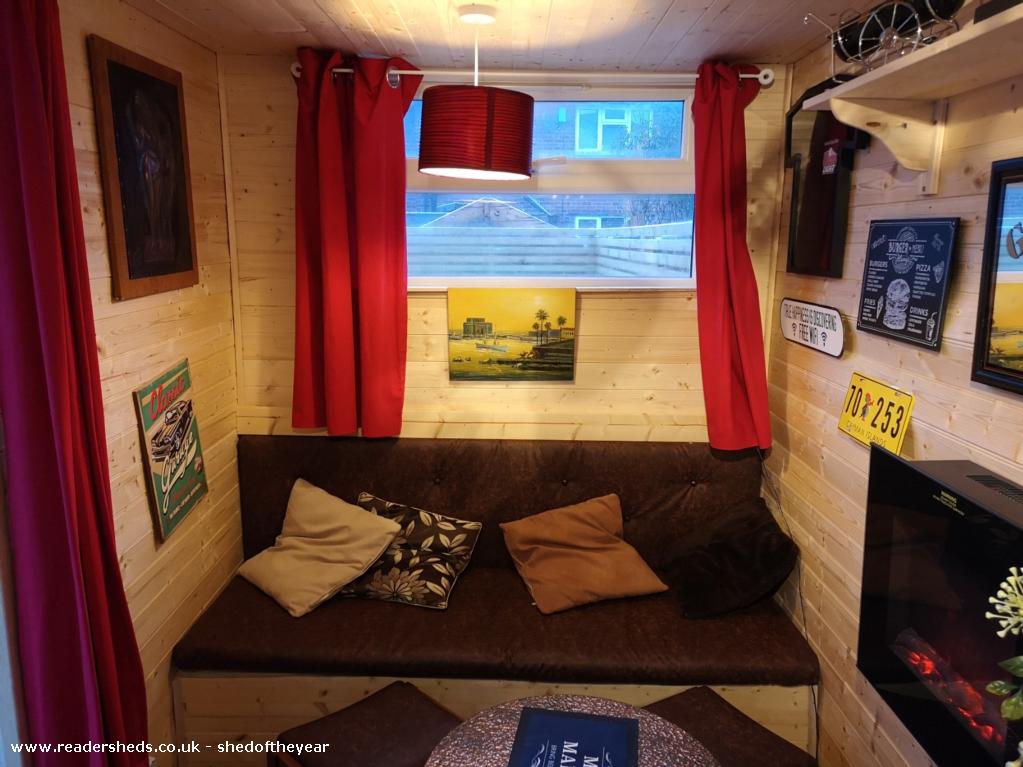 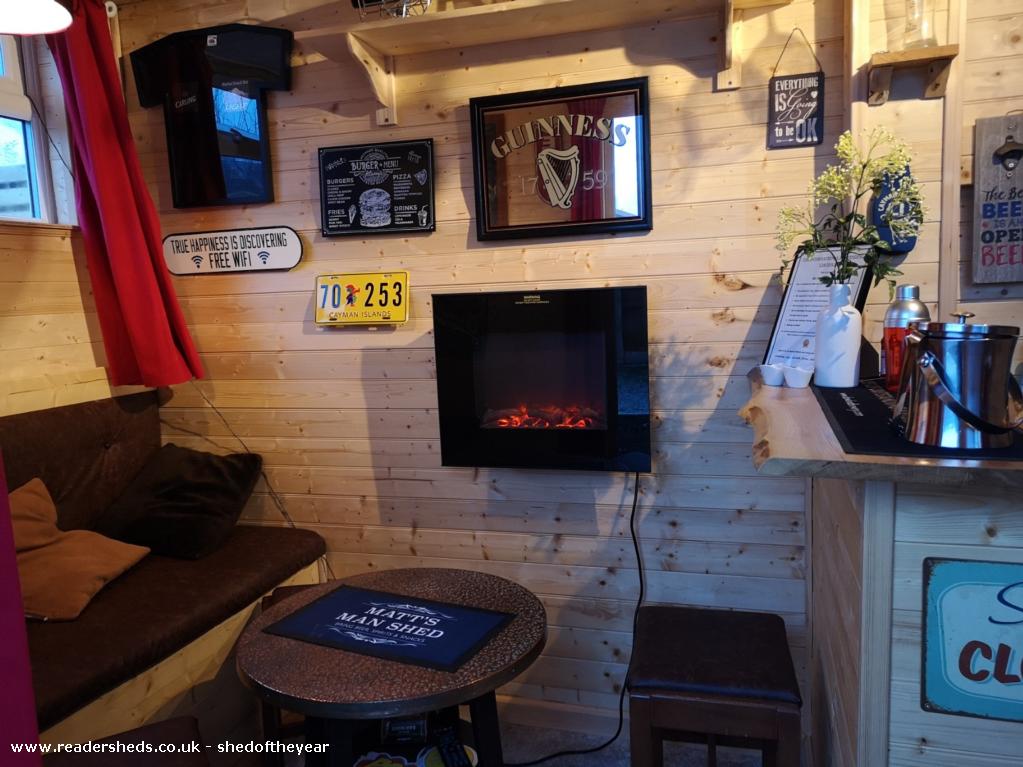 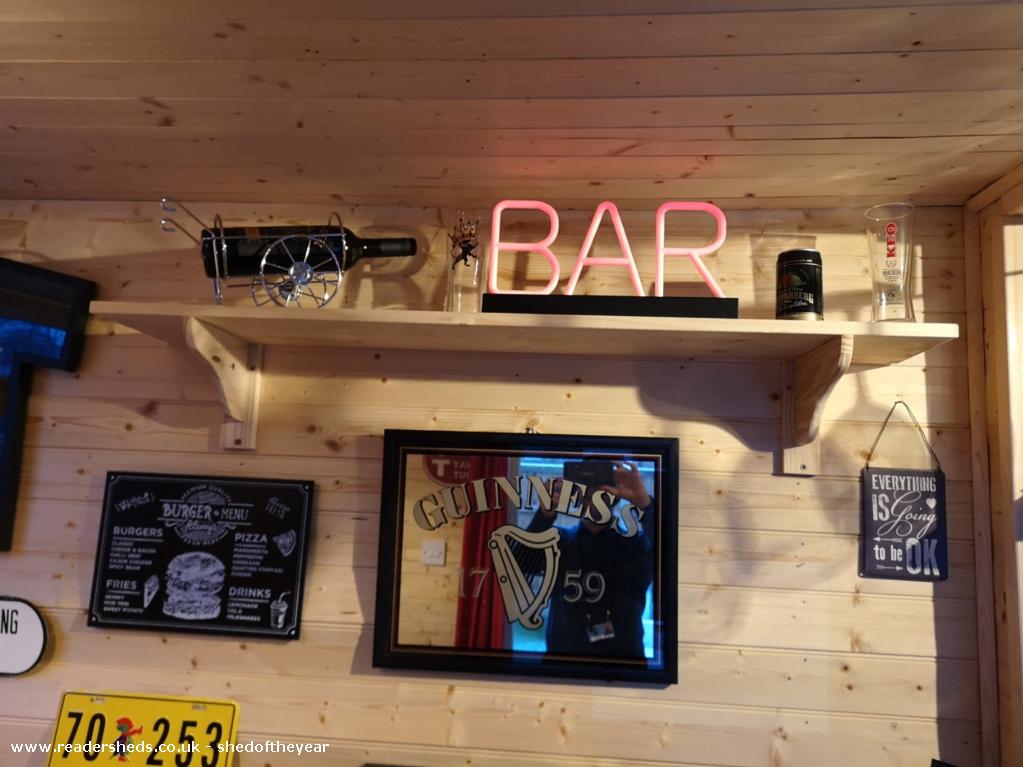 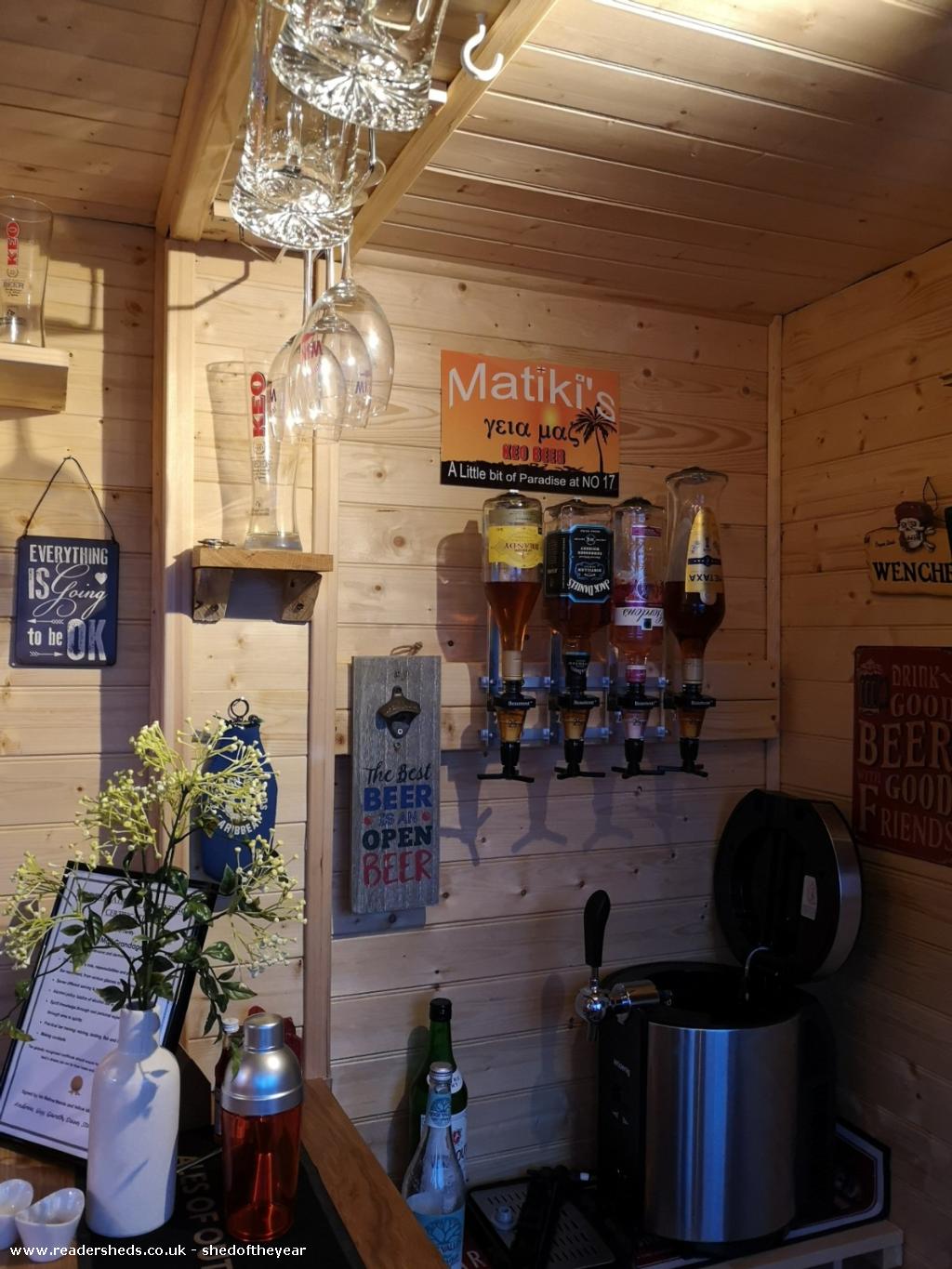 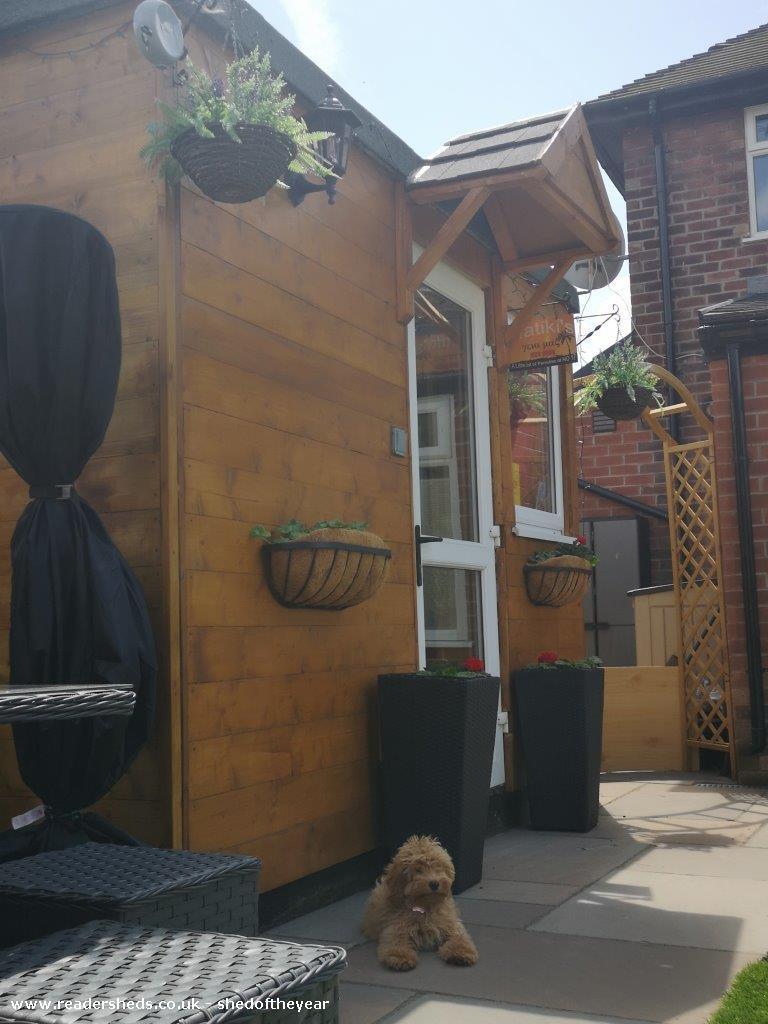 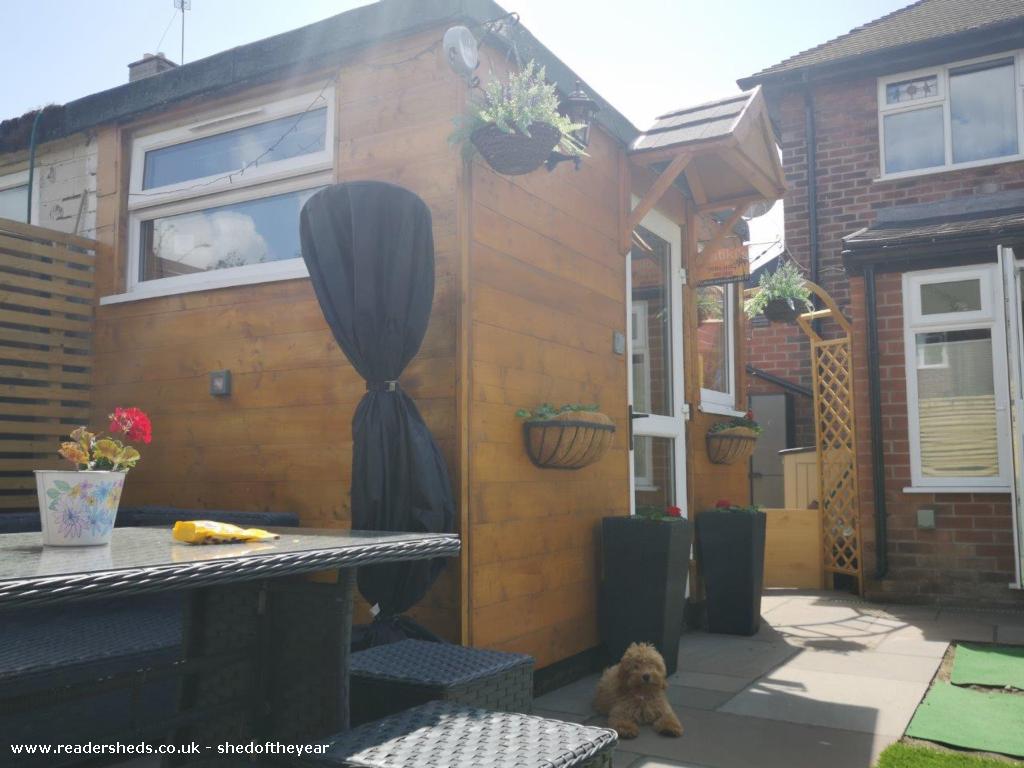 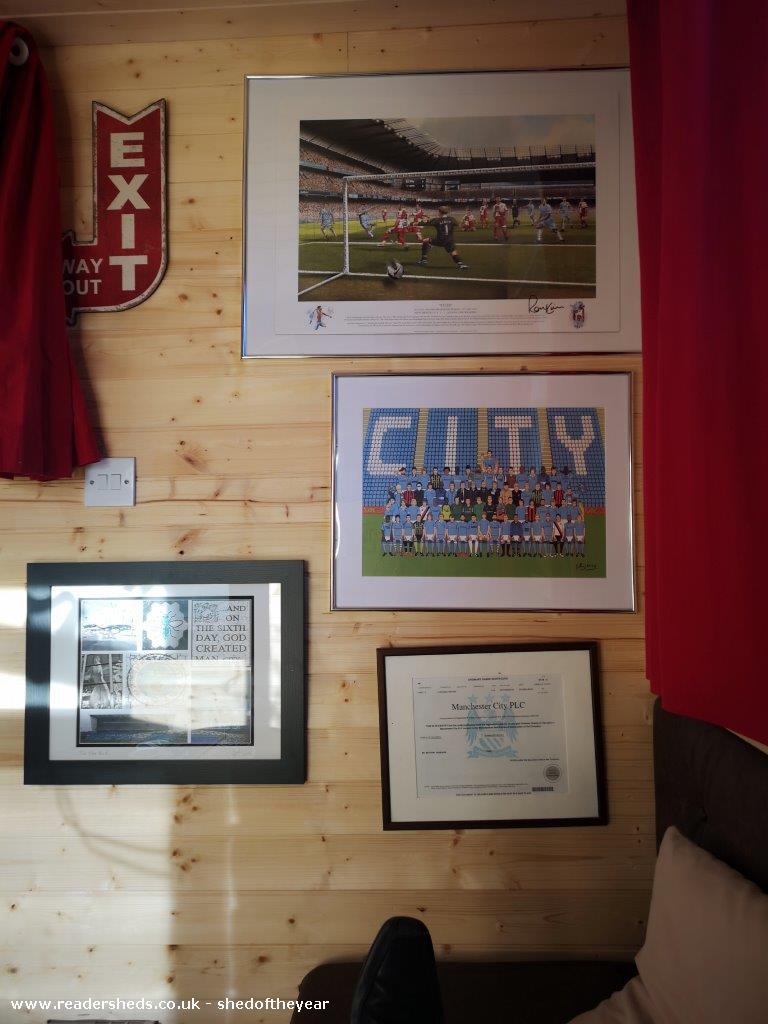 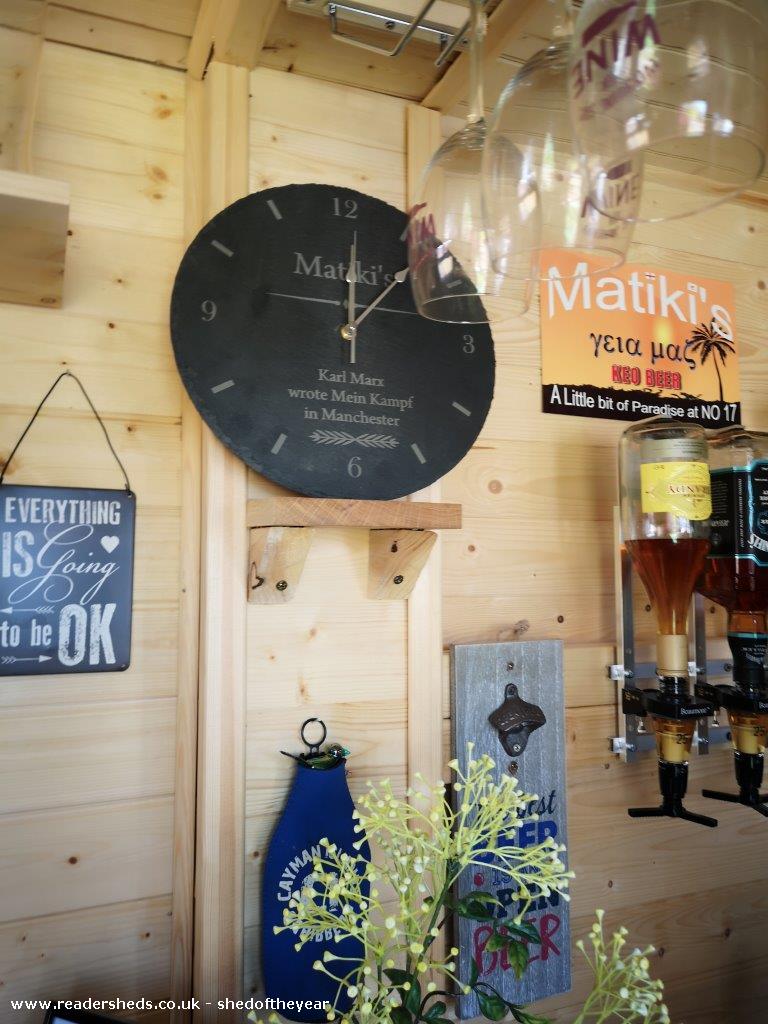 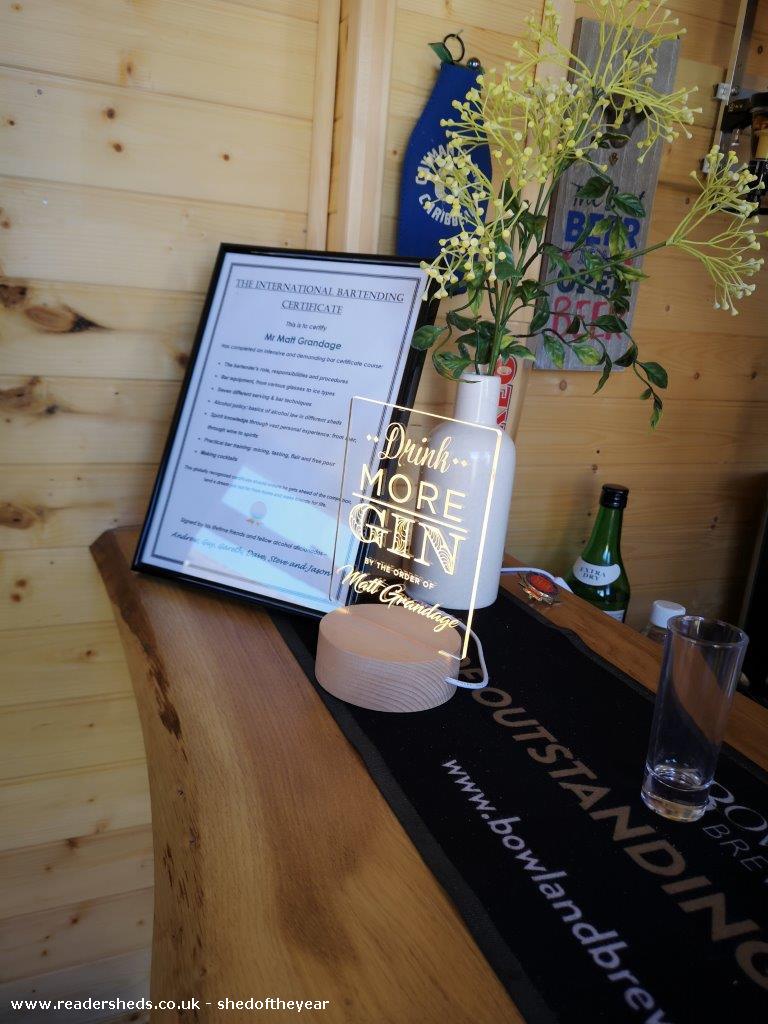 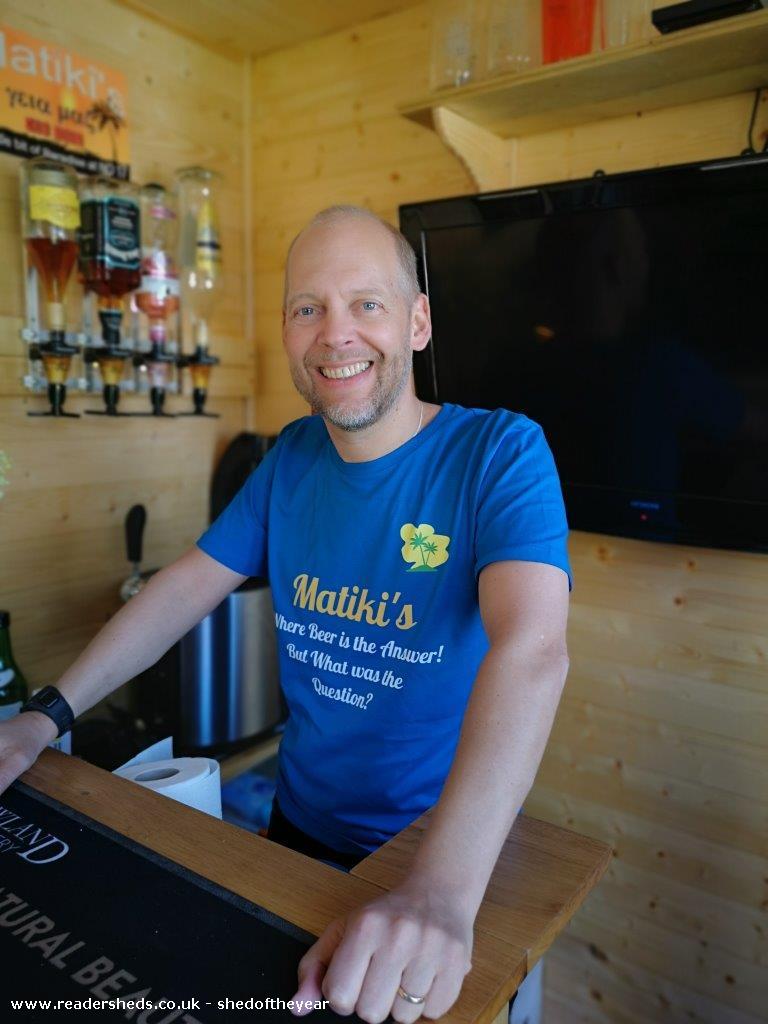 All photos are copyright of the sheddie Matt Grandage

The transformation from brick outhouse to swanky traditional micro pub. Approximately 6 meters square and fits about 7 people comfortably. Includes network connected TV and Sports channels. Up cycled traditional bar stools (x5) and table (x1) sourced through eBay. Re upholstered all seats too. Bar top made from a waney edge piece of oak sourced from a local timber yard, mini fridge stored under the bar, optics and 5 Litre keg dispenser. There is also storage under the bench for tools. Our neighbours kindly donated the carpet and behind the bar is laminated wood

February 2018 we looked into have the garden landscaped and were hoping the work would start in June/July however due to unforeseen circumstances the landscapers were unable to start until December. We don't have a large garden but i had wanted to build a shed, insulate it and turn it into a bar / man cave. However the only place to put it was the one spot the sun got the most and Mrs G wasn't too pleased. So i started to look into other options and worked out that i could possibly convert the two small chambers in the brick outhouse into one. My wife thought i was mad and as the garden landscaping was delayed, I suddenly had a project on my hands. I hired a skip and brick cutter at the beginning of May and off i went. No written plans just the ones in my head. I knocked the central wall between the two chambers and inserted a concrete support. Checked what misfit UPV Windows the local merchant had, nearest to the dimensions required, bricked up half the door way. Installed the windows and that was the structure sealed. The roof btw is solid concrete and the walls single bricks. I already had electrics to the shed prior to the project and just extended the circuit to include an extra set of lights and plugs. Insulation was sourced on eBay, luckily someone was removing the insulation from their garage so got plenty to insulate the interior. I worked on the shed every night and weekend. Coming home with a car full of timber and cladding most days as I hadn't worked out exactly how much I needed. By the first week of July it was all but finished and so we had the opening ceremony inviting our neighbours, as it was them that had to live with continuous sawing and hammering every night. Since then we had had many fun nights with guests bringing items to hang on the walls... PS the name comes from the first three letters of my name Matt and the last three of my wife's Kiki - Hence Matiki's