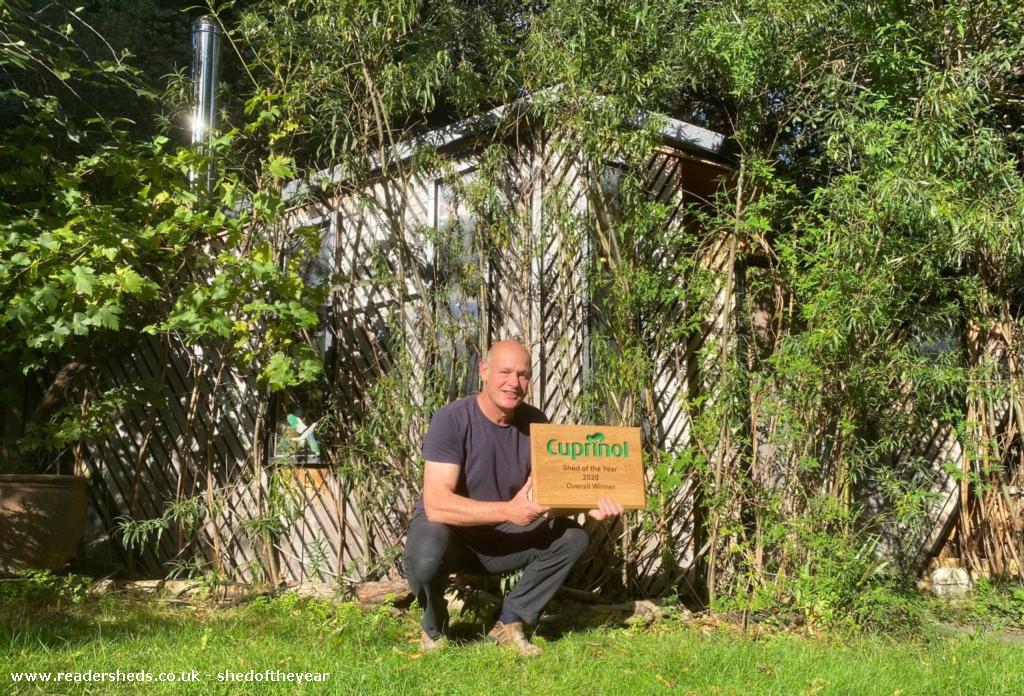 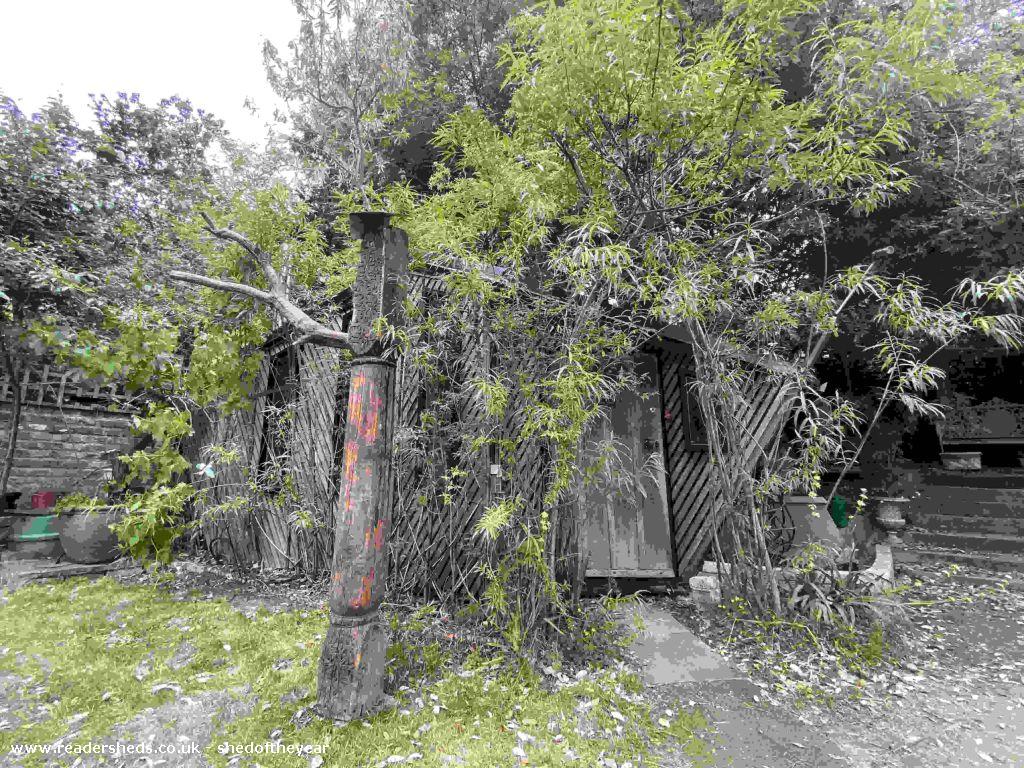 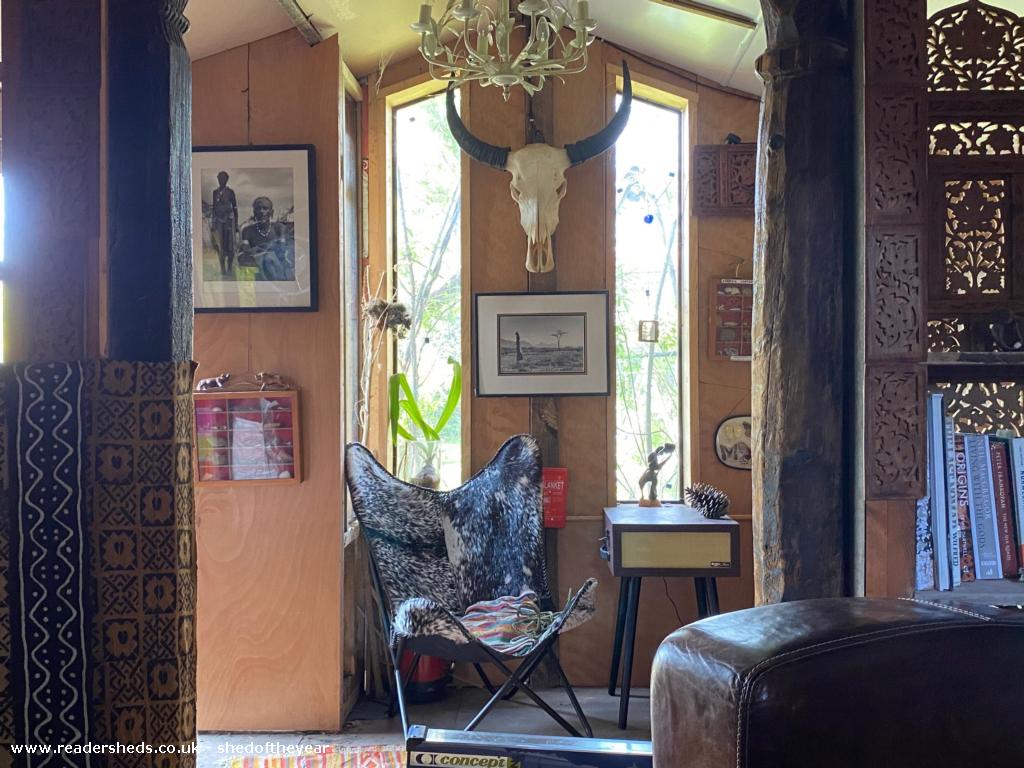 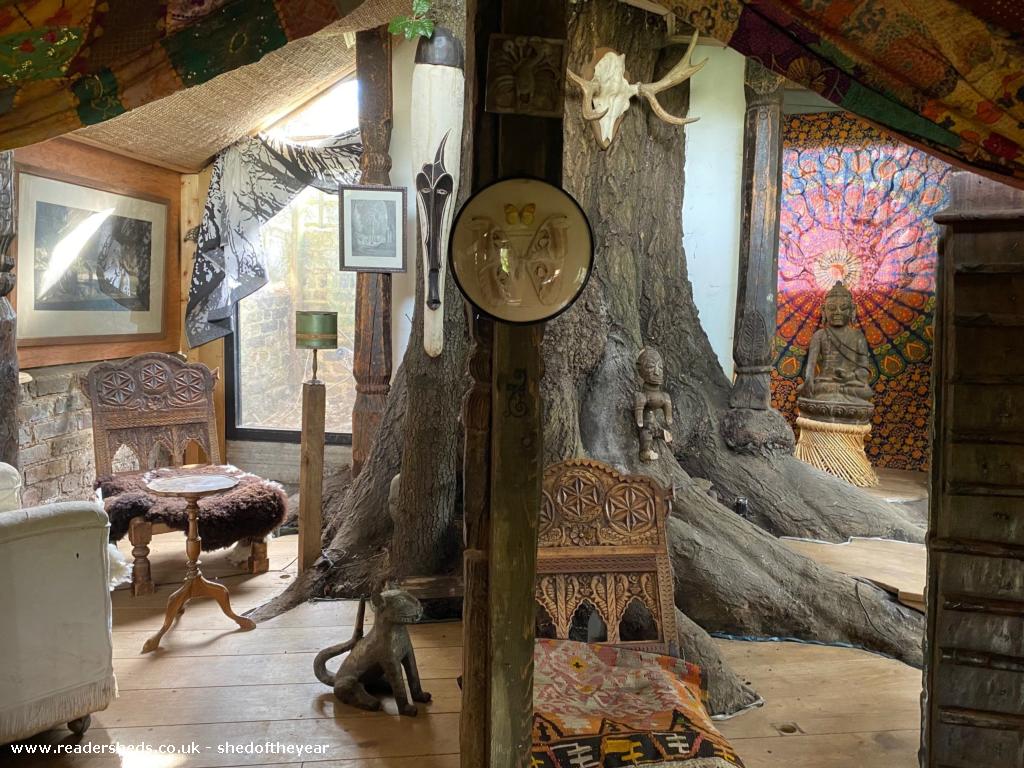 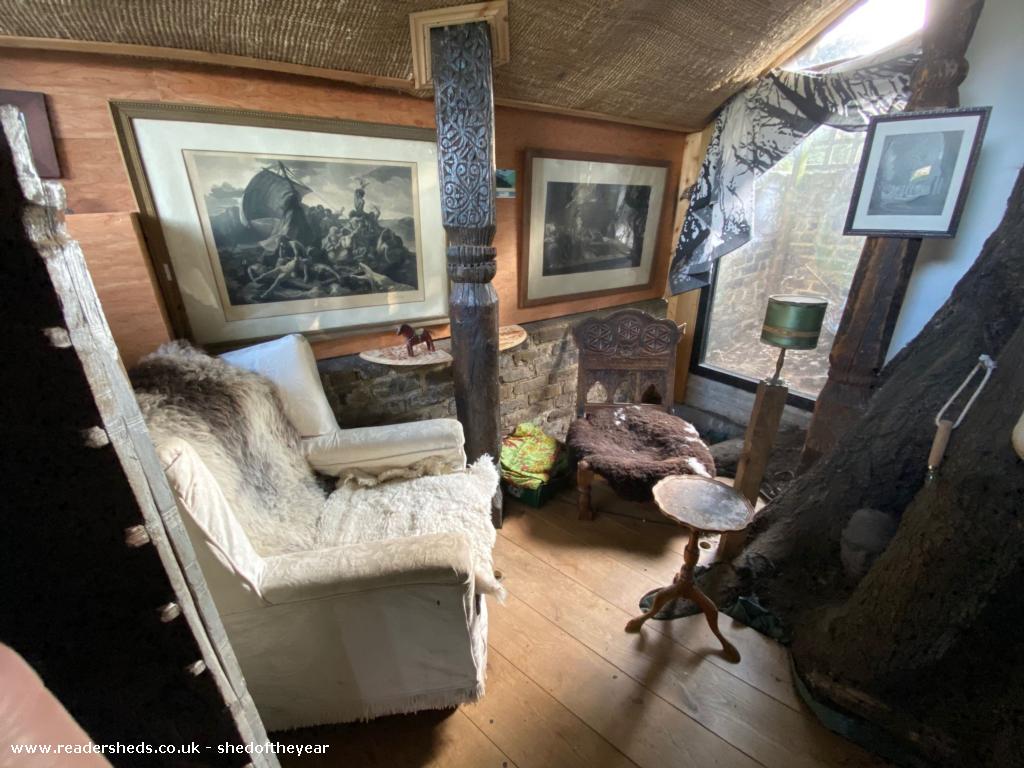 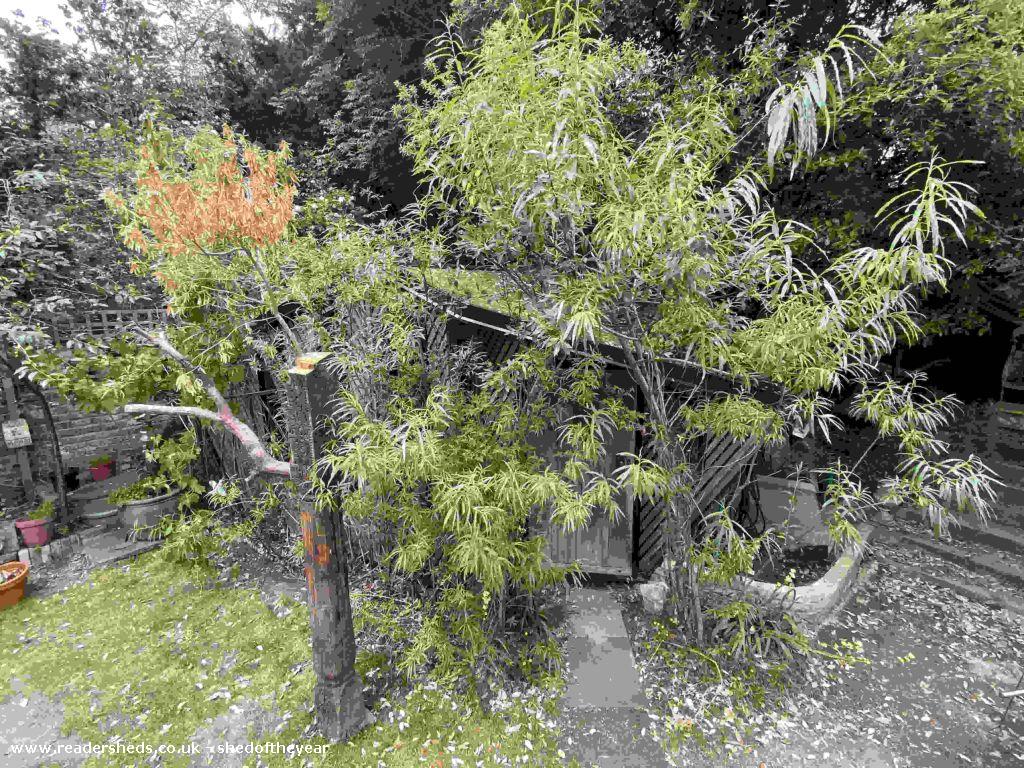 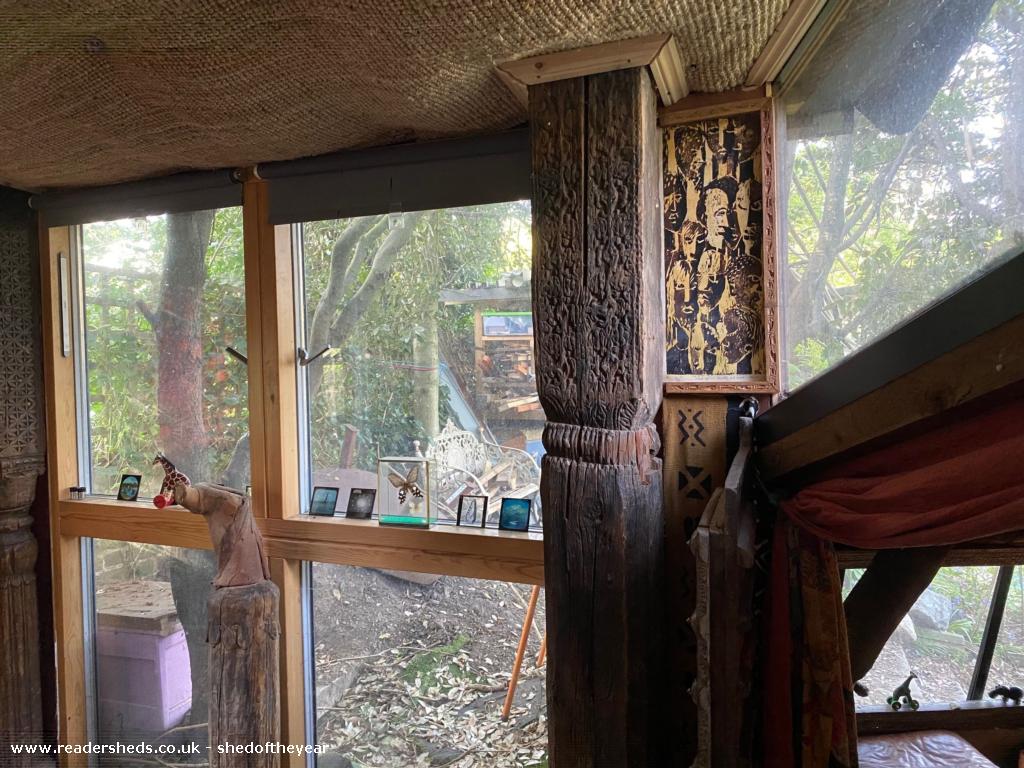 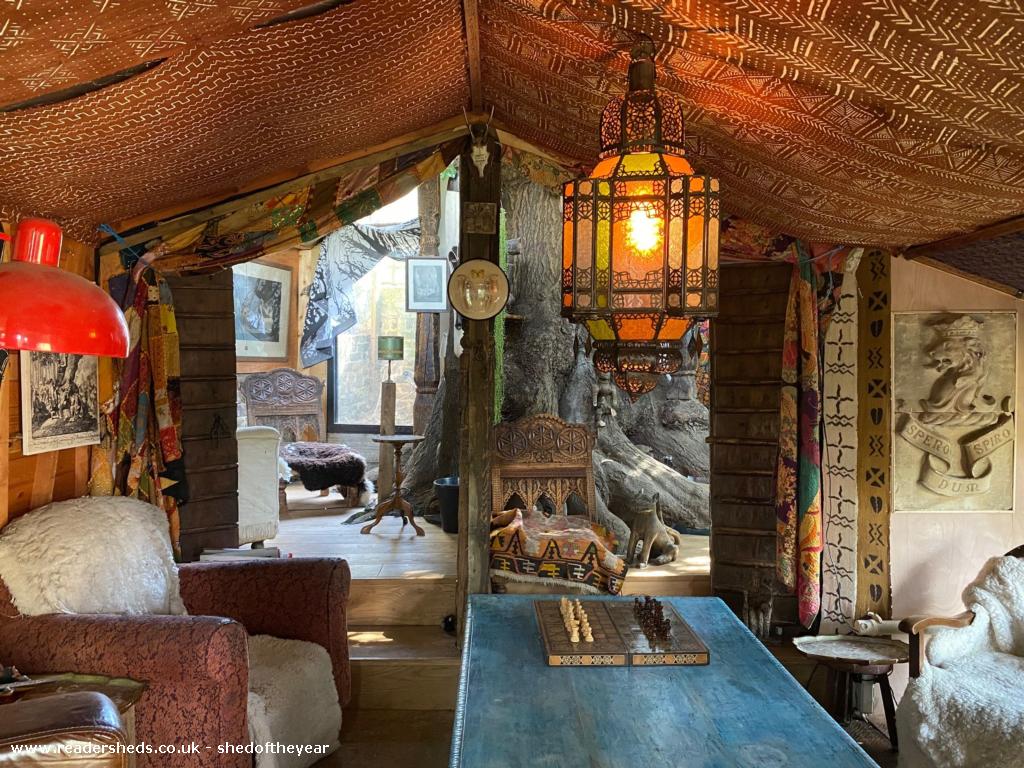 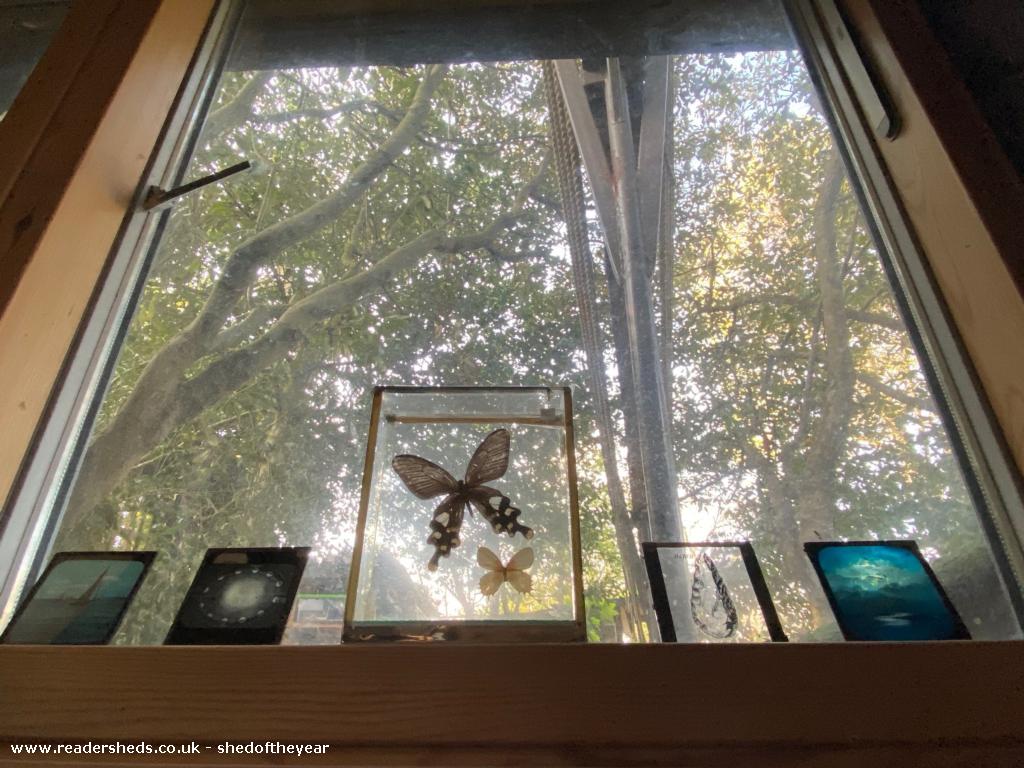 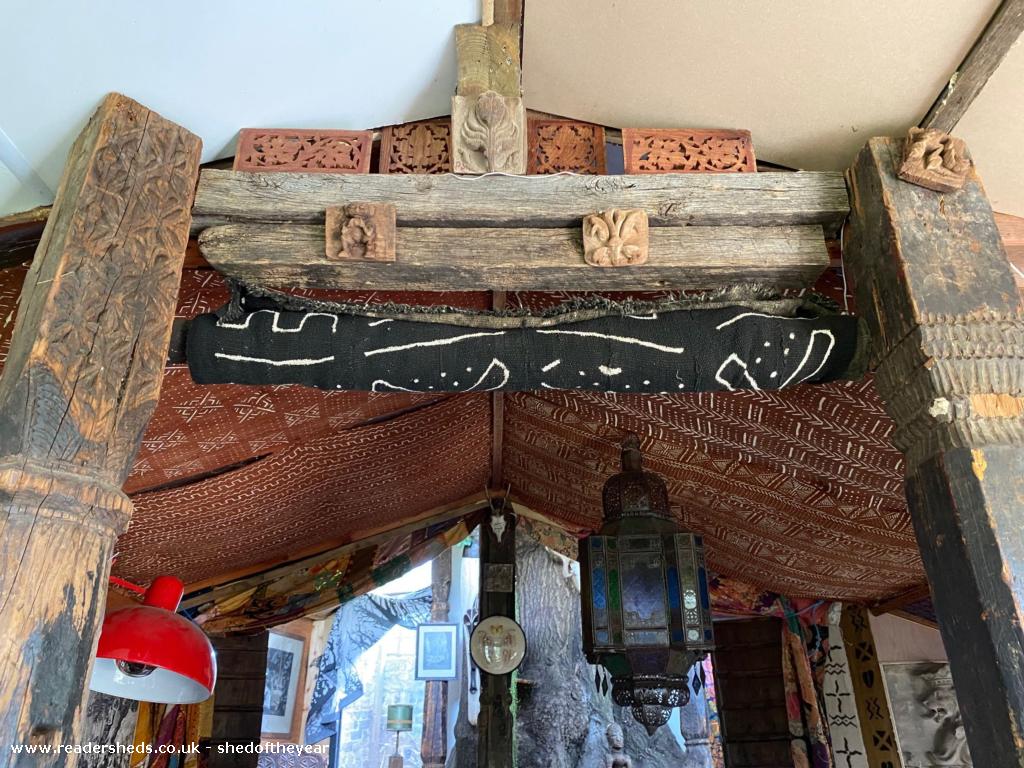 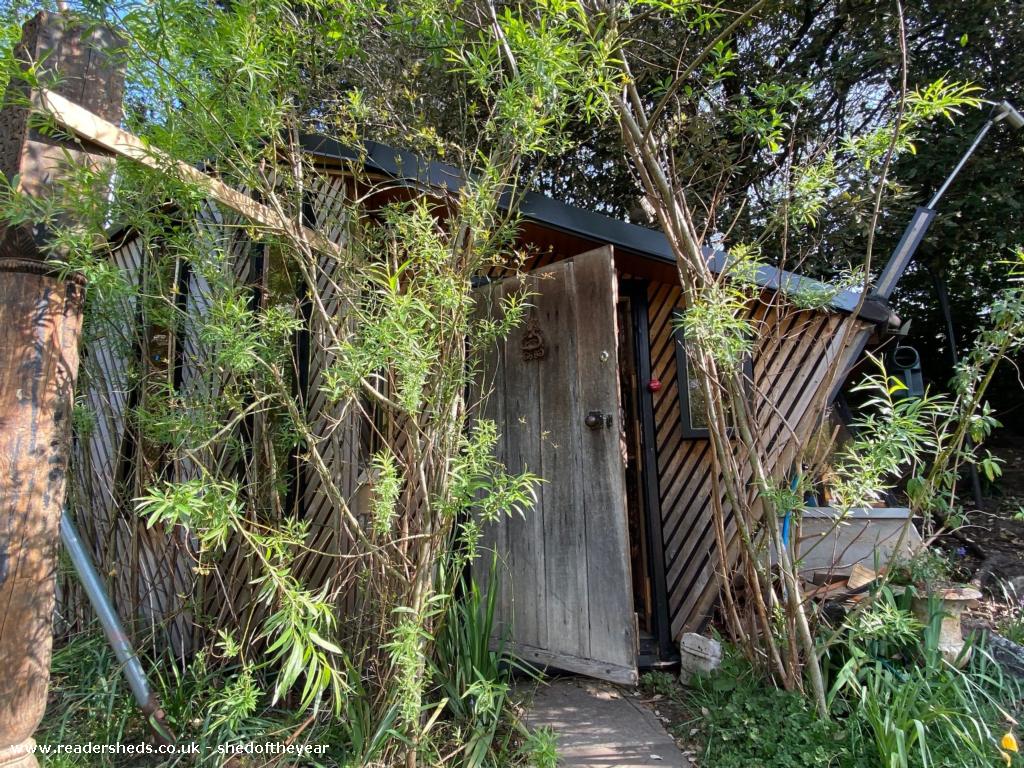 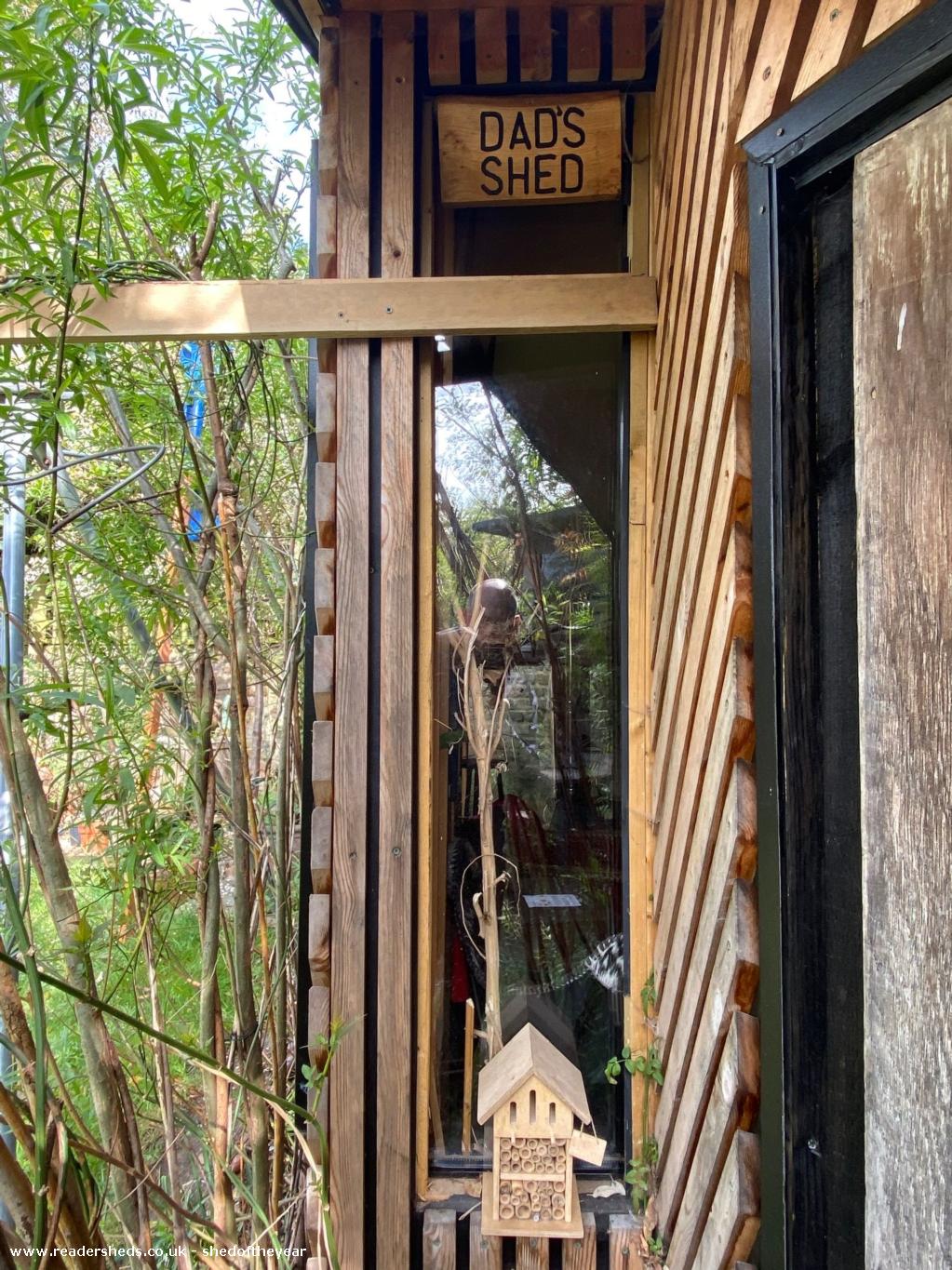 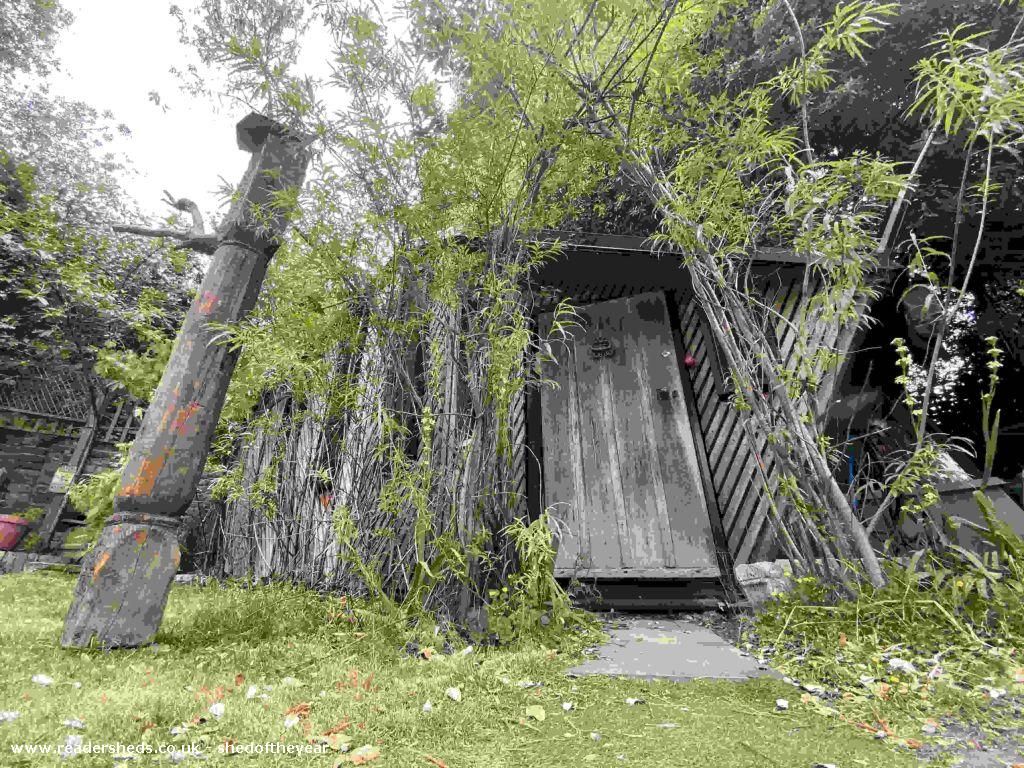 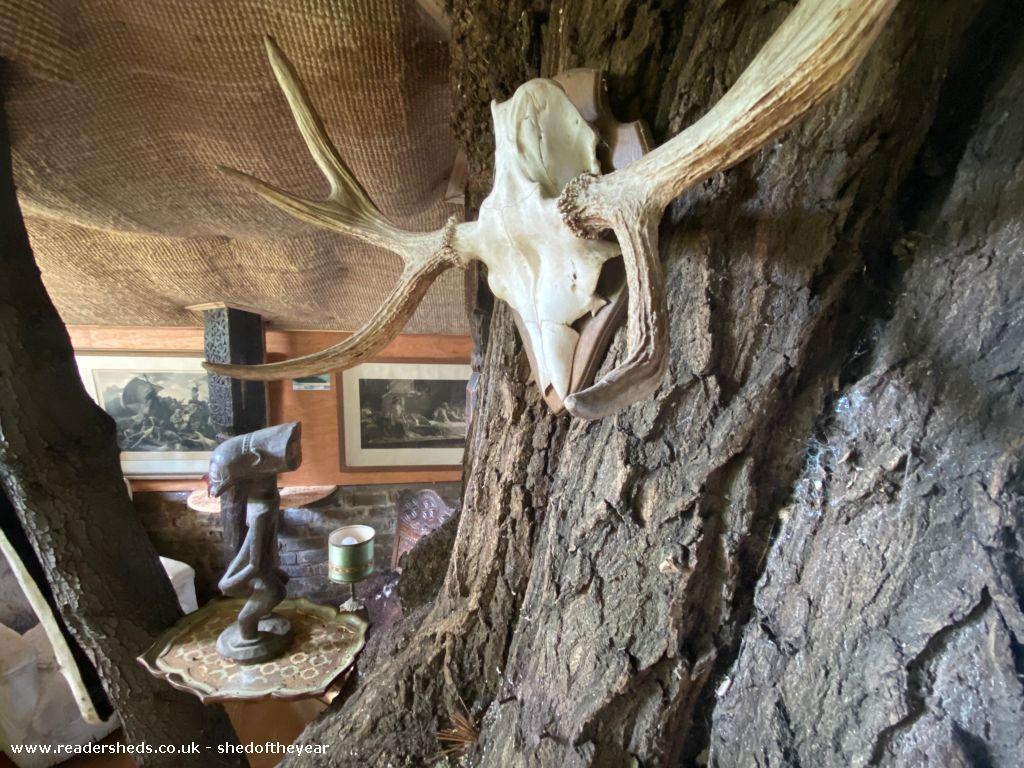 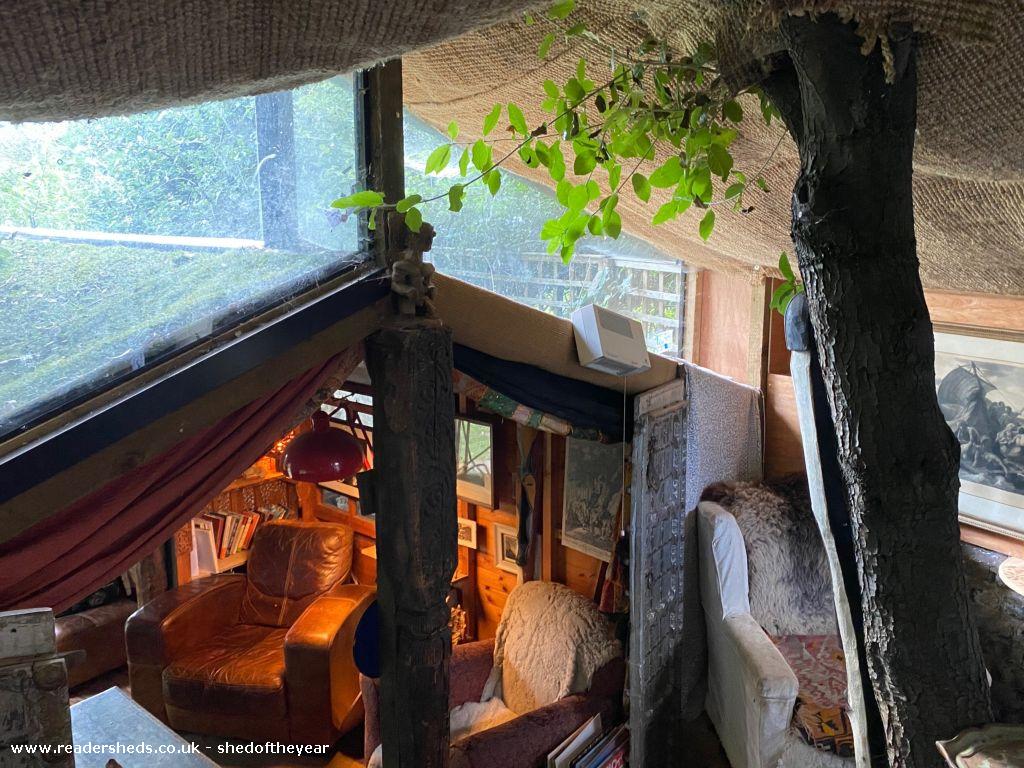 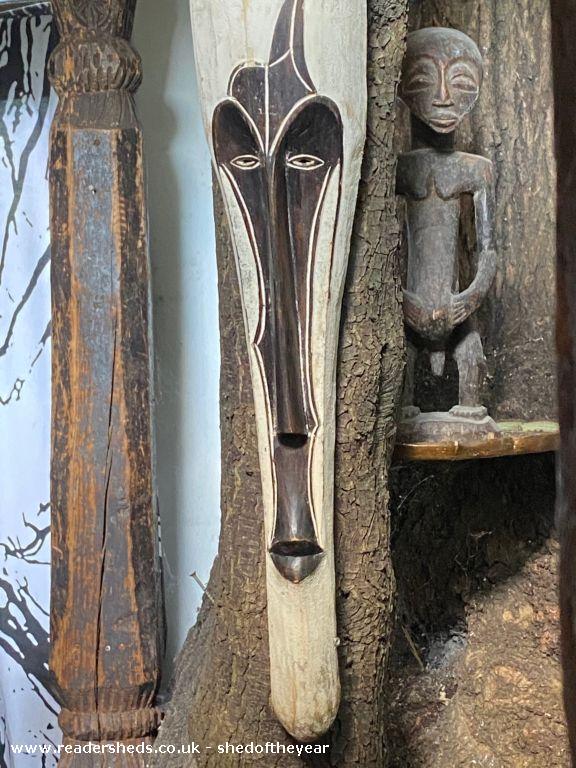 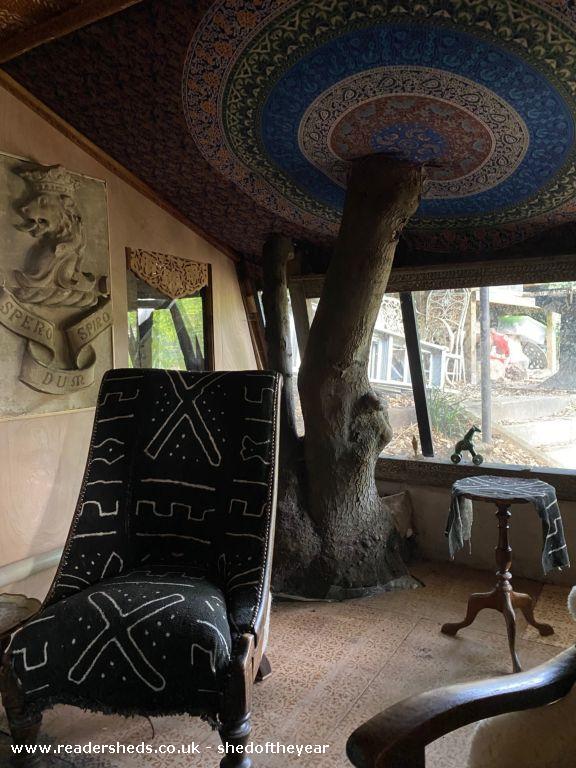 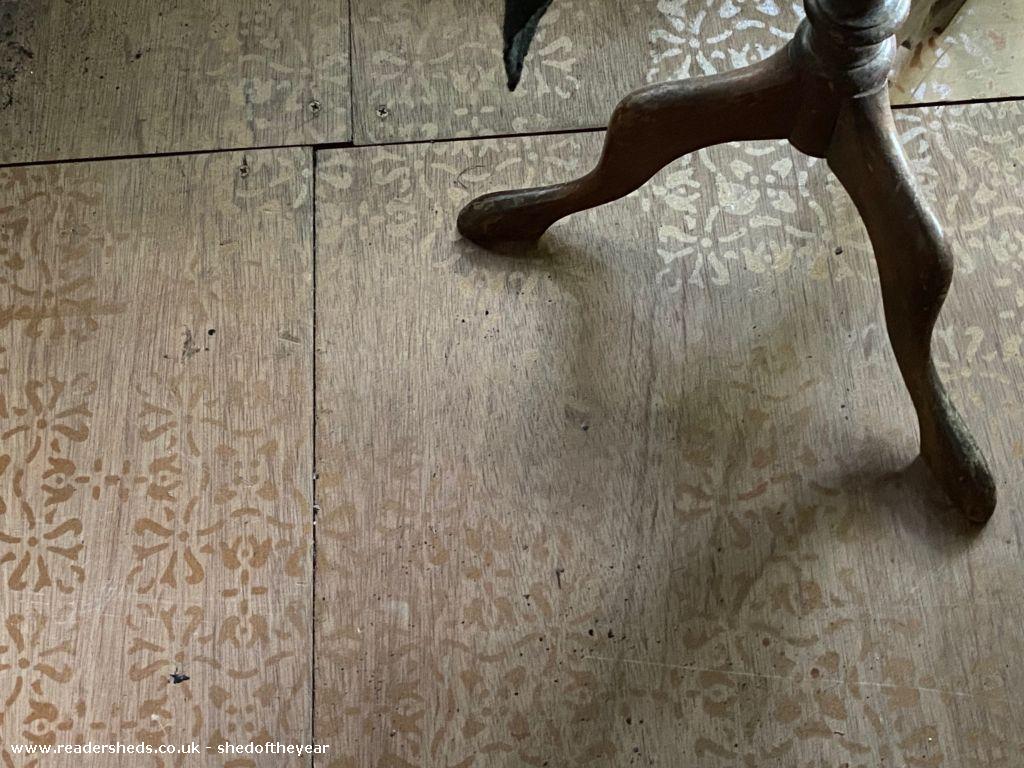 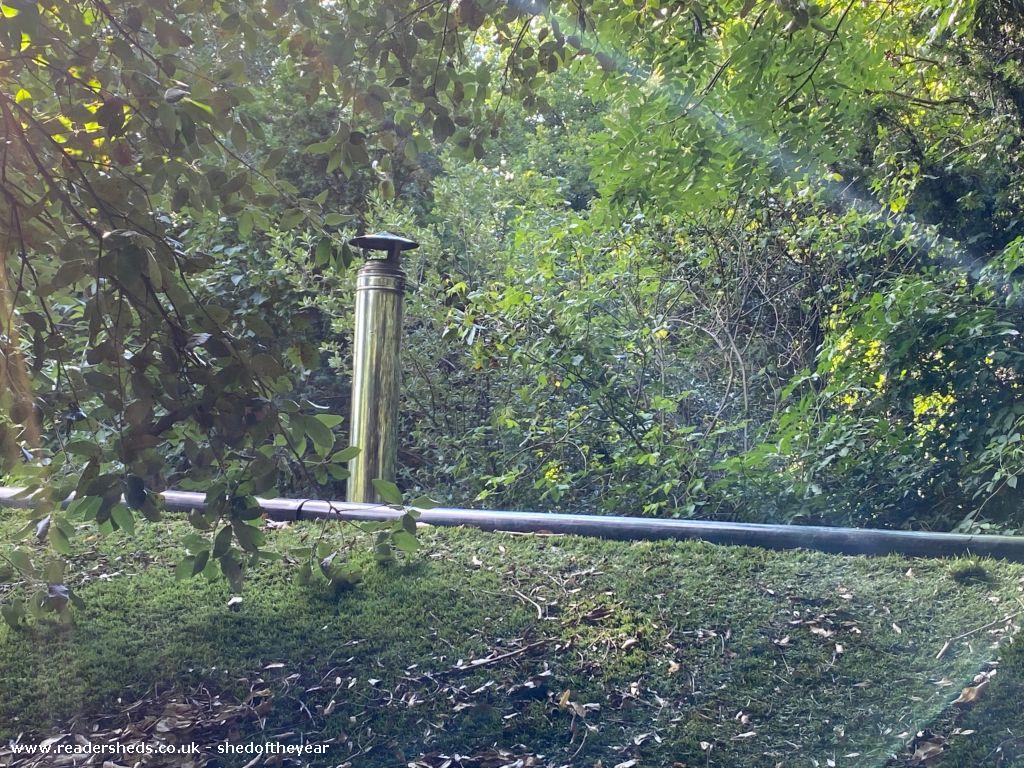 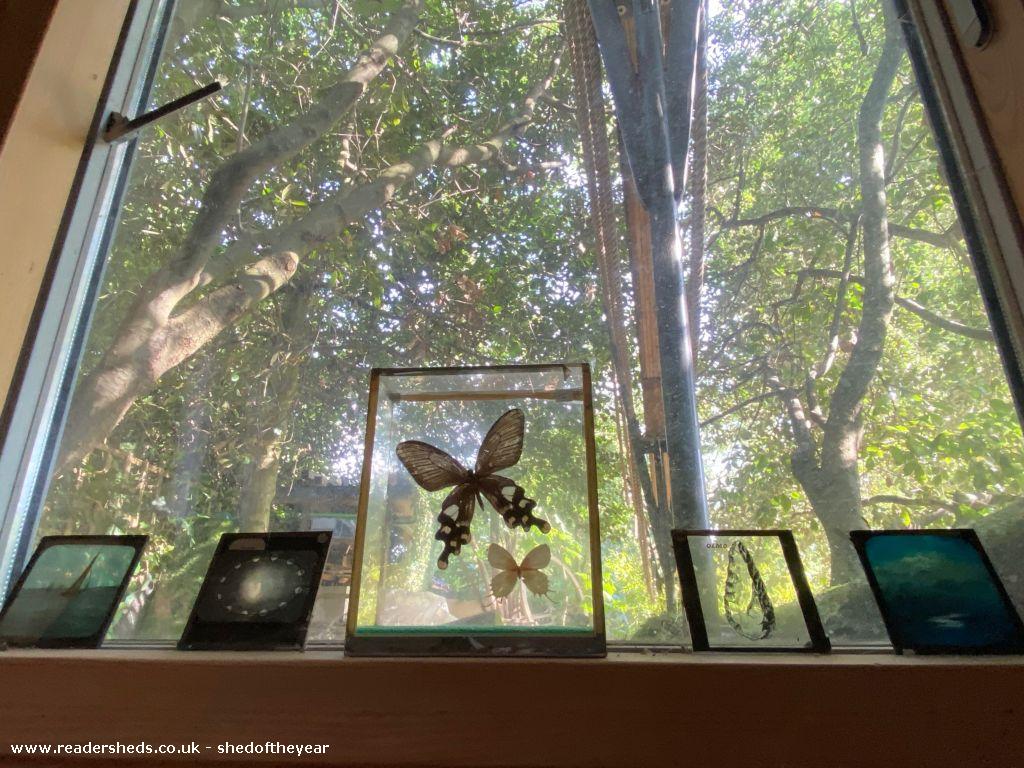 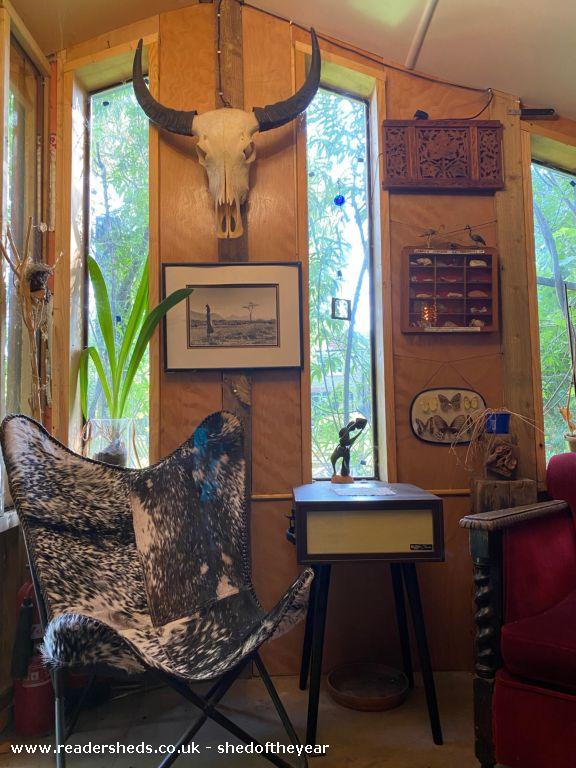 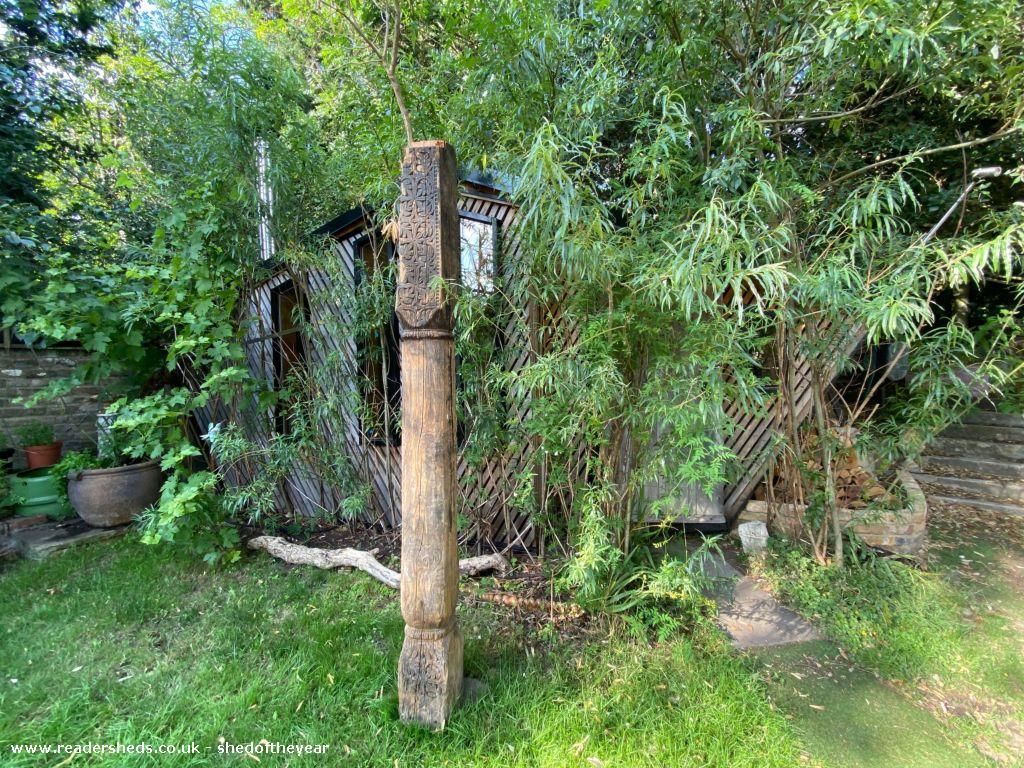 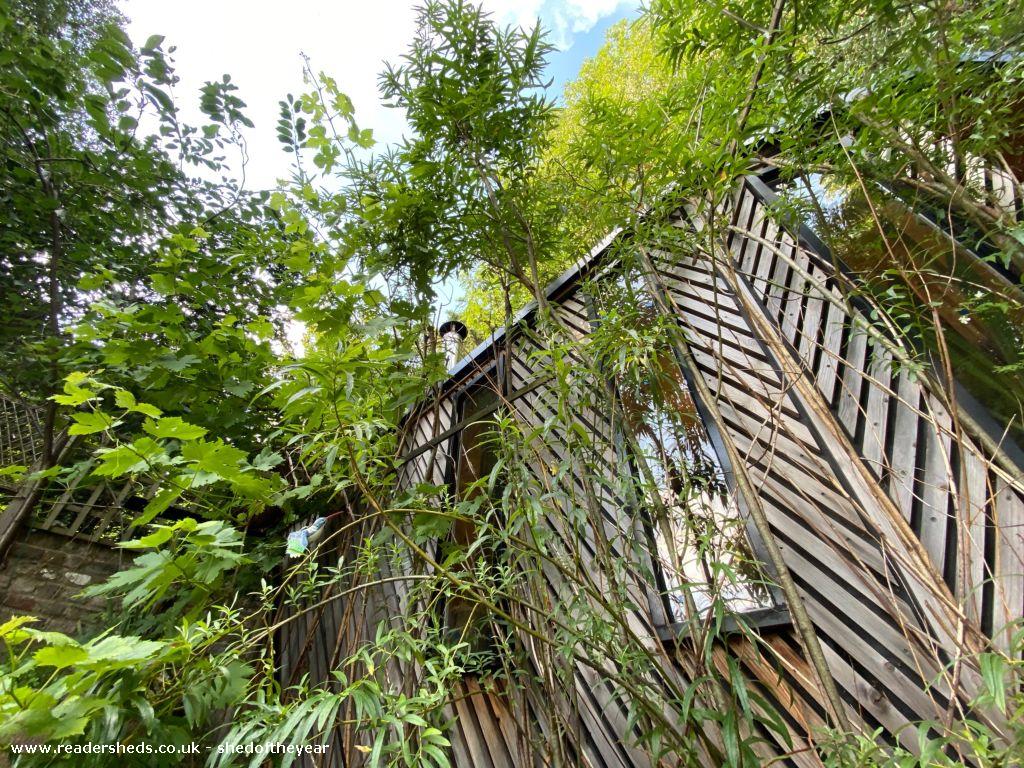 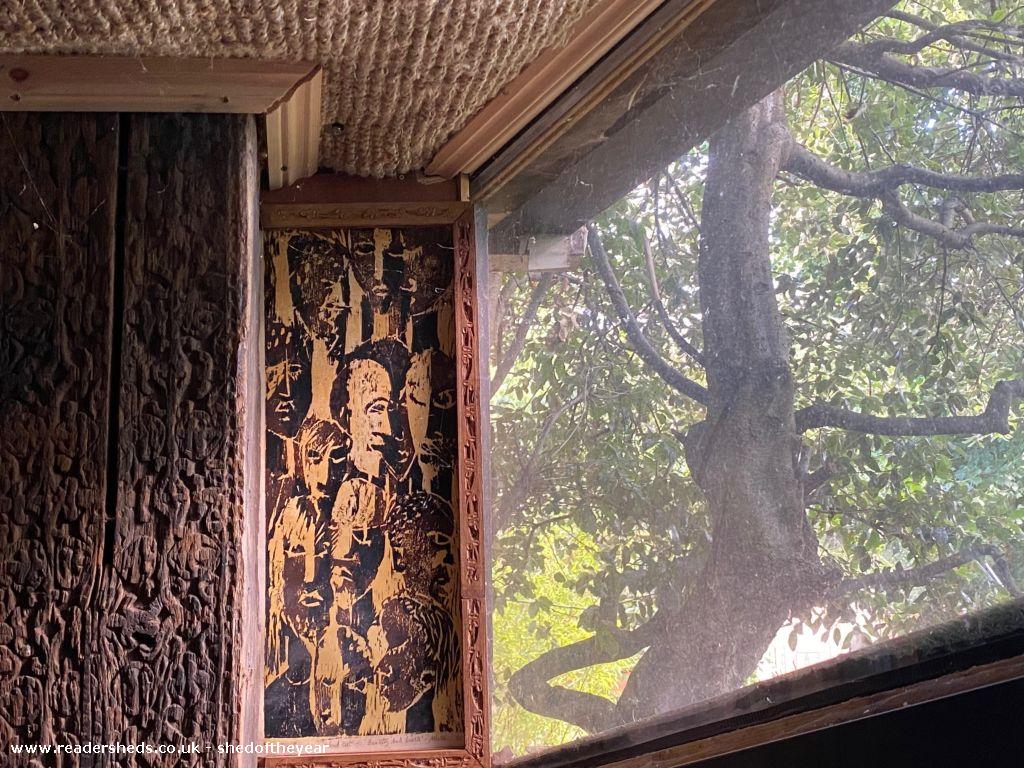 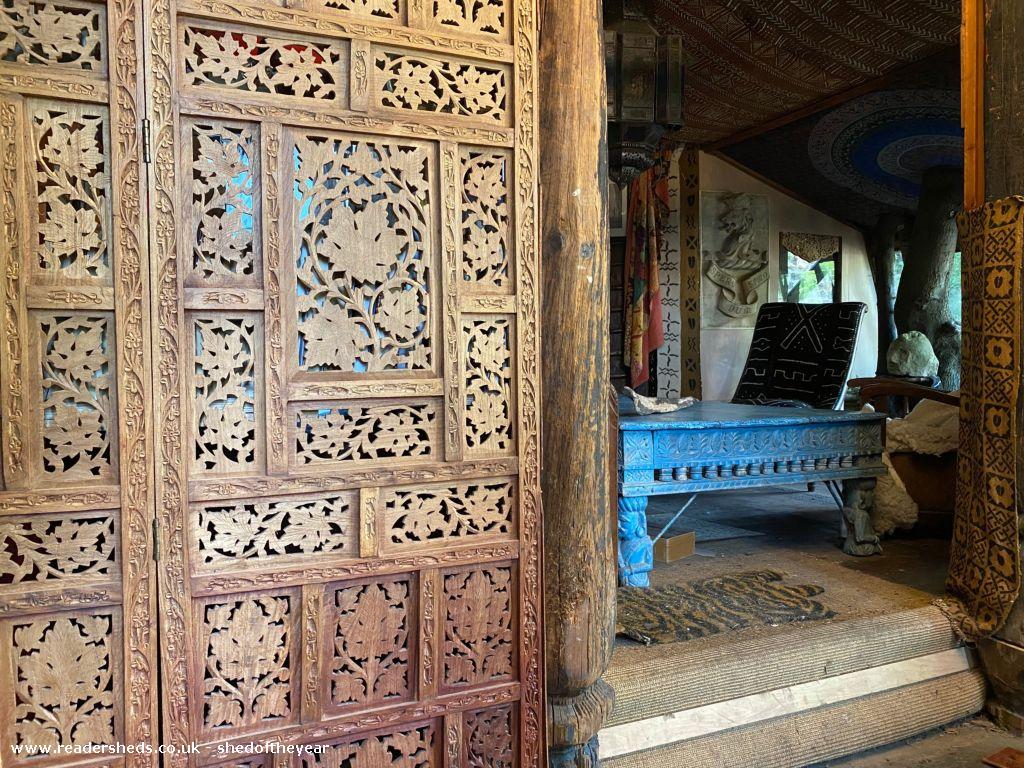 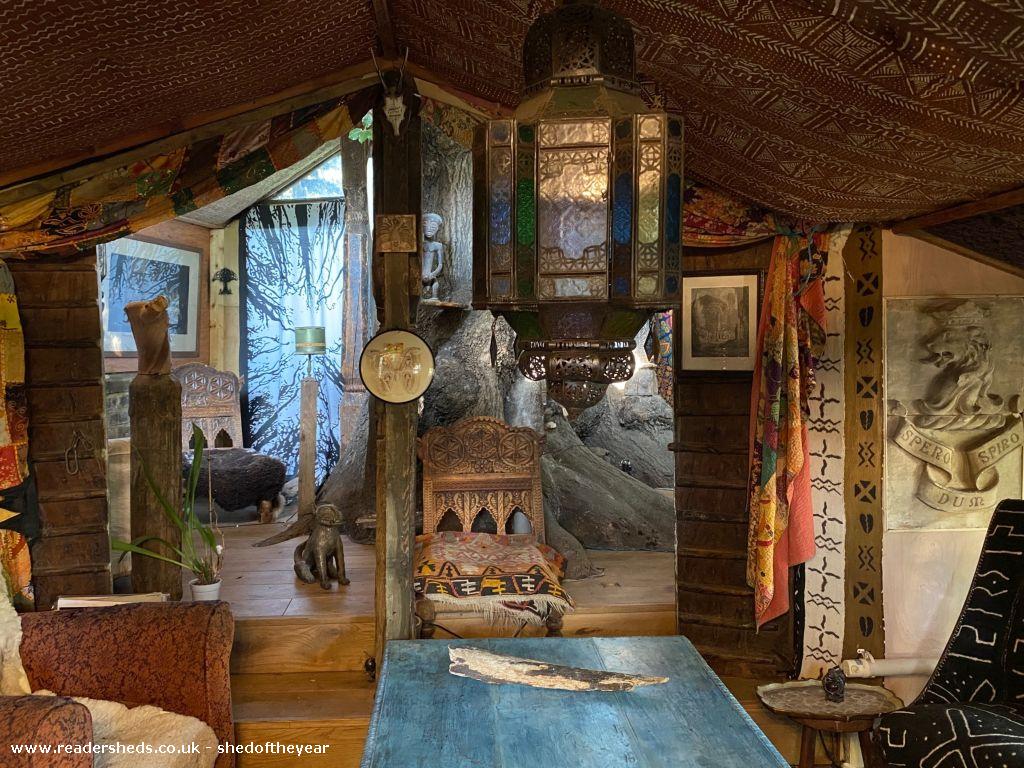 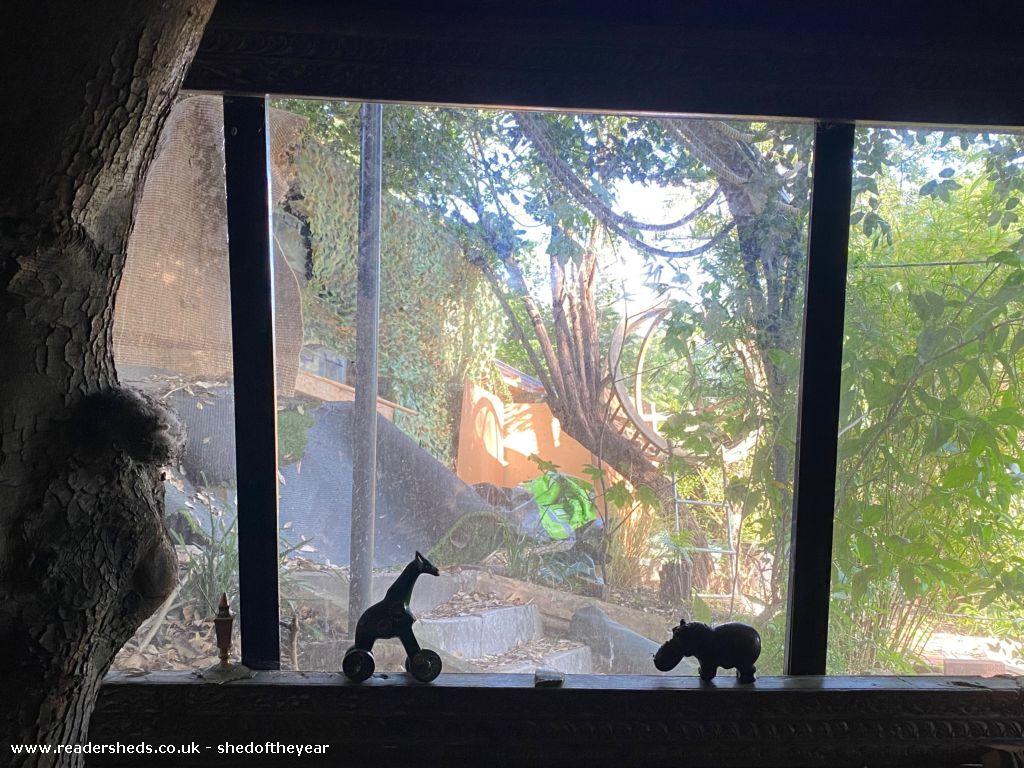 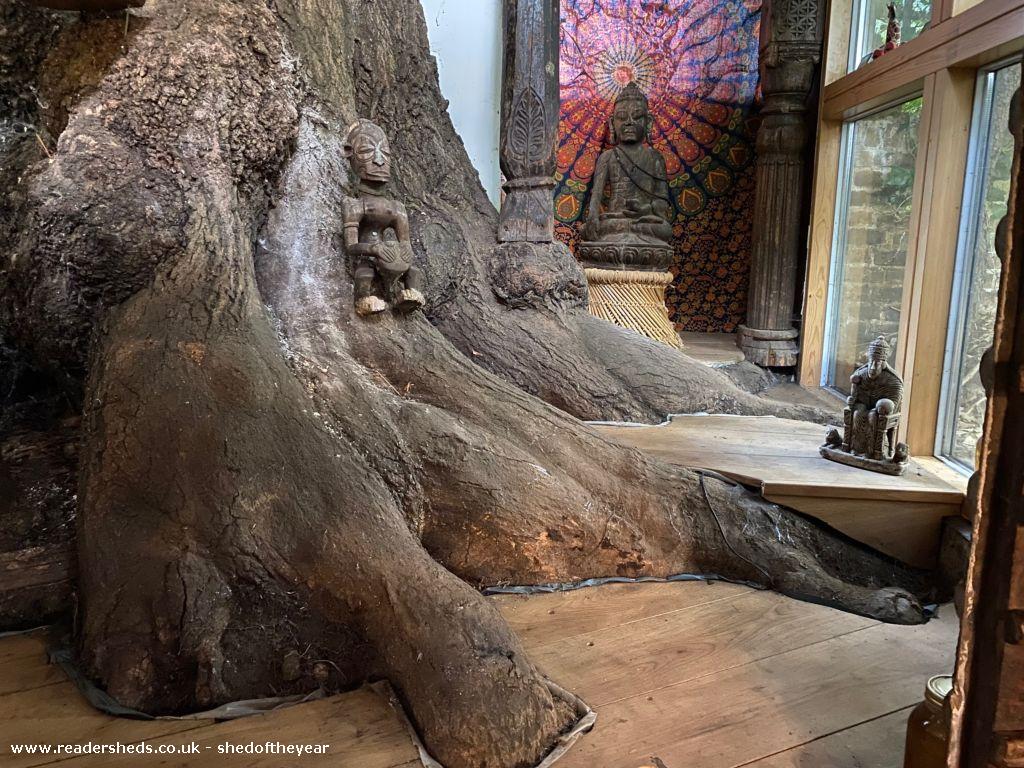 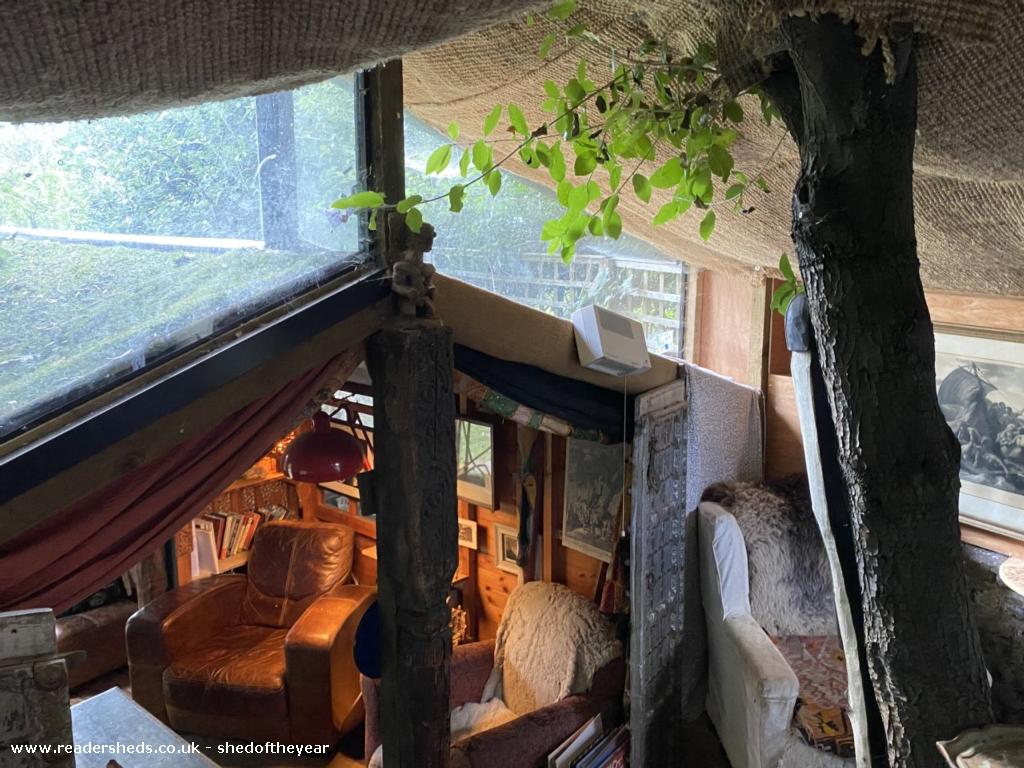 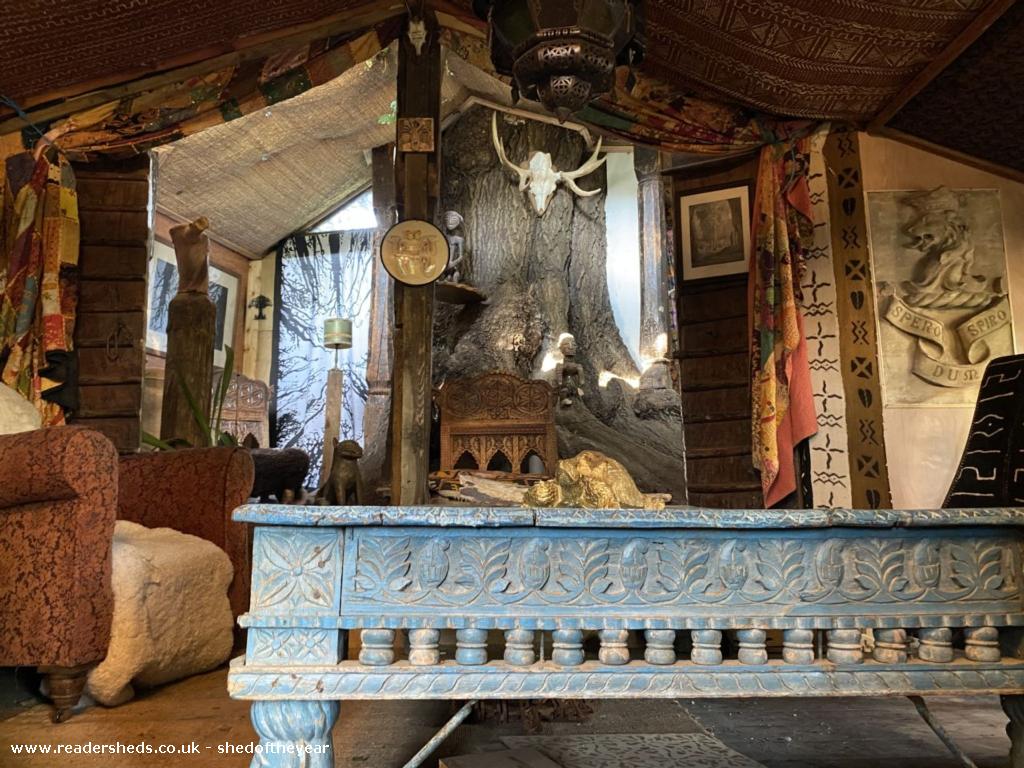 All photos are copyright of the sheddie Daniel Holloway

A peaceful sanctuary to escape our urban surroundings. Ideal for o occasional tree hugging and entertaining.

It means a lot to me, very much a refuge from city living and an ongoing labour of love. Somehow it connects the threads of my life; my upbringing, my love of wild spaces & nature, my aesthetic influences, my love of artefacts and curiosities, my travels and connections with Africa, my photography and finally the place in life I find myself now. Also, it connects the Swedish side of my family (my Mothers side)&&my late Swedish Uncle was a wood carver and many of his pieces adorn the shed as well as an elk skull which my Great Grandfather culled back in the late 1800s.

Lots of metaphorical tree hugging at the height of the lockdown &&.knowing and appreciating what is precious!

It has truly come into its own during lockdown, as a means for all the family to escape the monotony of life stuck at home, my daughter spends time in there listening to music, my son sketching and reading and since the easing of restrictions my wife has had friends over for illicit drink parties.

One thing it has made me realise, the space is definitely an escape not just for me but for the whole family, particularly the children &&.maybe theyll learn a bit more about their Dad by spending some quality time in there = .

As my children enter their teenage years, it has dawned upon me that I will gradually have to relinquish control of it, the lock down has helped me realise and come to terms with this.

Bedouin Tree Shed: Developed over the last 7 years, gradually extending an original standard rectangular back garden shed which we inherited with the house.

Initially a front extension (triggered as a result of a bbq for which the weather forecast was terrible and as a result of not wanting to cancel I decided to build a lean-to structure on to the shed to shelter our guests rather than buy a gazebo which would end up as landfill).

This set into train further 'add-ons' and as a result it grew organically with no particular master plan.

Now we have a shed with no particular cohesive form externally, projecting out at many different angles and sitting at different levels (dictated by the immediate landscape and fauna which surrounds the shed (fauna: mature ash tree, common oak).

Internally it has been decked out with many influences: primarily; African, Indian & Arabic, parts of the world my wife and I have travelled to and lived in over the years before we settled in Blackheath...there is also a touch of Victorian England incorporated into the design .....bits of old pottery for example are incorporated into the fabric of the building (pottery dug up from ground it is built on, now embeded into the concrete wall as an example), also copper plate etchings and butterfly taxidermy adorn the walls.

A chaotic shed from the outside, but serene and calming once you step inside.......almost Bedouin in feel.

Such is the extent of the shed the structure now incorporates two living tree trunks, a brick wall (which forms the boarder between our garden and our neighbours garden).

Finely carved ancient hardwood Indian columns, some purely decorative but some acting as upright supports for the pitched green roof.

Outside willow saplings follow the contour of the shed on front elevation, which during the summer months when the leaves come out form a green screen around the shed so it is hardly visible, only a delicate arch formed by the twisted willow stems allow a glimpse of the door which opens up to a place of wonder and magic.

A wood burning stove set on layered concrete with a large window forming a backdrop welcomes you and provides comfort during the cold Winter months.

An old Victorian cottage door opens up to an Aladdins cave / Bedouin tent.

Sitting comfortably within the canopy of the trees which have become part of the living fabric of the shed, befitting the organic nature of the way the shed has gradually evolved over the years.

The floor is oak plank scribed around the root structure of the majestic ash tree it encases, main roots giving direction of the way the floor is designed at differing levels, every now and again popping above the floor boards to remind you this is living tree (worthy of adoration).

The trunk decorated by a mixture of Victorian taxidermy specimens and African carvings.

At the base of one of the trees, ferns have been planted in free draining soil, bathed in the natural light the generous windows afford (creating a natural habitat within).

The shed is bedecked in old furniture either found in skips or reclamation yards, a few items purchased from Deptford market provide a good mishmash of items from different eras ......all no doubt with a storey to tell.