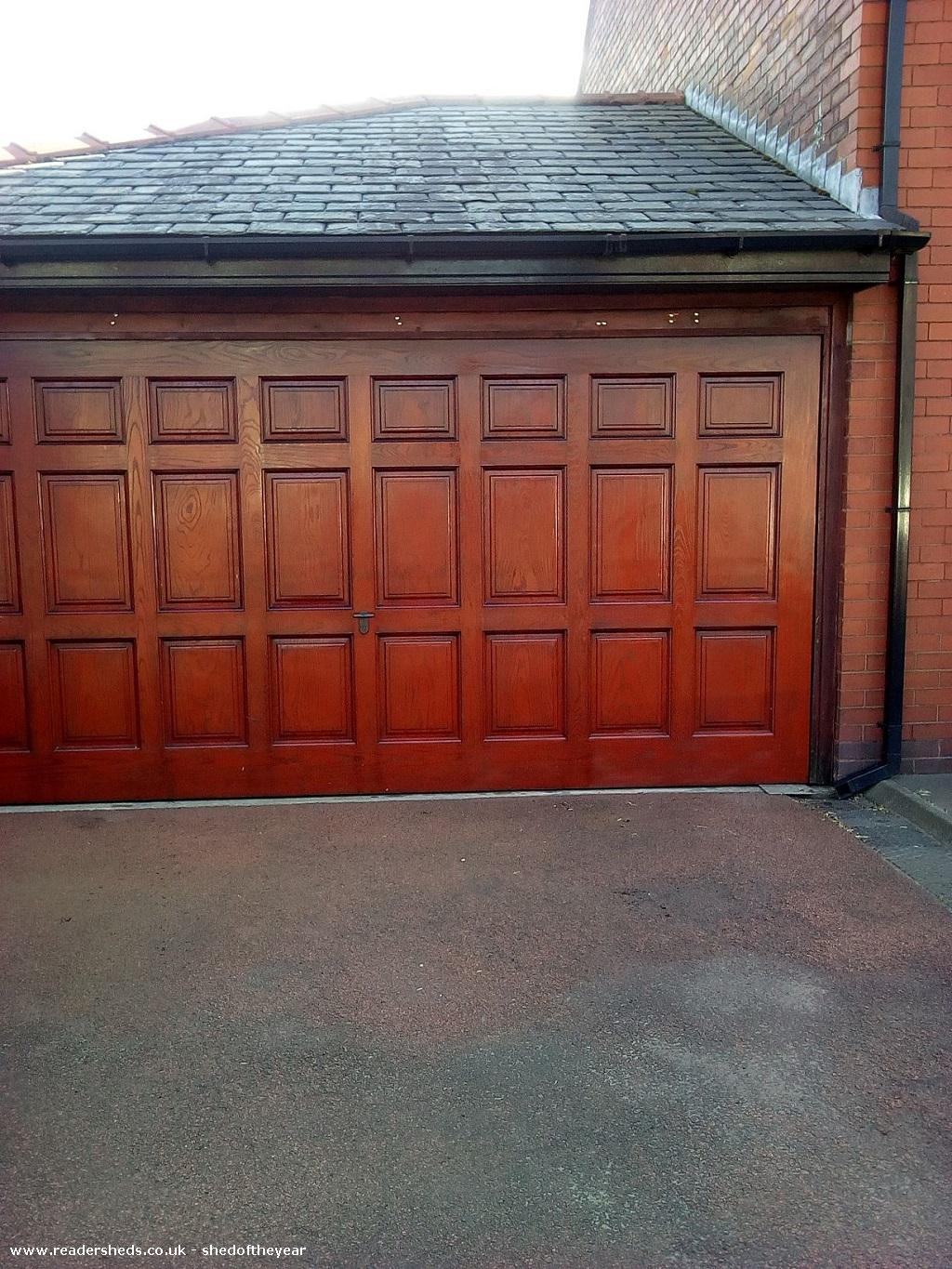 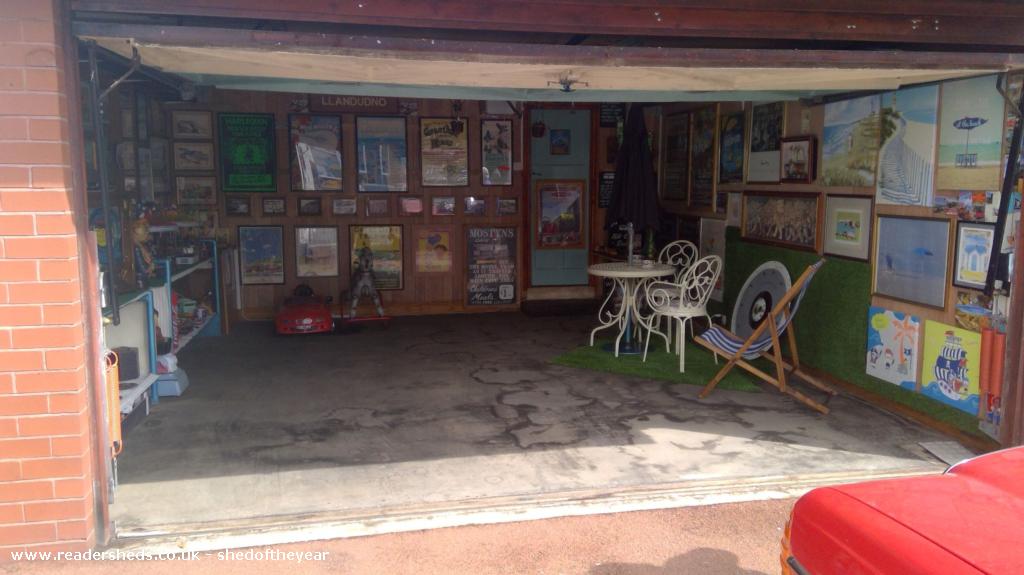 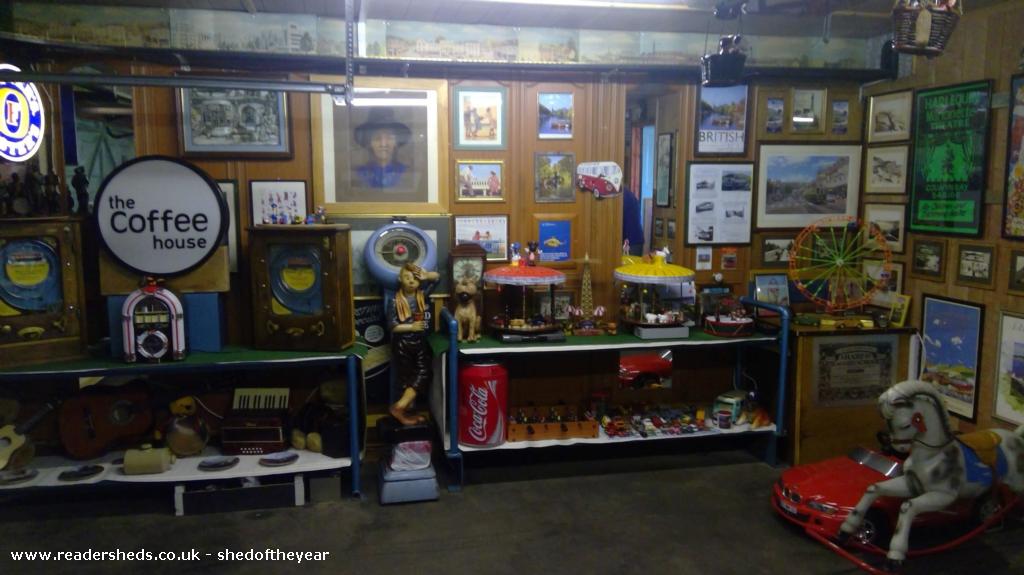 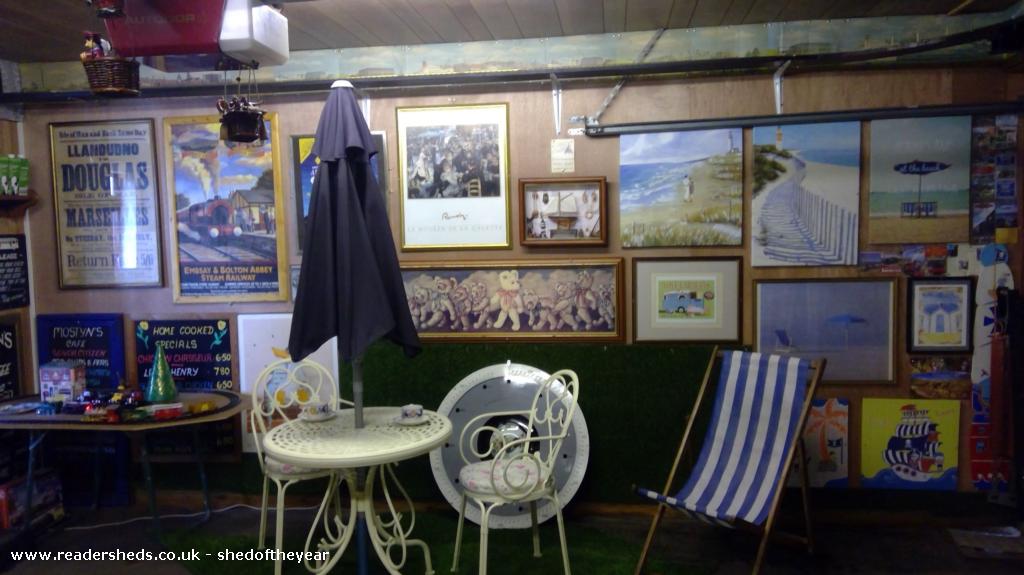 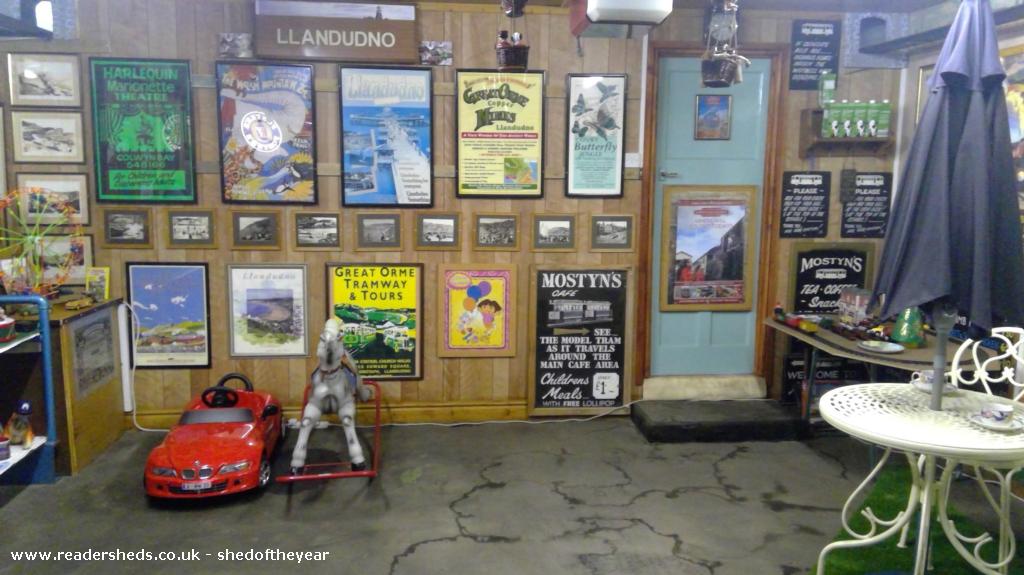 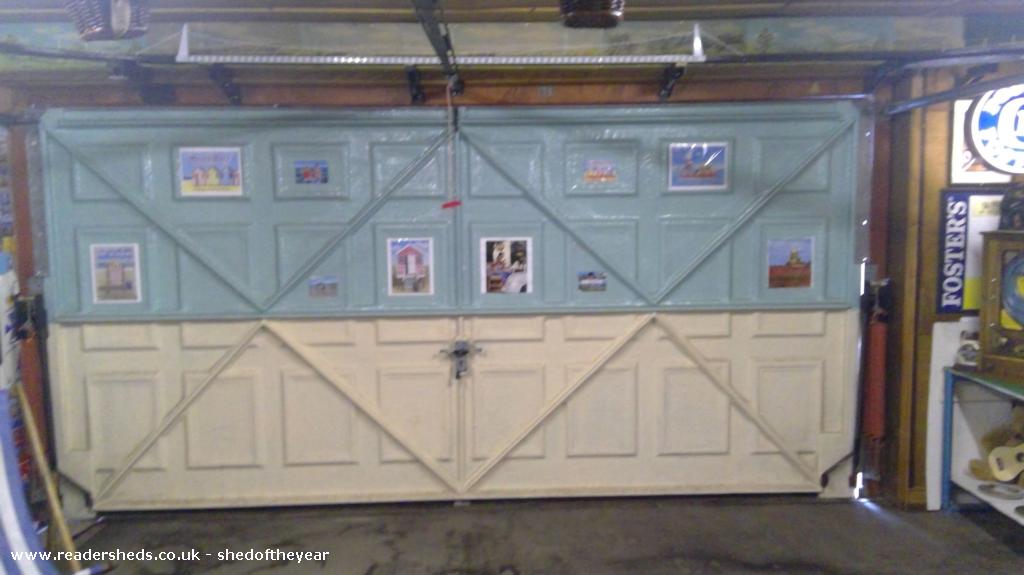 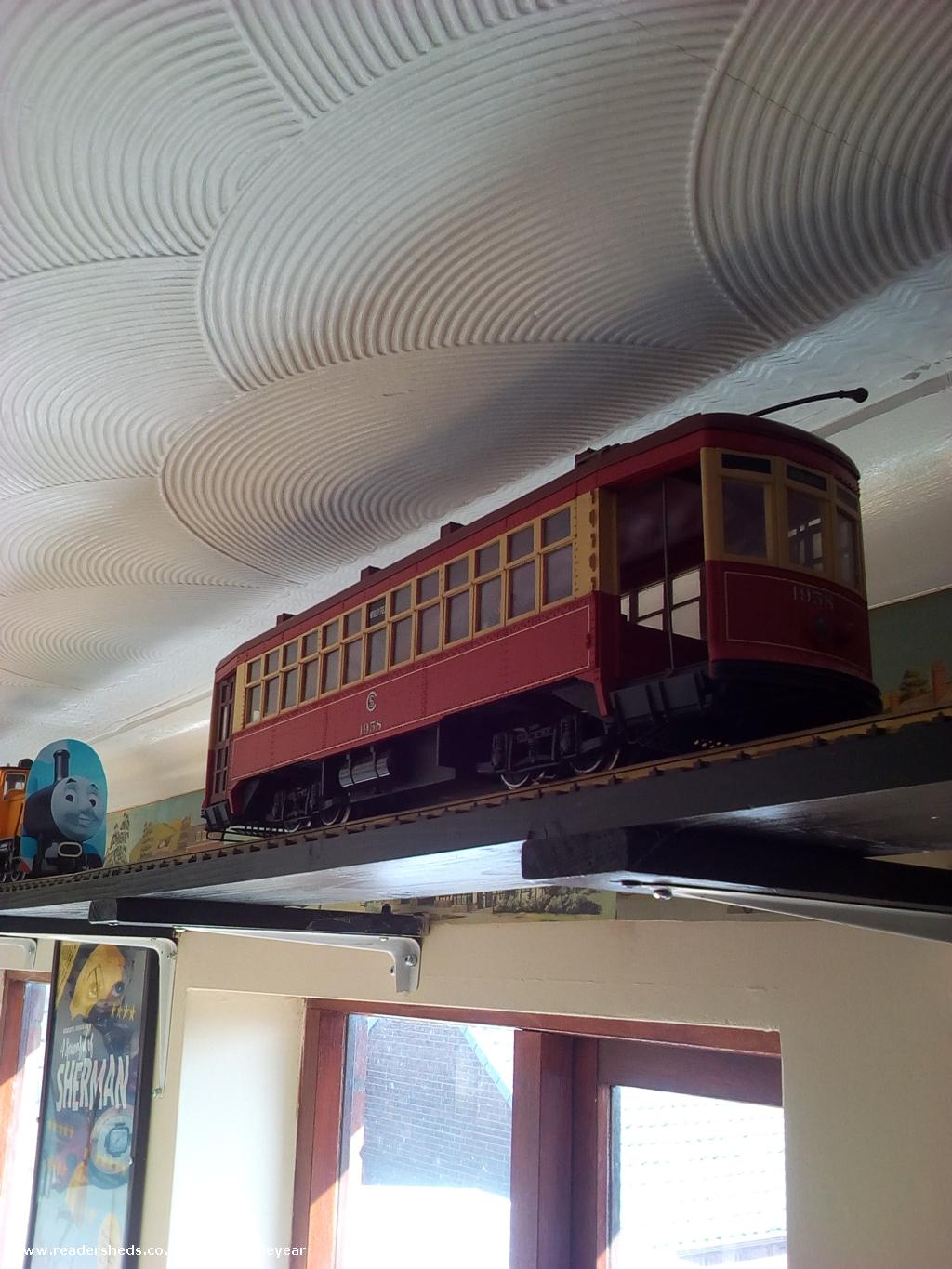 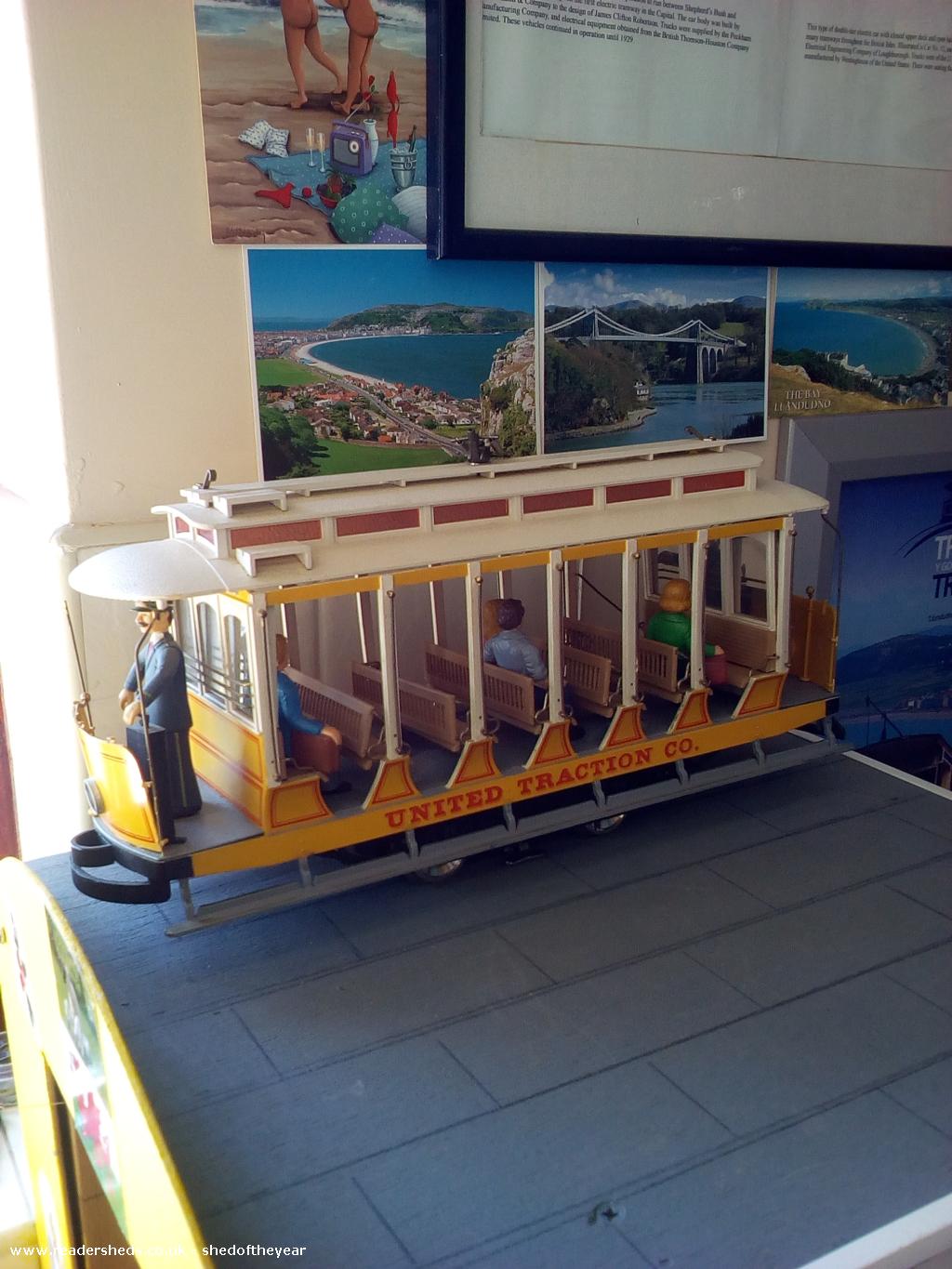 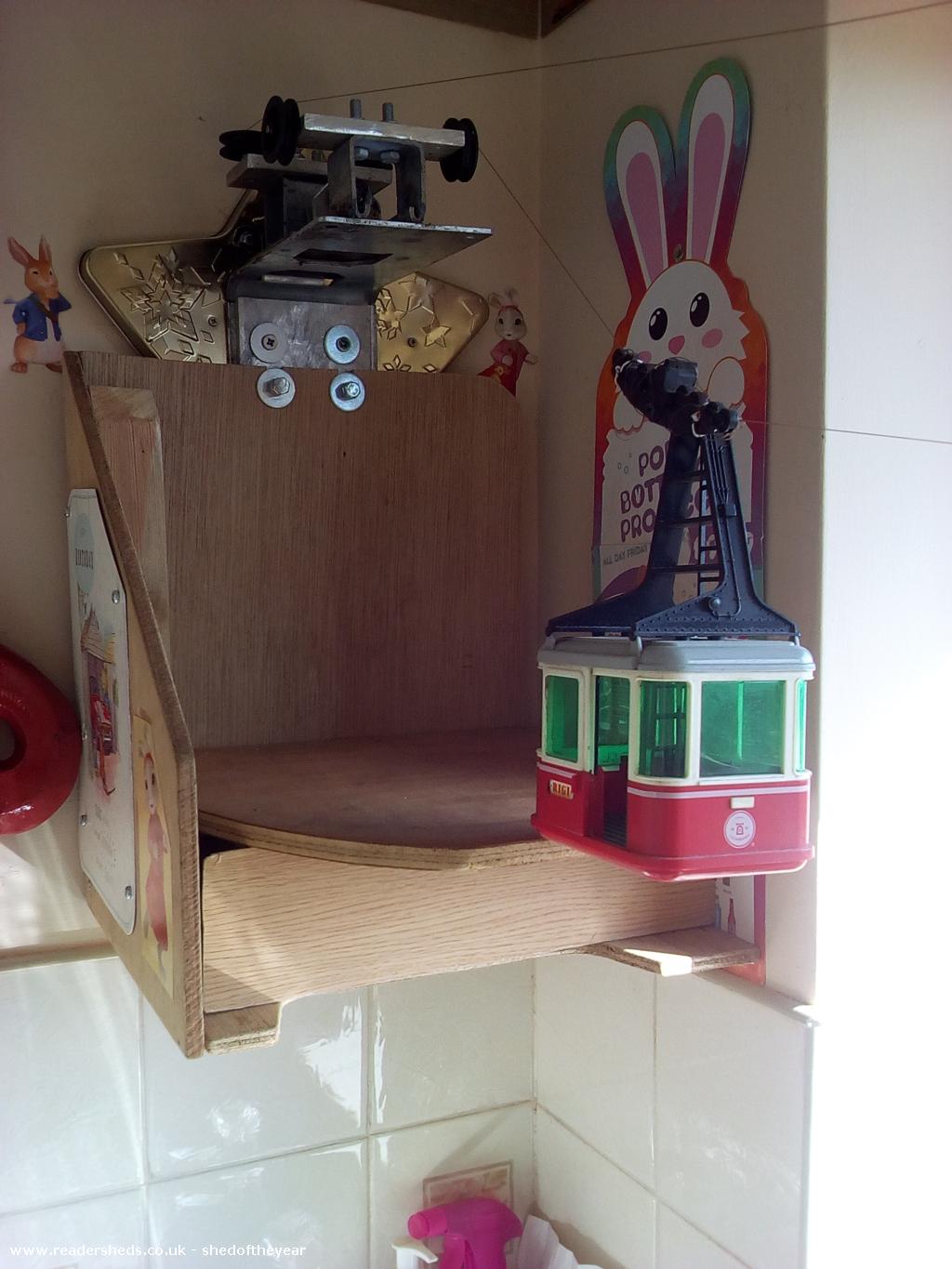 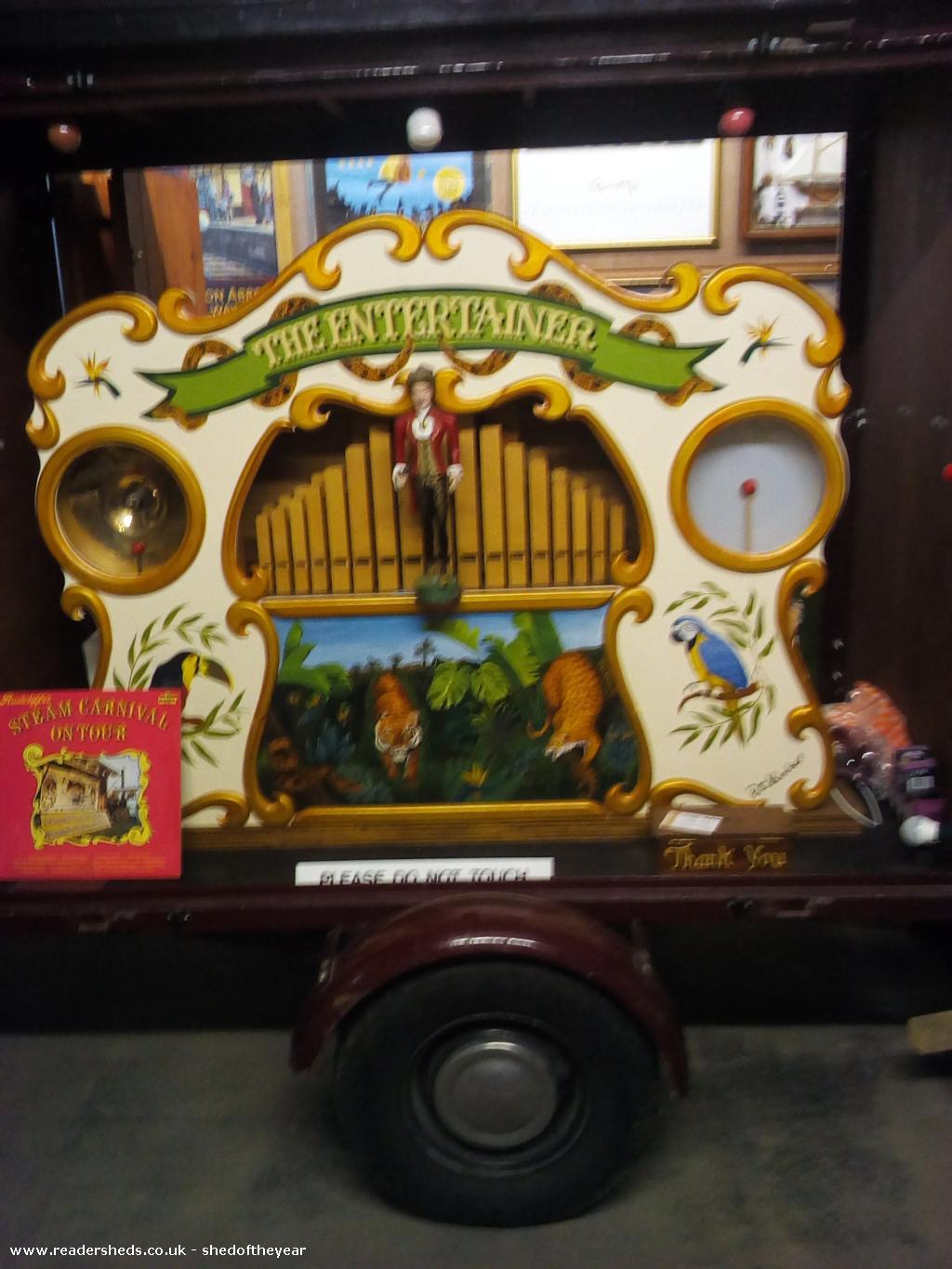 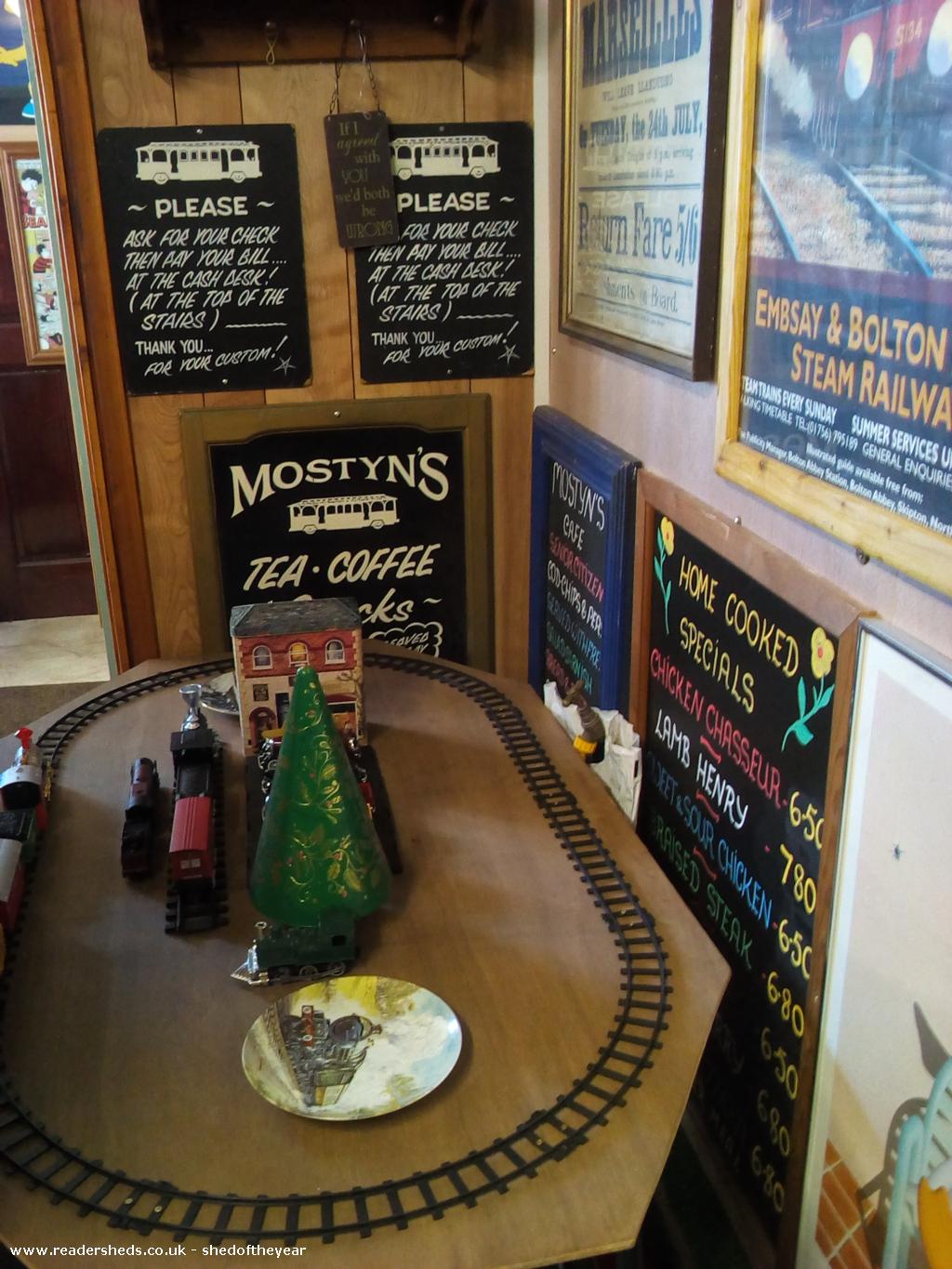 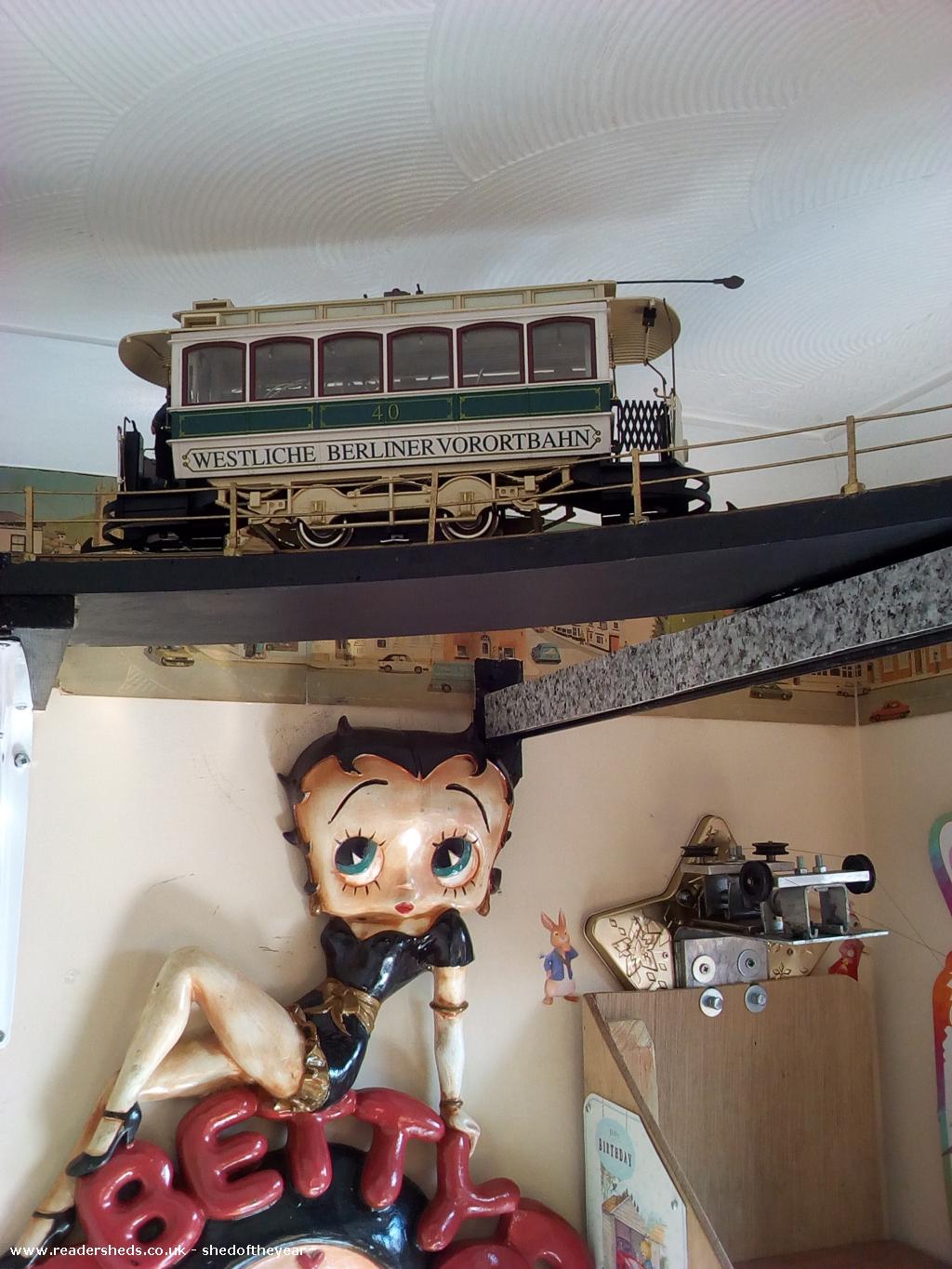 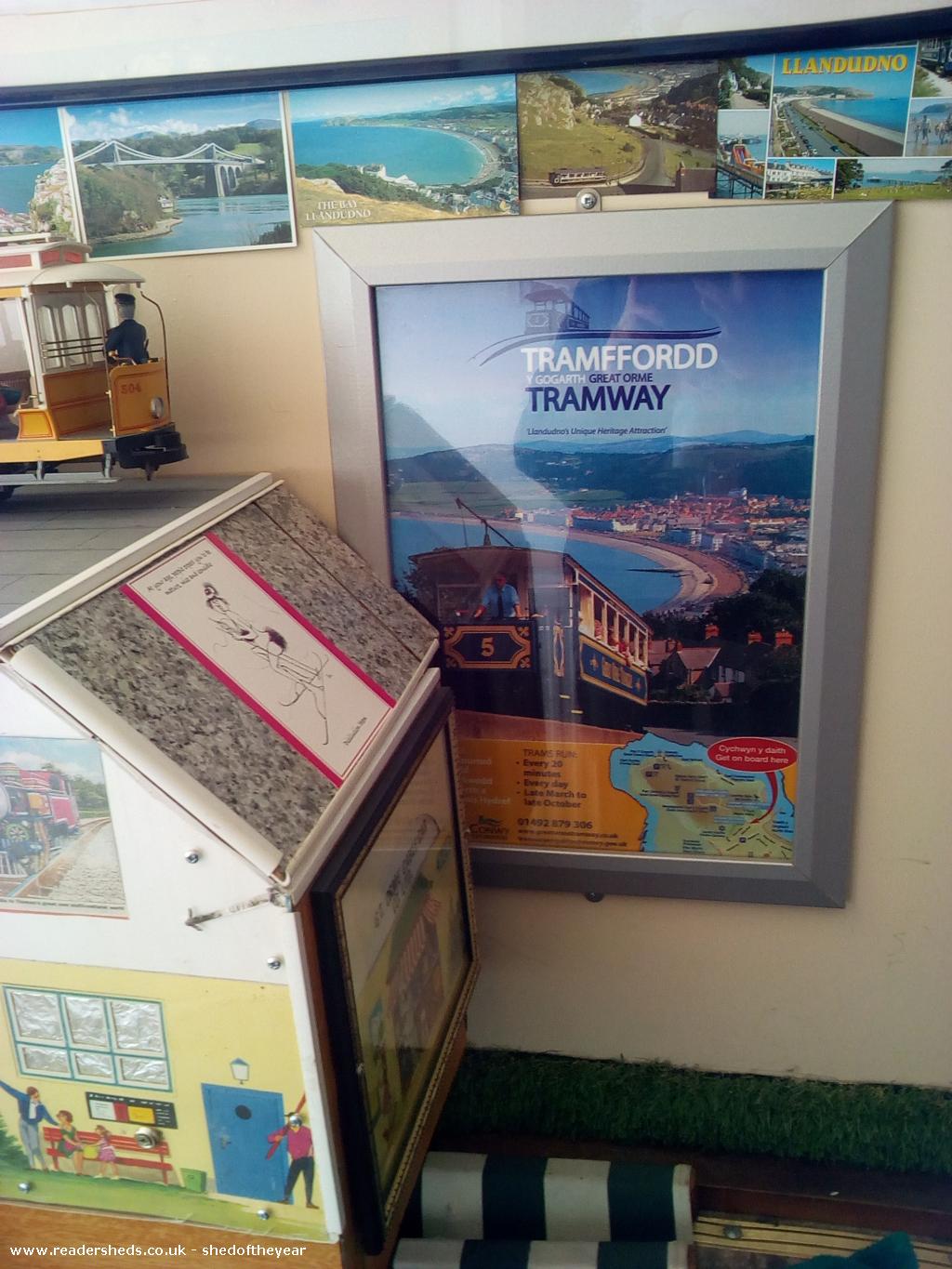 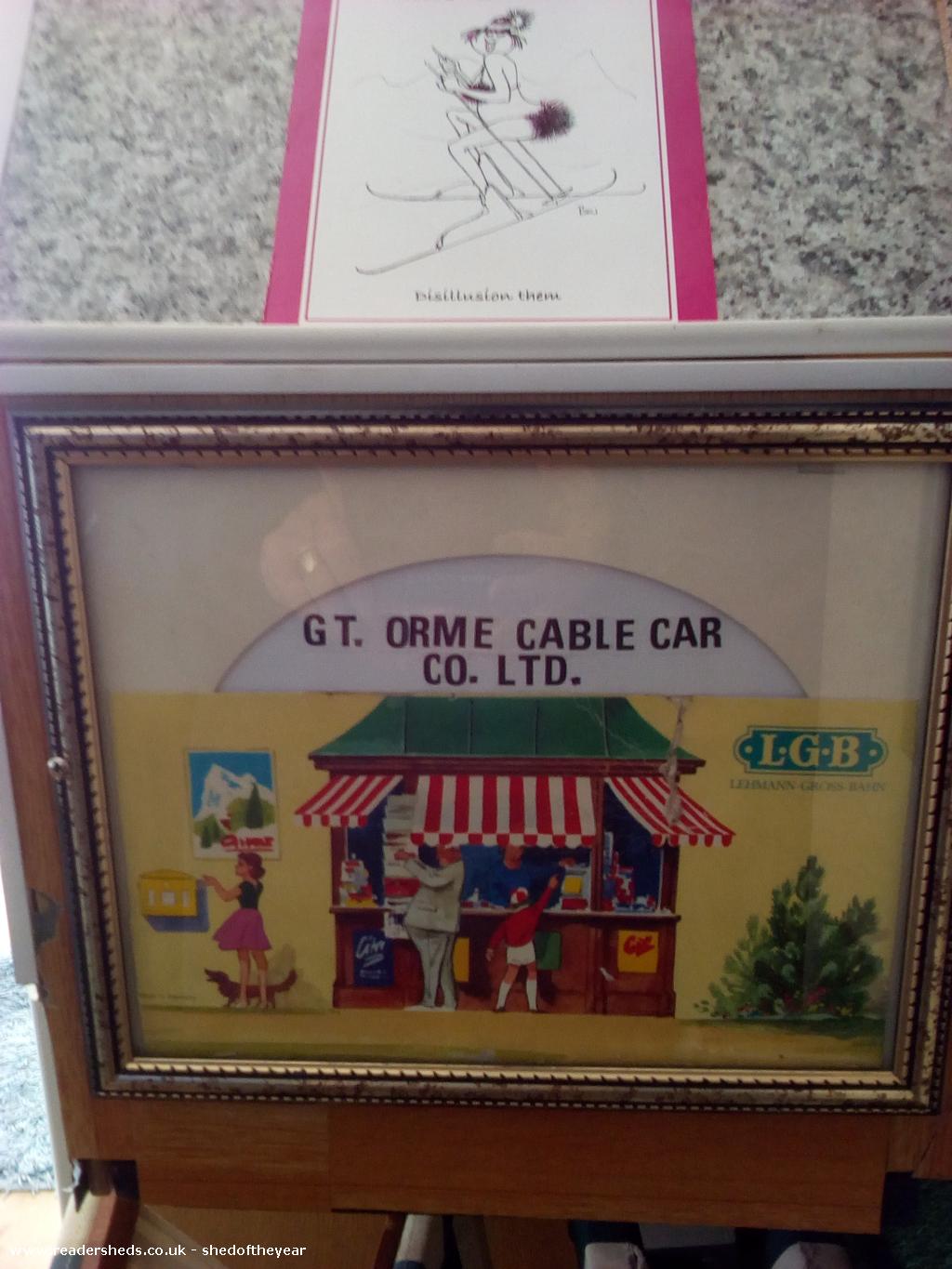 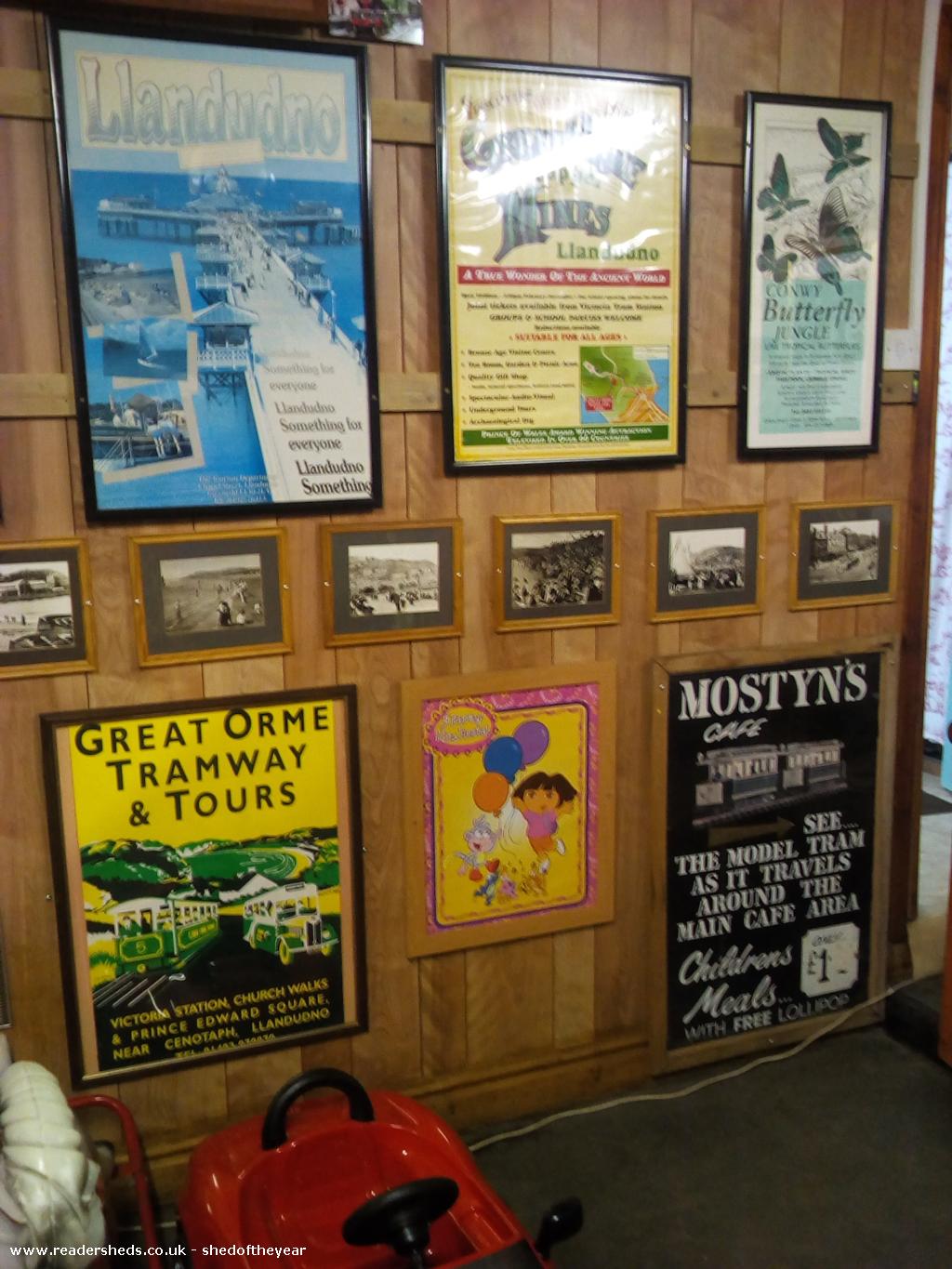 All photos are copyright of the sheddie John Maguire

It all began with a tramway, some trams plus a cable car set replica of the Great Orme at Llandudno. The tramway track is powered by 12 volt electricity supply , brass track mounted on 6" x 1" boards supported by brackets from the walls of the garage. Track is in elevated position to facilitate garaging of two vehicles. The track circuit runs through the garage, through tunnels I created in and out of the adjoining utility room.. Because these items were donated to me from a caf￩ in Llandudno which was closing down together with lots of pictures and posters of Llandudno in times gone by I decided to use the garage and utility room as a home for the tramway which I then began to construct. The project grew from this and I began to collect other interesting pictures and artefacts from charity shops to add to my collection. The other main features are two working musical, carousels which I have created using record decks and scrap materials, a ferris wheel and parachutists modified from charity shop finds which all now work from a coin operated mechanism of my own design and manufacture using one old penny. I have added various other items of interest such as the dancing mice, old toy car collections, musical instruments and an Edison Bell phonograph, with cylinder and brass horn (1904). There are also two working Alwin old penny in the slot machines from circa 1895 which I have fully rebuilt and restored and are in full working order. There is also a coin operated personal weighing machine from 1950 which I have also restored and is in full working order and a Miniature juke box.

From the initial creation of a working tramway and trams, this project grew and grew into a collection of toys and amusements from a bygone era, to what it is today. The miniature Merengue organ in the video was loaned to me to show in my collection for the competition by a really remarkable man who does a great deal of work for the community by taking it to events to raise funds for charity. The Tram shed continues to amuse and entertain our great grand children who find it fascinating as do some adults!