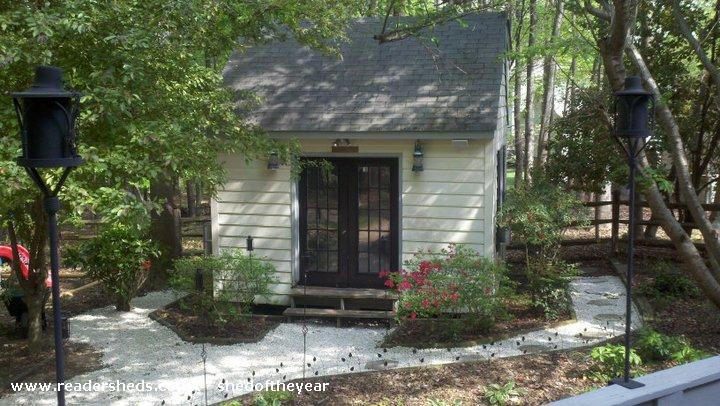 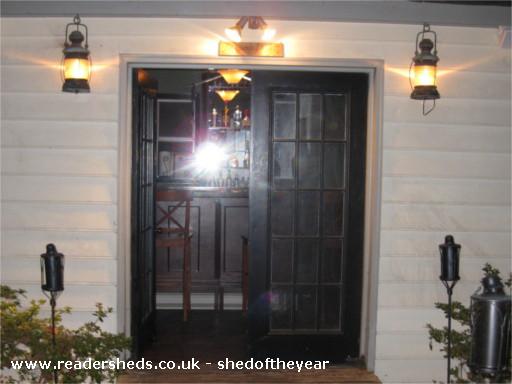 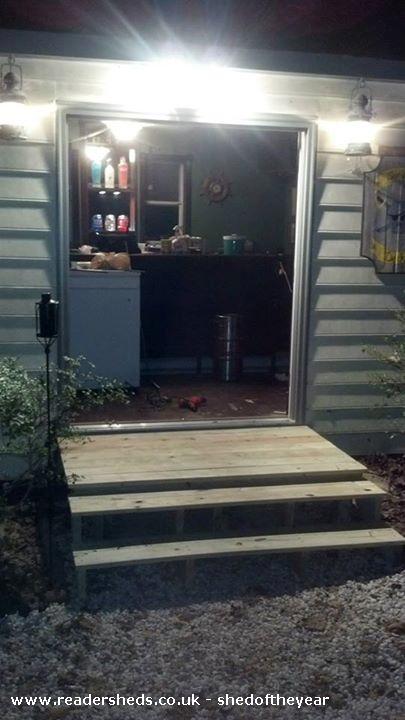 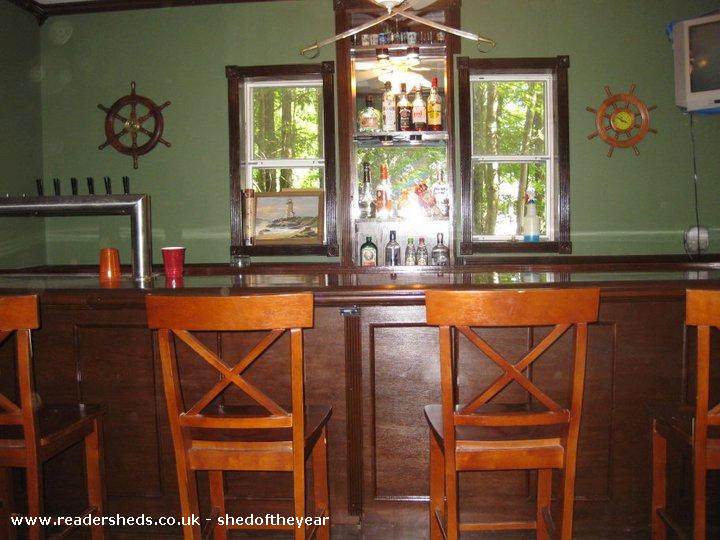 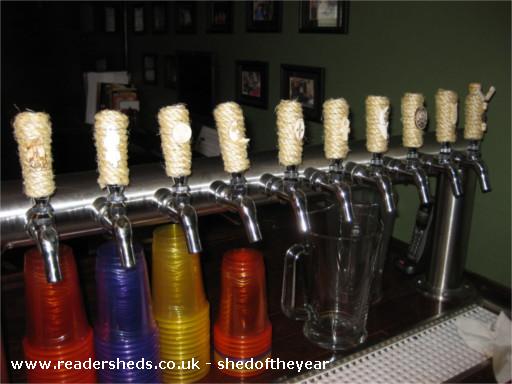 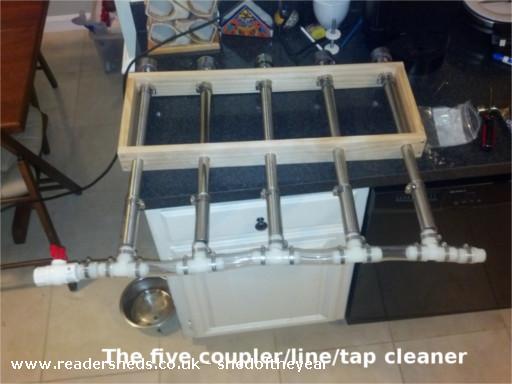 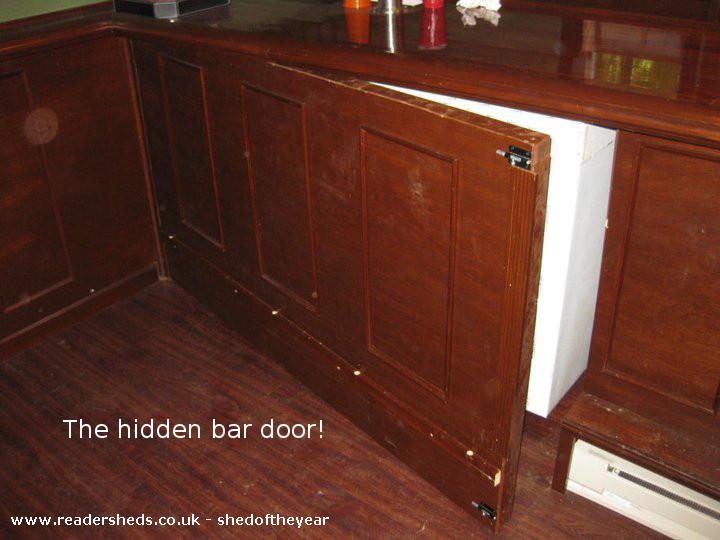 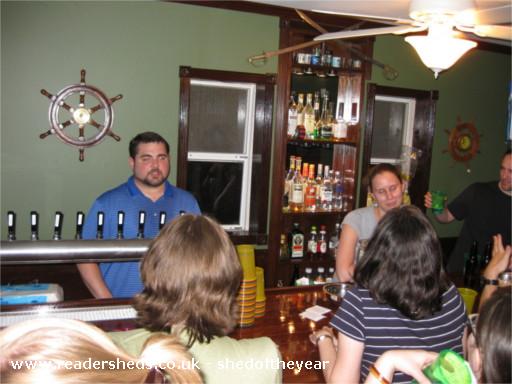 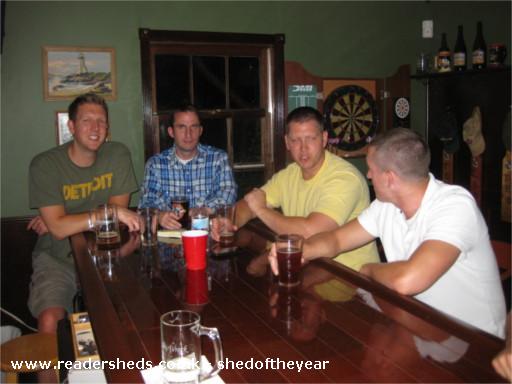 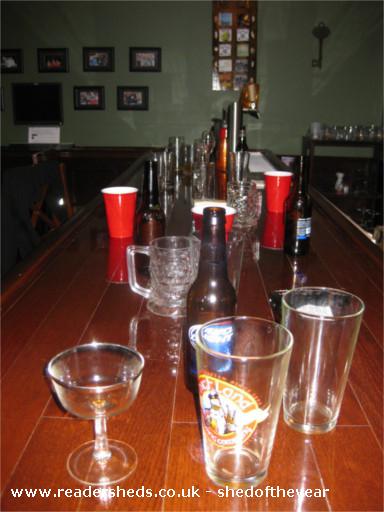 All photos are copyright of the sheddie David Britt

ShipWreck's deck began as a homemade, freestanding bar built into a small apartment in the college town of Chapel Hill. As ShipWreck moved from place to place, the bar went with him, lending character and creating memories in a variety of different homes. Ultimately, ShipWreck (and his bar) got married (to someone else. ShipWreck didn't marry his bar,) and a new home was purchased. ...A new home which, incidentally, had a 150 square foot unfinished workshop in the back yard. Amid much protesting and lamentation from Mrs. ShipWreck, ShipWreck set about making the workshop the bar's new home. Unfortunately, the original bar was poorly proportioned for the work space, and it was sold to new and loving owners. Free to redesign from scratch, ShipWreck engaged in a multi-year process of building the bar shed of his dreams.

The walls were insulated and dry walled. Floor panels were put down over the bare planks, and a finished floor was placed atop that. A new bar was built into the floor and walls, providing a full 10 feet of bar space side to side. The lower halves of the walls were paneled with dark stained wood wainscoting, and the upper half was painted in a warm, earthy green. The bar, naturally, took on a nautical theme; the walls becoming adorned over time with ships' helms, lighthouse paintings, ship's bells, and photos from ShipWreck's time serving in the US Coast Guard. A stainless steel tower with ten taps was added, and multiple kegerators were placed beneath the bar to service them. Recessed liquor shelving was added to the wall behind the bar, and thermostat-controlled baseboard heating was added to keep the place warm during the cold, winter parties. Finally, an integrated sound system was designed and installed, with independently controlled sets of speakers (in-ceiling speakers inside, waterproof speakers outside) hooking up to a wall-mounted tablet. Outside of ShipWreck's Deck is a white- gravel area, with a 10 foot circular stone patio and fire pit to one side.

Though the bar has seen happy duty for small gatherings, it also has been the home to six years of annual WhitBritt Homebrewing Competitions. These competitions featured ten to twelve homebrewers who brought their best and brightest brews to tap within ShipWreck's Deck. Attendees have come from as far away as Texas to take part in the tasting of the homebrews, selection of winners, and [usually] the kicking of all of the submitted kegs. But the venue was not limited to beer, as a local Bluegrass Band entertained the crowds, and other attendees would sell their specialty foods to those gathered in support of the homebrewers.

Though the WhitBritt competition has been retired (much to the delight--if not intention--of Mrs. Shipwreck,) the bar has since been used for small gatherings. It continues to provide no end of frustration to Mrs. Shipwreck, but is a boon to ShipWreck whenever she kicks him out of the house.

A few unique points:
-Given the height of the structure, a ceiling was constructed, flooring was added above it, and a drop-down ladder installed to create an attic space perfect for storing home brewing equipment and other bar goods.
-Given the tight fit of the passage to get behind the bar, the left side of the bar (when facing it) is actually a hidden door. The foot rail pops out, two latches can be thrown, and one half of the bar front (resting on hidden casters) will roll open on hinges, allowing large appliances (like the kegerators and mini-fridge) to slide beneath the bar.
-To facilitate the cleaning of so many taps, a custom line cleaning device was designed and built. It can hook up to five couplers simultaneously, and employs a pump and catch basin to continuously circulate cleaning solution (initially) and then fresh water (to flush the solution) through the couplers, lines, and taps.
-Two legends circulate through the crowds that patronize the bar. The first is the Legend of the Hole. There is a supposed body-sized hole in one wall, beneath a section of wood paneling, where it is said a man once blindsided ShipWreck himself, causing both men to crash into and destroy that section of wall.
-The second is the Legend of The Fire Sleeper. Though those who claim to have actually witnessed the event are few and far between, legend has it that a man once grew weary whilst standing next to the fire pit. Despite a blazing conflagration, the man proceeded to lay down upon the pit, resting briefly. Once his energy was regained, he stood, refreshed and unburned--though with an inexplicably bloody nose.